One of Canada’s more interesting inheritances from the U.K. has been an elaborate system of awards, honours, and titles based on the traditions of British aristocracy. The practice is sometimes called the Canadian Honours System, and it remains an important way for the nation to recognize and celebrate the greatness of its most accomplished citizens. 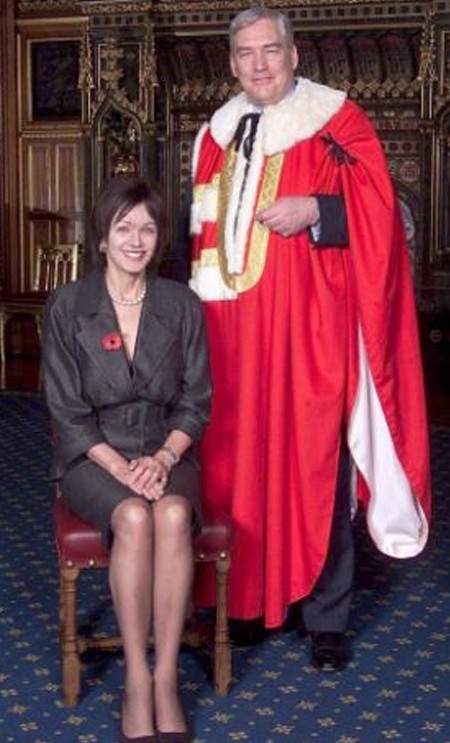 Canada's 1919 ban on British titles remained uncontested until 2001, when U.K. Prime Minister Tony Blair (b. 1953) attempted to appoint Canadian media tycoon Conrad Black (b. 1944) to the House of Lords. Black vigorously challenged the Canadian government's right to deny him the honour, but ultimately failed. In the end, Black renounced his Canadian citizenship in order to become Lord Black of Crossharbour.

During Canada’s early history as a British colony, Britain actively promoted the idea that colonial Canadian society should be rigidly hierarchical, with power concentrated in a clique of wealthy, well-bred aristocrats. Much of colonial Canada’s early elite were thus literal lords, counts, dukes, earls and other members of British nobility imported directly from the U.K. As the years progressed, prominent Canadian-born officials began to earn enough status to be celebrated with British honours of their own. Seven of Canada’s first eight prime ministers were knighted (and one was made a baron), as were dozens of prominent Canadian-born businessmen, senators, bureaucrats, judges, generals and other men of high social standing.

By the dawn of the 20th century, however, some began to feel that Britain was going a bit too far with all of this. Under the administration of British prime minister David Lloyd George (1863-1945, served 1916-1922) in particular, knighthoods and peerages were quite brazenly sold to unaccomplished social-climbers, and the whole idea of titles soon became associated with a corrupt sort of elitism inappropriate for a democratic society. In 1919, the Canadian Parliament passed the so-called Nickle Resolution sponsored by parliamentarian William Folger Nickle (1869-1957), which formally asked Britain to stop offering “any title of honour or titular distinction” to Canadian residents. The policy has remained in place ever since, though it was briefly suspended during the Anglophilic administration of R.B. Bennett (1870-1947, served 1930-1935) — who himself died Canada’s most lavishly-titled PM. 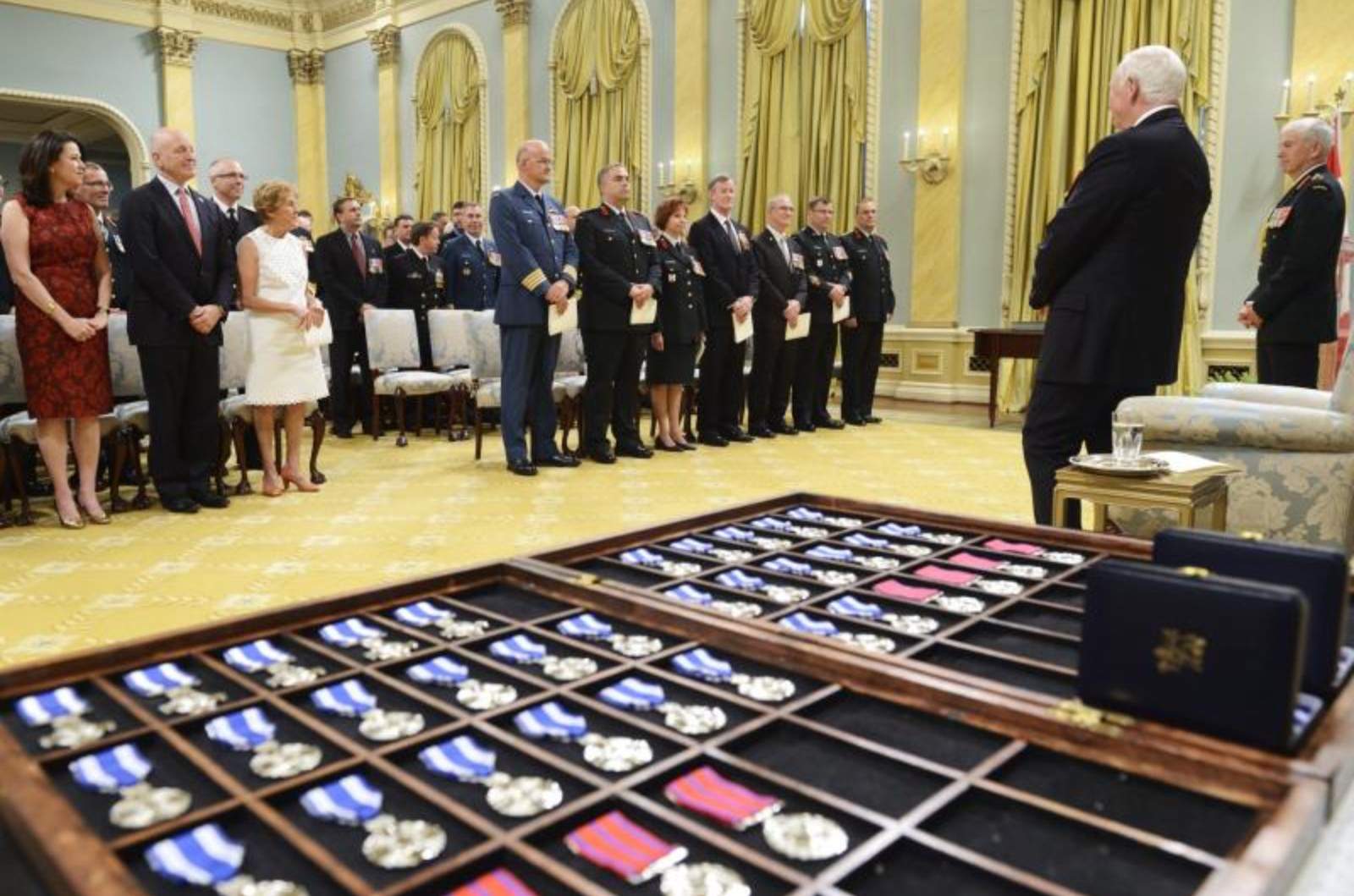 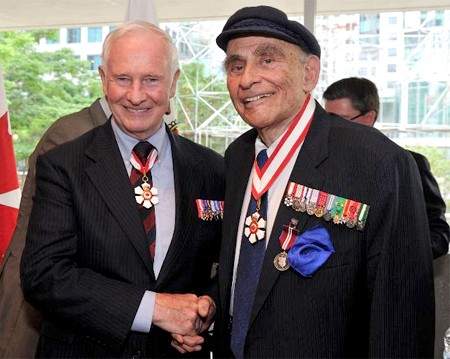 Governor General David Johnston (b. 1941) meets with famed Canadian journalist Peter C. Newman (b. 1929). Both are wearing the many medals they have earned throughout the course of their civilian careers.

The creation, awarding, and wearing of medals has long been a prominent aspect of Canadian civic culture, and today Canada is home to more orders, decorations, and ribbons than many old-school European aristocracies.

Broadly speaking, Canadian medals are divided into two distinct categories: civilian and military. Military medals are self-explanatory: in acknowledgement of service in the country’s armed forces, Canada’s military hierarchy will award its soldiers with special decorations of achievement, with the most prestigious medals given for dramatic acts of bravery or heroism on the battlefield. Civilian medals, meanwhile, are awarded by special government committees to recognize ordinary Canadian citizens who have “made a difference” in their community, sometimes through notable achievements in fields like art, science, or politics; sometimes through impressive acts of charity, compassion, or selflessness.

Winning medals in Canada can be an important social indicator of one’s achievements and importance to broader Canadian society, and a particularly accomplished man or woman may collect many during his or her lifetime. At high society Canadian parties — particularly those that are hosted by the government — wearing lots of medals is a common way of displaying status.

The highest Canadian military honour, named after the late Queen Victoria (1819-1901). For decades, the medal was awarded to Britons and colonials who demonstrated outstanding bravery in times of conflict, including several Canadian soldiers in the two world wars. In 1993, a unique Canadian version was created, but none have ever been awarded.

The civilian equivalent of the V.C., the Valour Cross is awarded to any civilian who displays outstanding bravery or heroism during the course of some more domestic-scale tragedy. Created in 1972, it has been awarded only 19 times — and five of those were posthumous.

Order of Merit / Companions of Honour

The British monarch doesn’t have a lot of powers left, but one of them is awarding these two medals, which are usually given to the most outstanding statesmen of the Commonwealth. Several former Canadian prime ministers have won one or the other (with the Order of Merit being more exclusive), along with accomplished leaders of nations like Australia, India and South Africa.

The most iconic and famous Canadian medal, the Order of Canada was created for Canada’s centennial in 1967 as the first “truly Canadian” award. Today, 100 are awarded every year to important Canadian politicians, celebrities, scientists and artists in recognition of their service. Most famous Canadians seem to win it almost automatically.

Initially, the Order of Canada was intended to honour both military and civilian achievements, but in 1972, it was decided a separate, strictly military order was needed, and the Order of Military Merit was born. Today, it is usually awarded to Canadian soldiers who have held long and distinguished careers in the armed forces.

Order of St. John of Jerusalem

The Order of St. John commemorates service to the St. John’s Ambulance Society, which is a private charity in both Canada and the U.K. that has long enjoyed royal patronage. Its investiture ceremonies are elaborate, and still involve a traditional “sword on the shoulder”-style knighting.

In 2002 Queen Elizabeth II (1926-2022) celebrated 50 years on the throne; in 2012 she celebrated 60. Both times the Government of Canada created special commemorative medals, hundreds of which were given to high-profile Canadians of all walks of life. They are perhaps Canada's two most commonly-seen medals.

In recognition of the fact that not all accomplishment is national, beginning in the 1980s, the various provinces of Canada began to create their own “highest honours,” too, usually called “the Order of [Province name]”. These all celebrate outstanding service to the provincial community, and are often a stepping stone to winning one of the higher honours above.

Excluding the provincial orders and the Order of Merit, all the medals profiled above are formally awarded by the governor general of Canada, who, by virtue of his office, is automatically the nominal head of the various boards and councils that decide who should receive the honours. Medal-awarding ceremonies tend to be one of the most-high profile activities of any governor general’s career and are yet one more example of the tight relationship between modern Canadian awards and historic traditions of British chivalry. 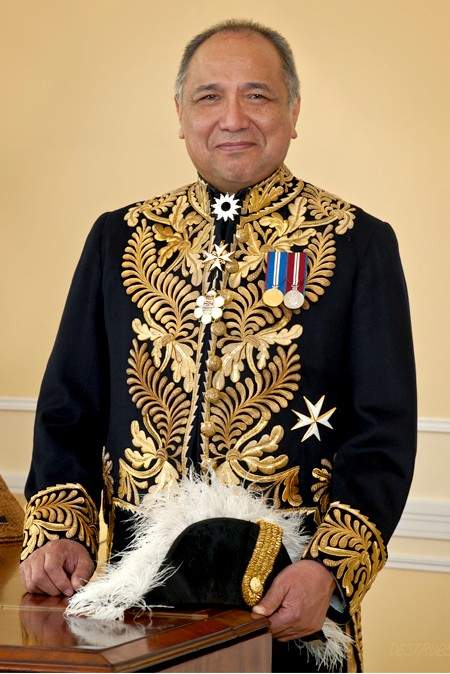 Former British Columbia Lieutenant-Governor Steven Point (b. 1951, served 2007-2012) seen here wearing the Windsor Uniform. Point is unique for being one the few Canadian lieutenant-governors to bring his office's showy uniform out of retirement.

During the long reign of Queen Victoria (1819-1901), which spanned the decades between 1837 and 1901, Britain underwent a phase of great obsession with imperial aesthetics, which brought an unprecedented level of fussiness towards imperial ceremonies and traditions in its colonies. One of the key principles of Victorian imperial aesthetics was that everyone important should wear splendid-looking uniforms so that their rank and status was always very visually obvious. Well into the 20th century, it was common for high-ranking officials within the Canadian government, such as governors general, prime ministers, ambassadors and cabinet ministers — as well as their various aides and advisors — to don fancy uniforms during important ceremonies (which, of course, were happening all the time). The most iconic of these was the so-called Windsor Uniform, a high-collared black tunic with gold braid that was worn by almost everyone important at one time in Canada’s early years.

Things changed significantly after World War II (1939-1945), however, and as Canadian culture became more egalitarian, middle class, and casual, ceremonies became far more relaxed, and the wearing of uniforms was steadily phased out. Today, it’s only the governor general and provincial lieutenant governors who still occasionally don uniforms for special occasions, and even then, the practice is still rare enough for every instance to be noteworthy.

Examples of titles in use

Titles and Forms of Address

Despite the abolishment of formal British titles, Canada has still retained a fairly grand system of titles for its political elites. Canadian politicians and judges of most rank are usually referred to as “The Honourable” (or “The Hon.“) in all official references, while prime ministers, governor generals and chief justices of the Supreme Court are given the added title of “The Right Honourable.” Governors general and their wives/husbands are also given the title “His/Her Excellency,” while mayors of cities are known by the rather ostentatious “His/Her Worship.”

In speech, only the “Worship” and “Excellency” titles are usually spoken (as in, “good morning, Your Excellency…”) while most other politicians are just called by their titles, often prefixed with “Mr.” or “Madam” (as in, Minister Jones, “good morning, Minister/Mr. Minister”). Judges are usually just called “Your Honour,” though in some provinces they still do things the British way, and use the title “My Lord/Lady” or the even more old-fashioned “Mr. / Madam Justice [name],” as in “Mr. Justice Jones.”

Any Canadian who has won a special medal is usually entitled to certain “post-nominals,” which is to say, letters after their names. For instance, “Robert Smith, O.C.” for a holder of the Order of Canada. All sorts of other institutions in Canadian society do this as well; lawyers of the King’s Counsel rank put “K.C.” after their name, members of the Privy Council put “P.C.,” and people who are particularly proud of their academic credentials may tack on a “PhD” (doctorate degree), “MA” (master’s degree)  or even “BA” (bachelor’s degree). How far you’re willing to go depends on how much personal pride you happen to have.

More about Canadian Medals and Honours 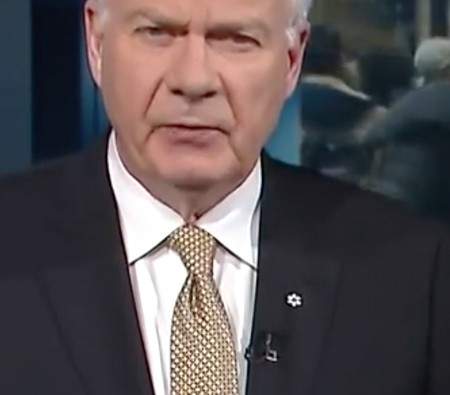 Wearing big medals can look a bit ostentatious, so most Canadian medals also come in smaller, lapel pin form. Many Canadians of status wear lapel pin medals every day, such as famed news anchor Peter Mansbridge (b. 1948), seen here in an evening broadcast wearing his Order of Canada medal. 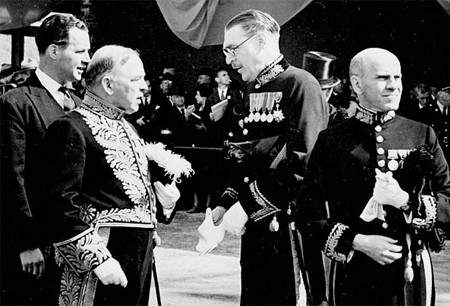 Prime Minister Mackenzie King (1874-1950, left) speaks with other uniformed government officials as they await the arrival of King George VI (1895-1952) during his 1939 state visit to Canada.

Wearing big medals can look a bit ostentatious, so most Canadian medals also come in smaller, lapel pin form. Many Canadians of status wear lapel pin medals every day, such as famed news anchor Peter Mansbridge (b. 1948), seen here in an evening broadcast wearing his Order of Canada medal.

Prime Minister Mackenzie King (1874-1950, left) speaks with other uniformed government officials as they await the arrival of King George VI (1895-1952) during his 1939 state visit to Canada.