High Culture and Art in Canada

As a young, solidly middle-class nation with humble immigrant beginnings, the creation of a distinctly Canadian style of “high culture,” which is to say, distinct Canadian traditions of art, literature and theatre, has been a long, slow journey. For most of Canadian history, Canada’s most wealthy and elite citizens simply imported the finest paintings, books and plays from Britain and Europe (and later, America), and were openly disdainful of Canadian “amateurs” who clumsily tried to copy.

Things began to change in the early decades of the 20th century, when a growing sense of nationalism, sparked by the two world wars, suddenly turned the creation of “Canadian culture” into a major priority of the federal government. From henceforth, Canadian artists, writers and playwrights became more respected, acclaimed and — most significantly — subsidized, and several interesting Canadian “high culture” traditions emerged as a result. 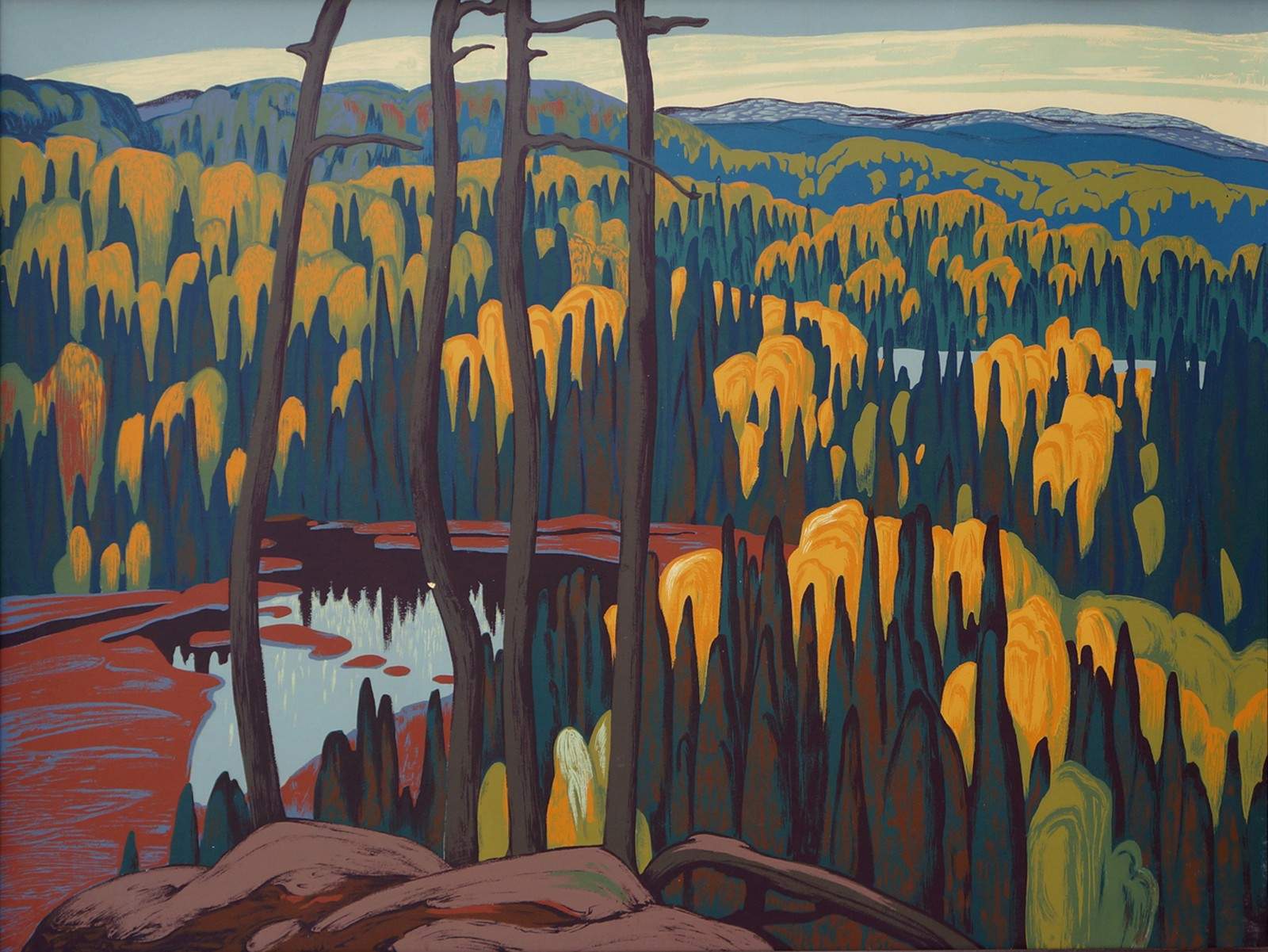 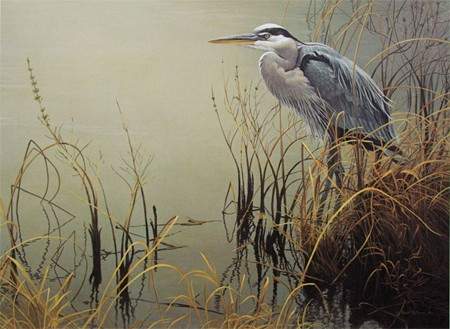 Along with landscapes, photo-realistic paintings of animals have long been a mainstay of Canadian art, though these are often more popular with ordinary people than art critics. Robert Bateman (b. 1930) has spent decades as Canada's most popular animal painter, with a widely-emulated style that has helped define a genre. Prints of his work can be seen in living rooms and on jigsaw puzzles across the nation. Seen here, "Great Blue Heron" (1978).

If there’s a defining style of Canadian visual art it’s probably the landscape. Canada’s exotic natural beauty was tremendously alluring to European artists in the 19th century, and the earliest, most famous works of Canadian art are heavily romanticized depictions of lush eastern Canadian landscapes painted by European immigrants like Paul Kane (Ireland, 1810-1871) and Cornelius Krieghoff (Holland, 1815-1872). By the early 20th century depictions of the Canadian landscape gradually became more harsh and realistic, as Canadian-born artists sought to depict more accurate and varied scenes of nature, including barren, skeletal trees, drab, rocky cliffs, and colorless, flat prairies capable of evoking the same grim and melancholy feelings that came from living alongside them. The most famous artists of this latter tradition were the so-called Group of Seven, seven artists who produced a number of great pseudo-impressionist works in the 1920s and 1930s. Though not a formal member of the Seven, Emily Carr (1871-1945) and Tom Thompson (1877-1917) remain almost equally acclaimed for producing similar work during the same period.

In the latter half of the 20th century, the Canadian art scene greatly diversified, moving away from depictions of nature and towards new, experimental styles that often didn’t depict anything in particular. In Quebec, a group of abstract artists headed by Paul-Émile Borduas (1905-1960) known as the the “Les Automatistes” earned acclaim for their radical canvases that contained nothing more than splatters, shapes, and bright colors. More traditional subjects and styles also remained popular, however, including the dark and dreamlike depictions of Canadian life painted by Alex Colville (1920-2013), the haunting landscapes of Christopher Pratt (b. 1935), and the photorealistic depictions of animals and their habitats by Robert Bateman (b. 1930, see sidebar).

Today, virtually every art tradition has practitioners in modern Canada, from still lifes to the wild mixed-media works found in modern art museums like the National Gallery in Ottawa, or Toronto’s Power Plant Contemporary Art Gallery. 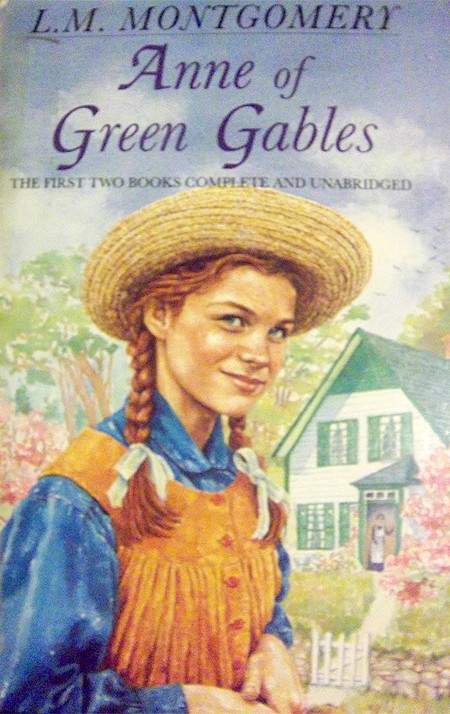 The most famous Canadian book of all time is undoubtably "Anne of Green Gables" (1908), a short children's novel about an orphan girl and her adventures on Prince Edward Island. Written by Island native Lucy Maud Montgomery (1874-1942) it became a global sensation, selling over 50 million copies worldwide and spawning numerous sequels, as well as a TV series, a movie, stage plays, musicals, dolls, and much of the Prince Edward Island tourism industry.

Canadian literature is almost entirely a late-20th century phenomenon. Though the Victorian era (1837–1901) saw Canada produce a few moderately famous poets like Charles G.D. Roberts (1860-1943), William Henry Drummond (1854-1907), and Pauline Johnson (1861-1917) who wrote romantic verse about the vast country and its nature, most 19th century Canadian authors were generally overshadowed by the great British and American writers of the time. The end of World War II (1939-1945), however, saw the emergence of a distinctive Canadian tradition of novel writing, the so-called “Can-Lit” school, entrenching a number of iconic Canadian literary themes and tropes that will be well-known to any Canadian high school student force to study them.

At the dawn of the 20th century, large segments of the Canadian population were still living rural, agrarian lives. For these struggling families — frequently the offspring of poor immigrant pioneers — daily life was often a harsh schedule of grueling chores and physical labour. The country’s cold, harsh climate and desolate environments provided little comfort, while economic uncertainty spawned anxiety for the future. It was these cheerful themes that authors of the distinctive Can-Lit tradition began to explore, with authors like Robertson Davies (1913-1995), Margaret Laurence (1926-1987), Alice Munro (b. 1931), and Margaret Atwood (b. 1939) writing grim novels that were often heavily inspired by their own lives and families.

In recent years, Canadian literature has become a lot more diverse, both in terms of the people writing it and the themes they explore. Contemporary Canadian authors like Douglas Coupland (b. 1961), Yann Martel (b. 1963), and Michael Ondaatje (b. 1943) have earned great fame writing novels set in foreign countries, ancient history, or the distant future, with plots that often have little or nothing to do with Canada.

Along with literary fiction, Canada also has a strong (perhaps stronger) tradition of prominent non-fiction authors whose works of journalism, philosophy, academic criticism, or social and political commentary have made a considerable impact on global intellectual life. Among the notable include famed media theorist Marshall McLuhan (1911-1980, discussed in more detail in the famous Canadians chapter) the liberal economist John Kenneth Galbraith (1908-2006), literary critic Northrop Frye (1912-1991), and immigration and multiculturalism philosopher Charles Taylor (b. 1931).

A few American intellectuals such as urban studies scholar Jane Jacobs (1916-2006), self-help guru Eckhart Tolle (b.1948), social theorist Malcom Gladwell (b. 1963) and anti-capitalist critic Naomi Klein (b. 1970) are sometimes considered “Canadian authors” as well, due to the fact that they lived at least part of their adult lives in Canada, and have made clear that the experience left lasting influence on their work. 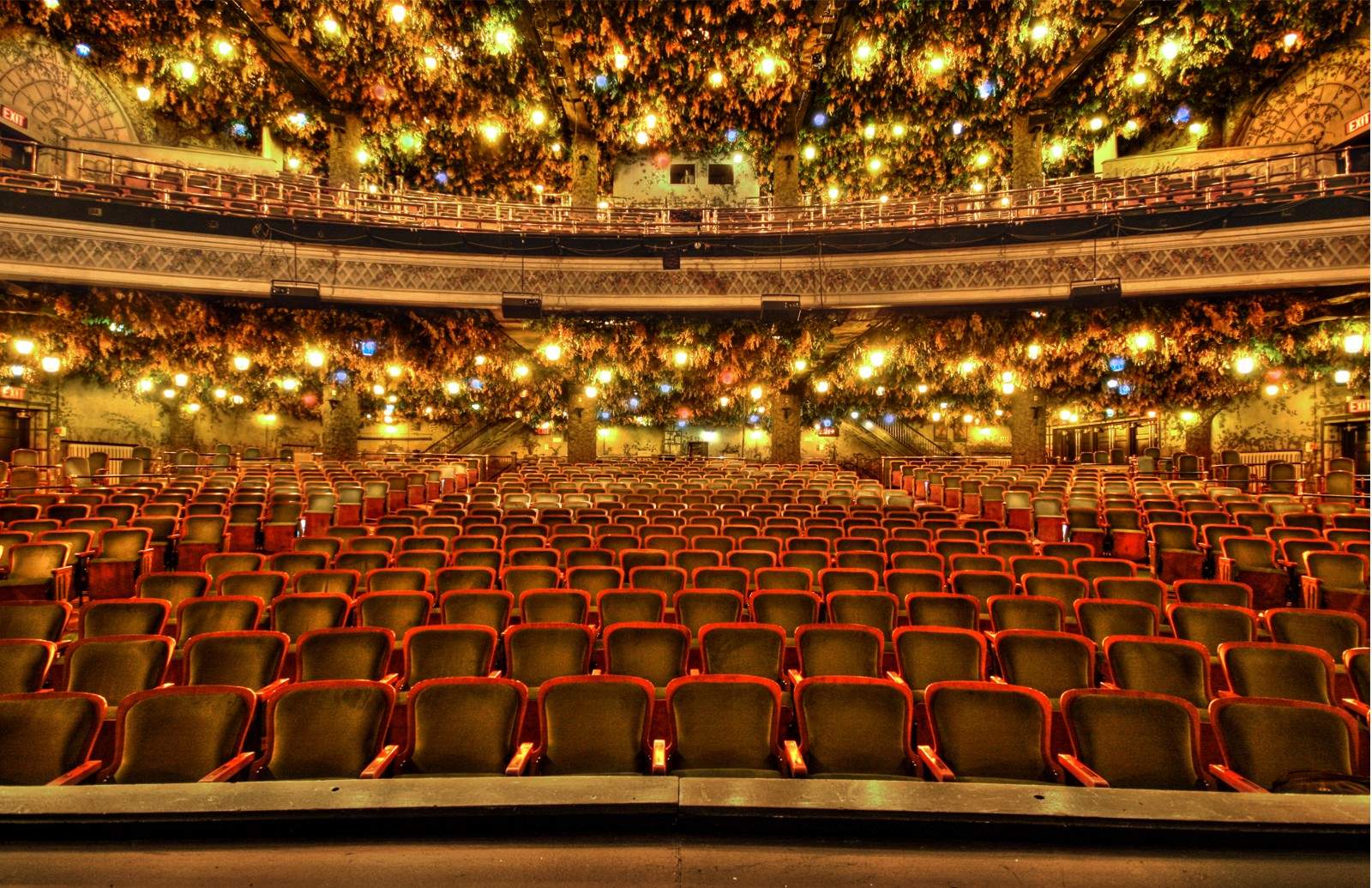 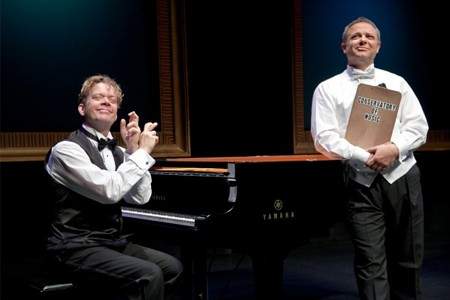 One of the most successful Canadian plays of all time, 2 Pianos 4 Hands (1996), is only a slight twist on the one man show, with two actors playing a vast array of characters as a story is told of two Canadian boys who dream of becoming famous concert pianists.

Though it’s not hard to catch a big-budget Broadway show in Toronto, Vancouver, or Montreal, it’s the smaller-scale, more intimate style of plays that have come to define Canada’s own theatre tradition. As is the case with so much Canadian “high culture,” however, this distinct style was a long time coming; most consider the “Golden Age” of the Canadian stage to have only begun in the 1960s.

Many of the themes explored in Canada’s most famous plays tend to be similar to those explored in “Can-Lit” (see above), which is to say, sentimental, nostalgic and often dreary recounts of rural life, family drama and early 20th century history. This interest in telling deeply personalized, highly descriptive stories has made the one man show, where a single actor narrates a long, anecdotal life story, one of the most iconic arts of the Canadian stage. Billy Bishop Goes to War (1978), perhaps Canada’s most famous play, is a notable example, and features a single actor playing no less than 18 parts as he recounts the true story of a rural Canadian boy who went on to become Canada’s most decorated fighter pilot in World War I (1914-1918).

Today, almost all Canadian cities of any significant size will possess their own theatre companies, which perform a variety of plays of both domestic and foreign origins. Most large cities will also host a fringe festival once a year in which stage performers from both within the community and around the world take over venues across the city to perform a variety of shows for a week or so.

Members of the Group of Seven 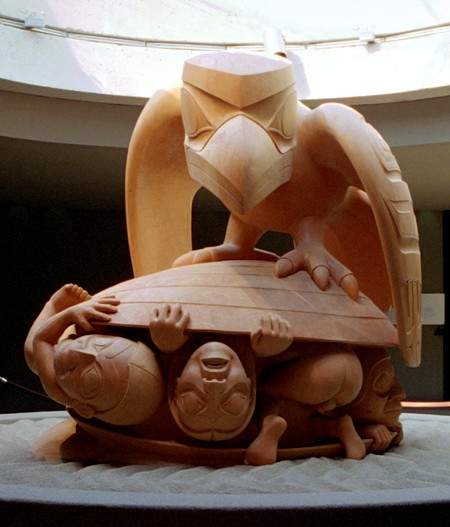 Canada's aboriginal peoples have developed a number of distinct artistic traditions over the centuries, often featuring bright colors and bold geometric shapes. Seen here, the sculpture Raven and First Man (1980) by Bill Reid (1920-1998), perhaps the most famous piece of indigenous artwork by Canada's most famous indigenous artist. Other acclaimed indigenous Canadian artists include Ellen Neel (1916-1966), Robert Davidson (b. 1946), Kenojuak Ashevak (1927-2013), and Jerry Whitehead (b. 1957), all of whom have created some of Canada's most memorable works of fine art across multiple mediums, including painting, sculpture, and printmaking.

In terms of sheer commercial success, Canada's most prominent impact on the literary world may be the paperback romance novel. In 1949 a Winnipeg man named Richard H.G. Bonnycastle (1903-1968) founded a publishing company called Harlequin Enterprises that rose to become the most prolific producer of romance novels on earth. Today, the Toronto-based company and its various subsidiaries publishes over 100 romance novels a month.

Members of the Group of Seven

Canada's aboriginal peoples have developed a number of distinct artistic traditions over the centuries, often featuring bright colors and bold geometric shapes. Seen here, the sculpture Raven and First Man (1980) by Bill Reid (1920-1998), perhaps the most famous piece of indigenous artwork by Canada's most famous indigenous artist. Other acclaimed indigenous Canadian artists include Ellen Neel (1916-1966), Robert Davidson (b. 1946), Kenojuak Ashevak (1927-2013), and Jerry Whitehead (b. 1957), all of whom have created some of Canada's most memorable works of fine art across multiple mediums, including painting, sculpture, and printmaking.

In terms of sheer commercial success, Canada's most prominent impact on the literary world may be the paperback romance novel. In 1949 a Winnipeg man named Richard H.G. Bonnycastle (1903-1968) founded a publishing company called Harlequin Enterprises that rose to become the most prolific producer of romance novels on earth. Today, the Toronto-based company and its various subsidiaries publishes over 100 romance novels a month.