A flag might be little more than a piece of coloured cloth hanging on a pole, but to those taught to respect it, it can wield enormous symbolic power. 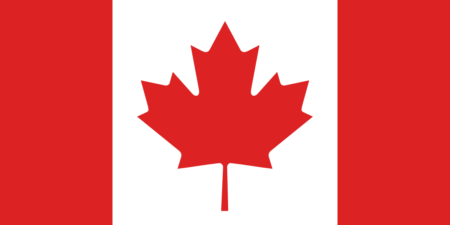 Canada is home to a wide variety of flags representing different aspects of the country’s geography, history and culture. They remain some of the most important emblems of the nation, easily recognized and much beloved.

Canada’s national flag is the red and white maple leaf flag, seen on the right. It is one of the most recognizable flags in the world, and perhaps the proudest symbol of the Canadian people. 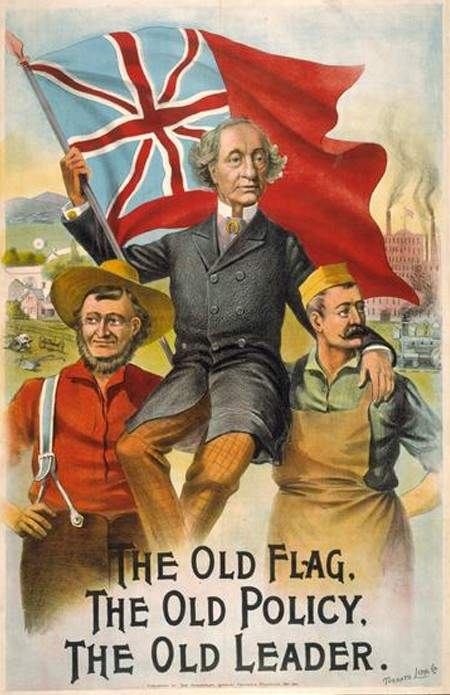 A 1891 re-election poster featuring Prime Minister John A. Macdonald (1815-1891) and what was even in those days known as "the old flag" of Canada.

History of the Canadian Flag

During the country’s early history as a British colony, Canada had no flag other than the Union Jack, the proud flag of the British Empire. But the British also needed a way to tell their colonies apart, so in the late 19th century it became popular to make what were known an ensigns for each colony; a red or blue flag with a little Union Jack in the top left corner and some sort of distinguishing crest or symbol in the bottom right. The Canadian one was called the Red Ensign, and featured a red field with the Union Jack and the Canadian coat of arms. After going through some variations, in 1921 a standard Red Ensign started being used as the Canadian national flag.

As Canada grew more politically independent from Britain during the 20th century, however, the Red Ensign became increasingly controversial. Prime Minister Lester Pearson (1897-1972, served 1963-1968), who had worked as an international diplomat, was particularly offended by it, and made one of the priorities of his administration the creation of a new flag free of British symbolism. The suggestion spawned one of the longest parliamentary debates in Canadian history. Older, conservative Canadians said the Red Ensign was the flag that Canadians fought and died under during two world wars, and one that reflected Canada’s historic ties to Britain and current ties to the monarchy. Though these people obviously lost the argument and the Maple Leaf flag was officially proclaimed on July 1, 1965 (today an informal holiday known as National Flag of Canada Day), it’s not too uncommon to meet older or very right-wing Canadians who are still bitter over losing the Ensign.

Interestingly, the Union Jack retains official status as a Canadian flag to this day, though it’s now quite rarely seen. This was Pearson’s compromise with traditionalists; according to law, the Union Jack — known in Canada as the Royal Union Flag — can still be flown once in a while as a “symbol of membership in the Commonwealth and allegiance to the Crown.” 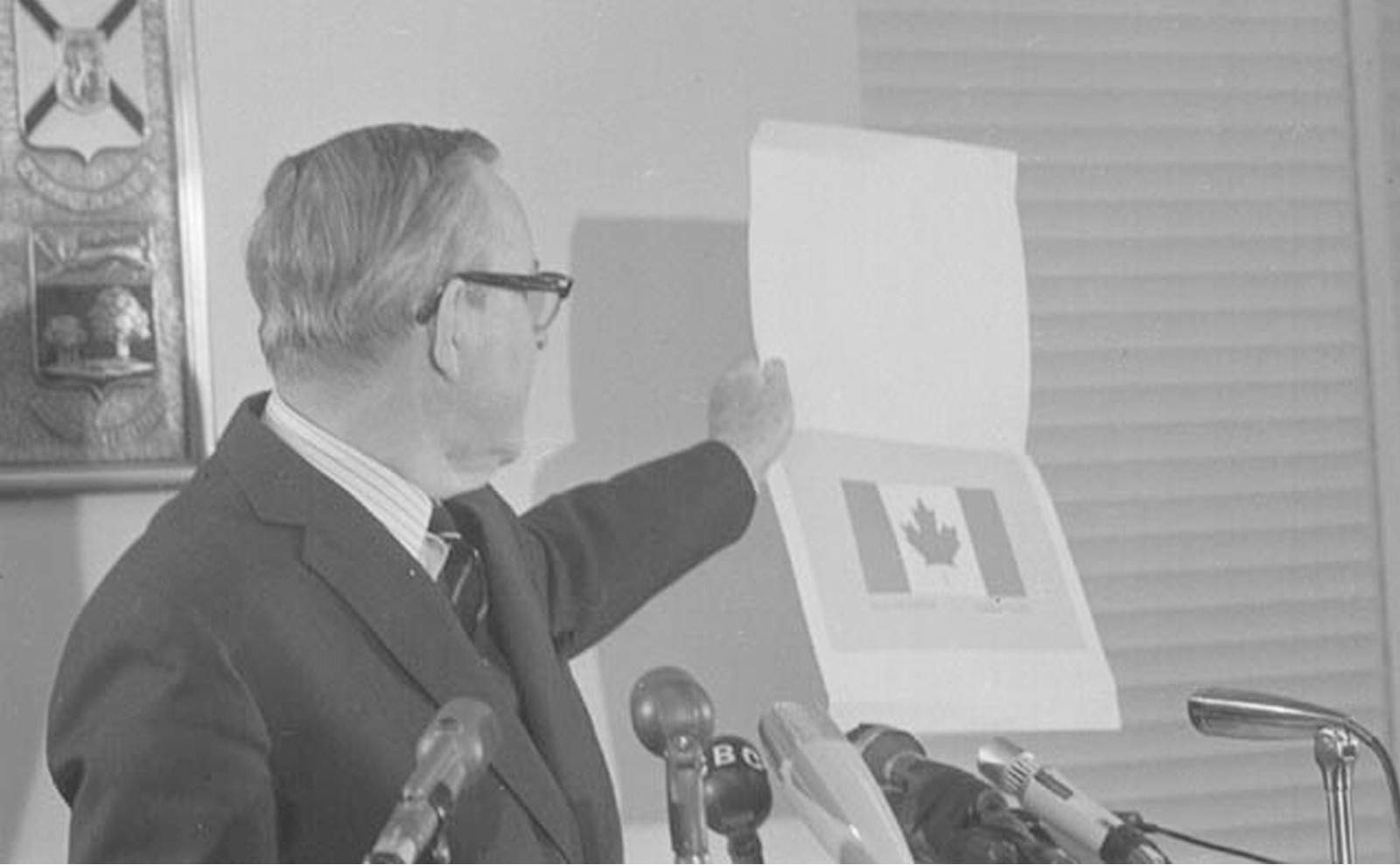 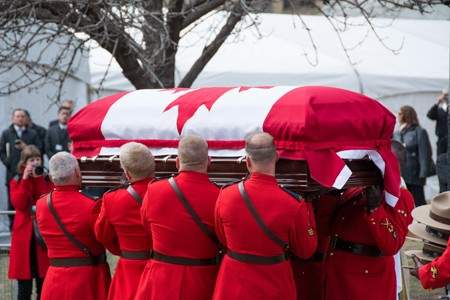 When someone dies who has dedicated their life to serving Canada, such as a soldier or politician, it's tradition for their casket to be draped with a Canadian flag. Seen here, the casket of former finance minister Jim Flaherty (1949-2014).

Since 1965, the national flag of Canada has been the Maple Leaf flag, which, as the name suggests, features a large red maple leaf on a white field, with two red bars on either side.

There is no official symbolism to the Maple Leaf flag, beyond the fact that the maple leaf is one of Canada’s best-known national emblems and red and white are Canada’s official colours. The specifics of the design don’t represent or mean anything in particular, and the flag is simply supposed to serve as a unifying symbol of the country.

Most government buildings, schools, and large businesses will fly a Canadian flag on a flagpole outside their entrance, and some Canadian families may hang a smaller flag from a pole near their front door. When someone important to Canada dies, or the country (or the world) experiences a high-profile tragedy, it’s standard etiquette to fly the flag at half-mast, or lower it halfway down the pole.

Each province and territory of Canada has its own flag, too. Like the Maple Leaf, most are fairly recent creations, often the result of contests or committees held during the 1960s and 1970s, when many provinces were getting ready to celebrate their centennial anniversaries. Prior to that, some provinces occasionally flew ensign-style flags with their provincial coats of arms in the corner, in the style of the national red ensign mentioned above.

Though diverse in design, the 13 provincial/territorial flags share a number of common traditions. Most are based on their province’s coat of arms in some form or another, and the majority feature some medley of preexisting, government-designated “official symbols.”.

The Alberta flag has a simple design featuring the provincial crest on a blue background. The crest itself features a stylized representation of the Alberta landscape topped by the Cross of St. George, a symbol of England.

British Columbia’s flag was created in 1960 during the activist reign of premier WAC Bennett (1900-1979). Based on the B.C. coat of arms, it’s supposed to represent an old saying about how “the sun never sets on the British Empire." It depicts a never-setting sun against the waves of the Pacific coast — at one time one of the Empire’s farthest-flung points.

Manitoba and Ontario are the only two provinces that never partook in the flag re-designing fad that swept the rest of Canada in the late 20th century. Both still use fairly generic-looking Red Ensigns as a result. The Manitoba flag features the province’s coat of arms, which has a buffalo — the official provincial animal — on it.

The Maritime provinces’ flags are all rich in British heraldic symbolism. The New Brunswick flag features a golden lion, representing England, and an old-timey sailing ship as a nod to the province’s historic status as a major centre of Maritime trade and ship-building.

The newest flag of any province, the flag of Newfoundland was drafted by a graphic design firm in 1980. It’s supposed to resemble a stylized Union Jack with the blue representing the sea and the white the frozen north. The other colours represent hope, pride, and forward-thinking.

Very similar to the Yukon flag, the Northwest Territories flag features the NWT crest between two blue bars, representing the territory’s rivers, lakes and oceans. The crest itself features a white fox, a traditional animal of northern Canada.

The flag of Nova Scotia is an inverted version of the Scottish flag, the Cross of St. Andrew, with the provincial coat of arms in the centre.

Nunavut is Canada’s newest territory and the Nunavut flag was created by a local artist in 1999. It features a red Inukshuk, a traditional stone formation made by the territory’s Native peoples. In the top right corner sits the North Star, another traditional symbol of northern Canada.

A vocal critic of the Maple Leaf, in 1965 Ontario Premier John Robarts (1917-1982) designated the Ontario Red Ensign as his province’s official flag to help ensure that the Union Jack would continue to fly in Ontario. Like Manitoba’s flag, it features the Ontario coat of arms in the bottom-right corner.

Prince Edward Island’s flag is a stretched-out version of the provincial coat of arms. The lion and the big tree represent mother England, while the three little trees represent the Island’s historic three counties.

Always a hotbed of nationalistic sentiment, in 1948 Quebec became the first province in Canada to create its own distinctive flag. Like the Maple Leaf flag, it doesn’t have any specific symbolism but uses the Fleur-de-lis and cross to evoke memories of the medieval banners of royal France.

Designed as part of a province-wide contest in 1969, the Saskatchewan flag displays a stylized depiction of the prairie province’s flat landscape, with the provincial crest in the top left corner and the provincial flower, the red lily, on the right.

Another contest-winner, the Yukon flag has the territorial coat of arms surrounded by a green bar, representing forests, and a blue bar representing rivers and lakes.

With national and provincial flags happily established, in more recent decades many of Canada’s cities and towns began to create flags of their own, too. These tend to vary in quality quite a bit, with the worst bearing obvious signs of being designed by some artistically illiterate municipal committee — which of course they often were. While some Canadian cities fly their municipal flag proudly, most are largely unknown to the general public and exist primarily for the sake of existing.

Canada is truly a country with a flag for every occasion. A good way to measure the importance of someone or something in Canada, in fact, is whether or not they have an official flag of their own.

Some notable examples include: 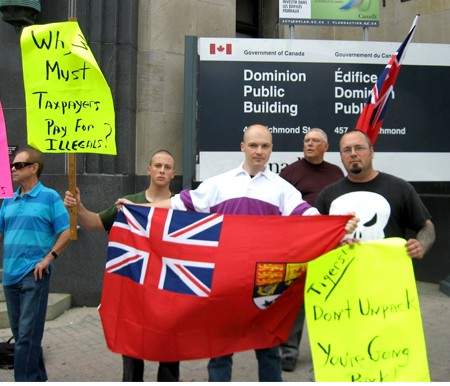 The Red Ensign still appears now and then, often in the context of far-right political causes. Seen here, a 2010 anti-refugee protest in London, Ontario. 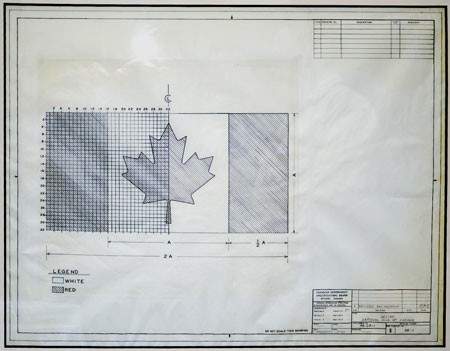 The official proclamation of the flag of Canada is fairly vague, so clarifying the specifics of the Canadian flag's design have been left up to the federal bureaucracy. The current rules are set out in Canadian General Standards Board standard CAN/CGSB-98.1-2011 (outdoor flags) and CAN/CGSB-98.2-2011 (indoor flags). Seen here, a diagram from the original 1966 standards. 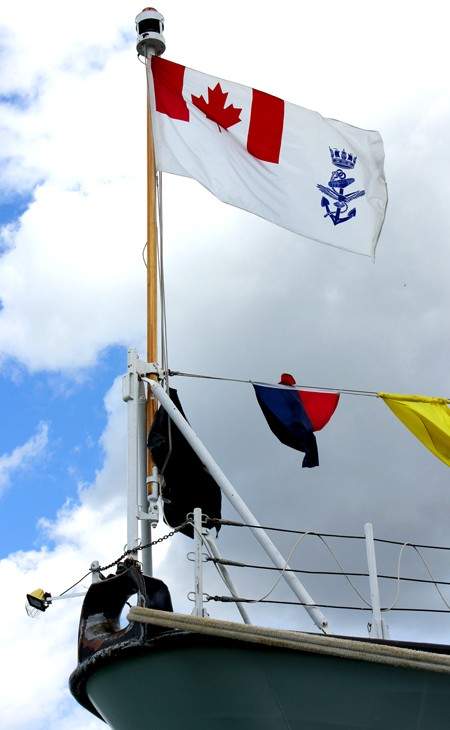 Most countries fly a different flag from ships, known as their naval ensign or naval jack. Canada's is based on the British one, with a small Canadian flag in the top right corner and the crest of the Royal Canadian Navy in the bottom left. The other branches of the Canadian military have similarly-designed flags.

The Red Ensign still appears now and then, often in the context of far-right political causes. Seen here, a 2010 anti-refugee protest in London, Ontario.

The official proclamation of the flag of Canada is fairly vague, so clarifying the specifics of the Canadian flag's design have been left up to the federal bureaucracy. The current rules are set out in Canadian General Standards Board standard CAN/CGSB-98.1-2011 (outdoor flags) and CAN/CGSB-98.2-2011 (indoor flags). Seen here, a diagram from the original 1966 standards.

Most countries fly a different flag from ships, known as their naval ensign or naval jack. Canada's is based on the British one, with a small Canadian flag in the top right corner and the crest of the Royal Canadian Navy in the bottom left. The other branches of the Canadian military have similarly-designed flags.