Every country has a set of patriotic icons that citizens use to celebrate the uniqueness of their homeland, and Canada is no exception. Canada’s national emblems run the gamut from historic and dignified to modern and corny, but rare is the Canadian who doesn’t feel at least a little twinge of pride towards them. 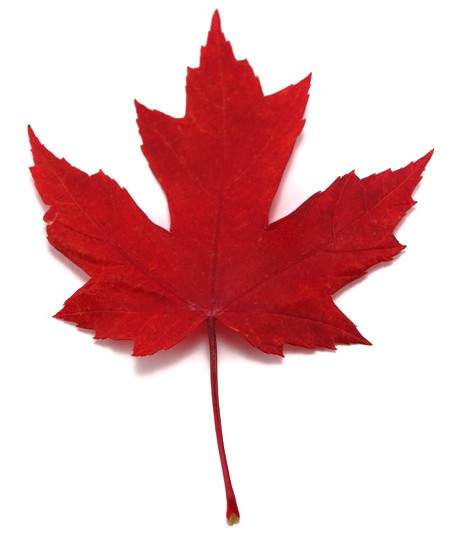 Though there are over 10 different types of maple trees in Canada, each with slightly differently-shaped leaves, the most famous species is the sugar maple (Acer saccharum), whose leaf is on the Canadian flag. Though sugar maple leaves are normally green, they turn bright red in the autumn.

The distinctively-shaped maple leaf is the most common catch-all symbol for Canada, appearing not only on the Canadian national flag (see below), but virtually every logo of a Canadian corporation or charity, or any other organization that needs to make its “Canadianness” instantly known.

The maple leaf is a symbol that’s been so famous for so long that no one seems to remember exactly where it came from or how it got to be so popular. Various species of maple trees (of the plant family Aceraceae) can be found in most regions of Canada, and their multipurpose functionality as both a provider of lumber and edible, sweet syrup has proved useful to many generations of Canadians over the centuries. In one sense, the maple can be viewed as a tree that rewards labour and perseverance, and evokes the history of early Canadians able to “tame” the wilderness for their own benefit. But to many others, it’s simply a pretty tree with a pretty leaf that has become associated with Canada — and that’s good enough. 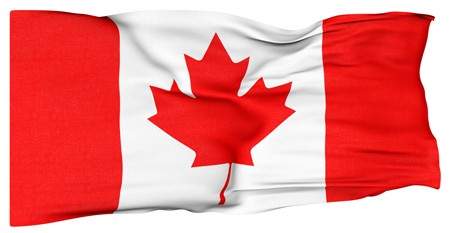 When it’s not flying from a pole, the Canadian flag can be seen on t-shirts, baseball caps, bumper stickers, pencil cases, ice cream cakes, tattoos, and virtually anything else you can imagine. As you might expect, there aren’t a lot of taboos in Canada about inappropriate places to put the flag.

Like every other country on earth, Canada has a national flag suitable for flying, hanging or waving in any circumstance where a bit of patriotic pride is needed. Adopted in 1965, the official flag of Canada is known as the Maple Leaf, and consists of a stylized red leaf on a white background bordered by two red bars on either side. Unusually for a national flag, no part of the design is supposed to represent anything in particular; the stylized leaf was simply created as a neutral symbol of Canadian unity, and there is no official explanation of what the colours or bars are supposed to mean.

Every province in Canada has its own flag as well, as do many cities. The history and evolution of Canadian flags is a fairly large and interesting topic in its own right, so for more information, please check out the Canadian flags chapter. 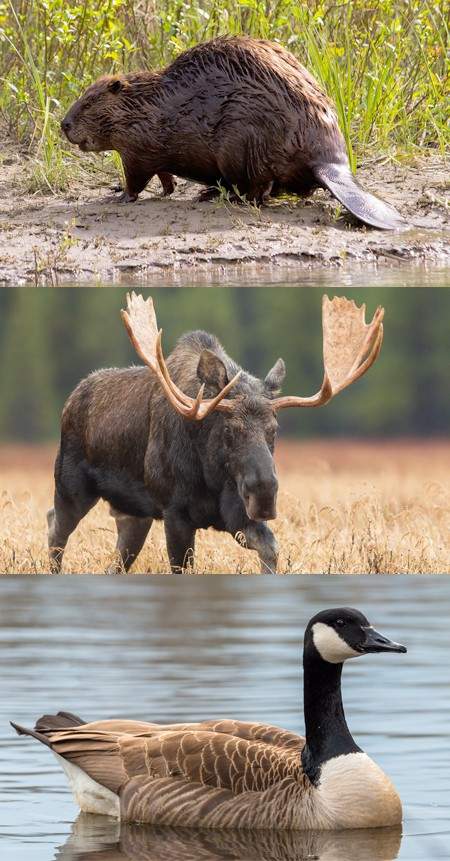 A beaver, a moose, and a Canada goose, all in their natural Canadian habitats.

The wilderness itself may be Canada’s most iconic symbol. As an enormous country with more untouched nature than any other, it’s unsurprising a vast assortment of things associated with the great outdoors feature so prominently in the Canadian gallery of national symbols. As the original residents of nature, Canada’s diverse array of wild animals are among its most famous representatives.

The beaver (Castor canadensis) is the most famous Canadian animal. It appears on the Canadian nickel and is often used by cartoonists to personify the country as a whole, much like “Uncle Sam” or a Chinese dragon. Though today beavers are often celebrated for their plucky, hardworking character, chomping down trees to build elaborate live-in dams, the original Canadian attraction to beavers was much less respectful: they had good fur for making hats. Prized for its smooth, waterproof texture, beaver fur was one of Canada’s main exports to Europe during the 17th and 18th centuries. So much so, in fact, that the animal was almost hunted to extinction by early Canadian fur traders. Saved by changing tastes in fashion, today they can be found lurking in riverbeds all across the country.

Less rich in specific symbolism are some of the beaver’s furry pals, such as the moose, the polar bear, the black bear, the mountain lion, the mountain goat, the elk, the Arctic wolf, the raccoon, the lynx and the bison, all of which are common sights not only in the Canadian wilderness, but also Canadian airport gift shops. And then there are the birds, including the loon (Gavia immer) — the national bird of Canada and namesake of the loonie — and the not-quite-so beloved Canada goose (Branta canadensis), an elegant-looking animal that is nevertheless quite ornery and unpleasant in its interactions with humans. Every province has its own official bird as well, the most famous of which are probably the snowy owl of Quebec and the puffin of Prince Edward Island. 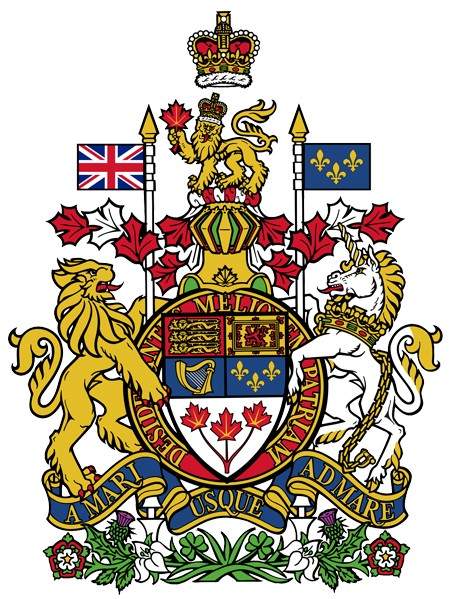 The Coat of Arms of Canada was officially adopted in 1921, and in its initial form it was virtually identical to Britain's Royal Coat of Arms. In 1994 it was modified slightly to include Canada's second motto ("Desiderantes Meliorem Patriam," see below) as well as some red and white maple leafs at the top.

The Canadian Coat of Arms

Like most countries of European heritage, Canada has a grandiose heraldic symbol known as the Coat of Arms (also known as the national crest) that appears on things like passports, government publications and wax seals. It’s a very complicated and detailed illustration that is almost entirely identical to Britain’s Royal Coat of Arms, which dates back to the 17th century.

The crest’s symbolism is largely British: it depicts an English lion and a Scottish unicorn holding a shield displaying medieval icons of the English, Scottish, and Irish peoples of the British Isles, plus the fleur-de-lis of the French and the maple leaves of Canada. At the creatures’ feet sit a medley of plants representing the Scottish, Irish, English, and Welsh. The animals stand below the flags of the United Kingdom and medieval France, symbolizing the “two founding nations” of modern Canada.

Canada has two national mottoes, both of which are inscribed in Latin on the crest. The first (on the red belt around the shield) is Desiderantes Meliorem Patriam, or “They Desire a Better Country,” which acknowledges the immigrants who have built Canada and Canadians’ ongoing desire for national self-improvement. The other (on the blue ribbon at the bottom) is A Mari usque ad Mare, or “From Sea to Sea,” which celebrates the country’s vast geography.

"Canada must be the only country in the world where a policeman is used as a national symbol."

Officers of the Royal Canadian Mounted Police (RCMP), nicknamed Mounties, have been one of Canada’s most iconic symbols for generations.

The RCMP was founded in 1873, originally known as the North-West Mounted Police, and were initially used to bring law and order to Canada’s newly-aquired Prairie provinces and northern territories. Their adventures in the untamed Canadian wilderness, full of wild animals, crazy cowboys, greedy prospectors, and (as they saw it) dangerous Indians became the subject of many Hollywood movies in the early 20th century, and helped make Canada’s cops an internally-known symbol of Canadian life.

Today, RCMP officers rarely wear their iconic red uniforms and wide-brimmed hats except on ceremonial occasions, but full-dressed officers are a common sight on Canadian souvenirs, postcards, and toys. 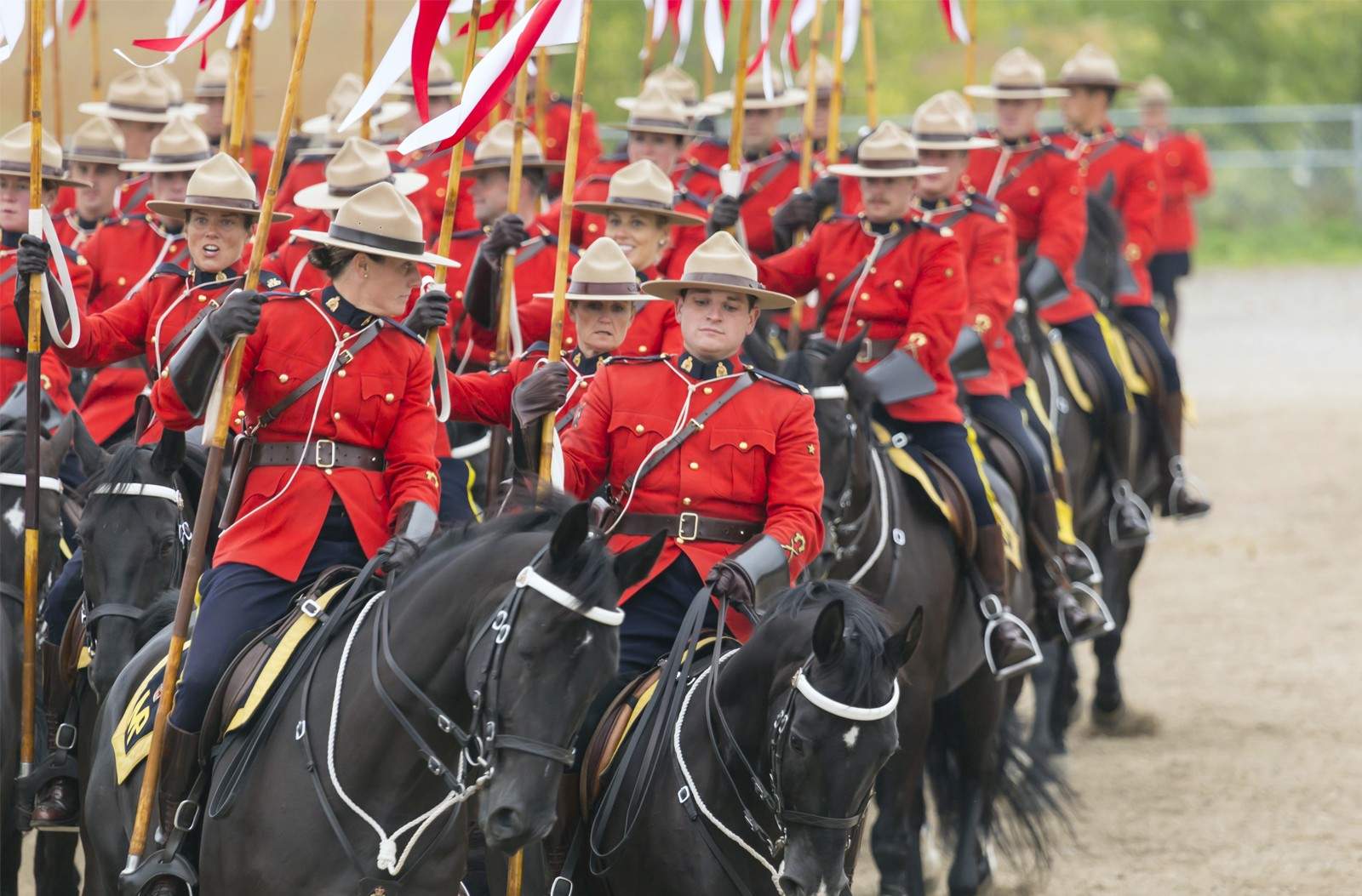 There have been a lot of patriotic songs written about Canada over the years, but until 1980 none held the lofty status of Canada’s official national anthem. Initially, the country was just supposed to use God Save the Queen, the royal anthem of Great Britain, for official purposes, but as the years went on there was growing interest in using a more uniquely Canadian song, with The Maple Leaf Forever (1867) and O Canada (1880) emerging as the two most popular tunes. O Canada eventually won out, and was given official anthem status when Parliament passed the National Anthem Act in 1980.

Like most national anthems, the Canadian anthem has several other verses as well, but these are never sung at public occasions since no one knows the words. Note as well that prior to 2016, when the Act to Amend the National Anthem Act was passed, the line “in all of us command” was “in all thy sons command.” It was changed to make the anthem “gender neutral.”

O Canada was actually originally written in French, and there are unique French lyrics as well. Depending on how politically-correct the setting, singers may be expected to lapse into French for a few verses at some point. The French lyrics are as follows: 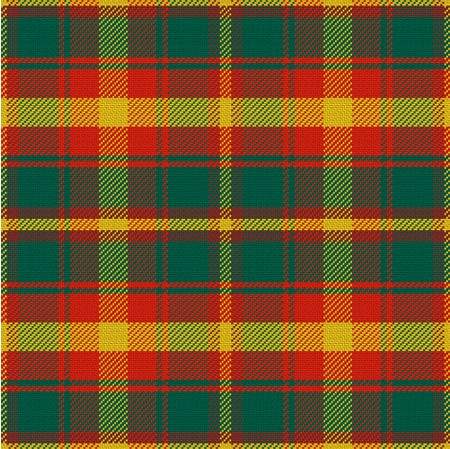 In 1964, the government of Canada commissioned an official tartan, or plaid pattern, to be used in the kilts of the dress uniforms of certain regiments of the Canadian Army. In 2011 the pattern, known as the Maple Leaf Tartan, was declared an official symbol of Canada by parliament. 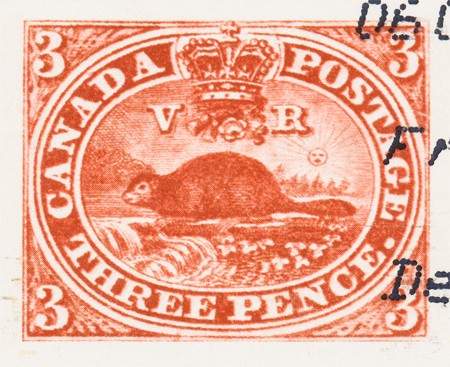 In 1851, Canada released the first stamp in history to not depict a king, queen, or emperor with this three pence beaver stamp, now known to collectors as the "Threepenny Beaver."

In 1964, the government of Canada commissioned an official tartan, or plaid pattern, to be used in the kilts of the dress uniforms of certain regiments of the Canadian Army. In 2011 the pattern, known as the Maple Leaf Tartan, was declared an official symbol of Canada by parliament.

In 1851, Canada released the first stamp in history to not depict a king, queen, or emperor with this three pence beaver stamp, now known to collectors as the "Threepenny Beaver."