The side of government that is run by hired employees rather than elected politicians is known as the Canadian public service, civil service, or federal bureaucracy, and consists of a vast assortment of departments, agencies, commissions, committees, councils, and corporations. More Canadians work for the federal government than any other employer in the country. At last count, the total number was somewhere in the 250,000 range. 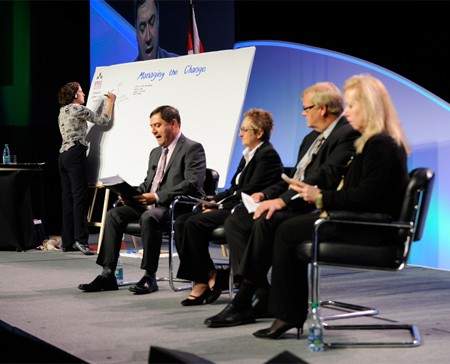 A panel of deputy ministers at the 2013 Government Technology Exhibition and Conference in Ottawa.

At the top of Canada’s bureaucratic pyramid are the cabinet departments, sometimes called “ministries” since they’re run by cabinet ministers chosen by the prime minister. Each cabinet department specializes in a unique area of federal responsibility, such as finance, foreign policy, criminal law or international trade. There are presently around 30 cabinet-departments in the country, though the number tends to ebb and flow a lot, as under Canadian law it’s very easy to make new departments or reorganize the ones that already exist.

As mentioned in the House of Commons chapter, cabinet ministers are all sitting Members of Parliament whom the prime minister has chosen to help him run the country. In theory, they’re the politicians most qualified for the job, but in reality the sort of people the prime minister actually chooses is usually determined more on the basis of who he personally trusts, or who will give his cabinet the right amount of gender, racial or geographic balance. Going in, a lot of cabinet ministers will not know much about the department they’ve been placed in charge of, and as a result, the more active, day-to-day head of a cabinet department winds up being not the minister herself, but rather the deputy minister.

Deputy ministers hold office independently of the ministers, and are professional bureaucrats selected for their knowledge and experience. Many will serve under multiple cabinet ministers of both political parties and are expected to be strictly non-partisan and politically neutral as a result. In theory, it’s the deputy minister’s job to get the rest of the bureaucrats below him to carry out the “vision” of the minister and ruling party, which he learns by having lots of long consultations with his minister. When the minister and the deputy get along, there’s nothing they can’t do! But of course, in practice, there’s often a lot of tension between what the political minister wants and what the bureaucracy thinks is possible or wise. Though this can generate a lot of back-and-forth, it’s also seen as one of the key checks and balances to tame and control the powers of the Canadian government.

Since they can’t do everything on their own, most cabinet departments delegate authority to an array of smaller, specialized boards, offices and agencies that operate semi-independently under their larger umbrella of jurisdiction. In most cases, these subsidiaries deal exclusively with one particular sub-field of the cabinet department’s realm of responsibility in which the demand for public services is especially high.

In most cases, these specialized sub-entities operate out of their own headquarters and have their own unique bureaucratic structures, which ministers and deputy ministers have only limited control over. This so-called “arm’s-length relationship” is said to keep the most important sorts of government services and advice independent from excessive political control and meddling. 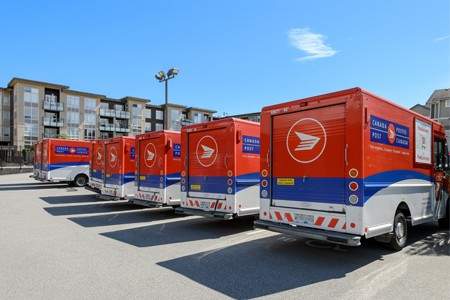 Canada Post, the Canadian mail service, employs over 60,000 Canadians, making it the country's largest Crown Corporation. Its future also tends to be the most widely debated, given many other countries have privatized their postal delivery. Seen here, Canada Post mail trucks in Vancouver.

Crown corporations are formed when the Government of Canada decides to run a business. They are, as the title suggests, government-owned corporations that are run independently from the rest of the federal bureaucracy, but are still ultimately accountable to the government. The most notable Crown corporations include the Canadian Broadcasting Corporation (CBC), which runs a bunch of television and radio stations, Canada Post, which delivers the mail, and VIA Rail Canada, a national train service. Less high-profile, but in charge of significantly more money are the Crown corporations in charge of making financial loans to individuals and businesses, including the Canada Mortgage and Housing Corporation and the Business Development Bank. The prime minister gets to appoint the top executives of Crown corporations, usually the CEO and board of directors, who hold office for fixed terms in order to ensure their political independence.

The principle behind Crown corporations is that they provide certain essential services to the public that would probably never be offered by the profit-hungry private sector. For example, it’s hard to imagine a private corporation that would be willing to deliver a single letter to a poor town of 300 people located in the darkest regions of Canada’s upper Arctic, but this is what Canada Post does every day. At the provincial level, Crown corporations are commonly used to provide utilities such as electricity, natural gas, public transportation, and most famously, health insurance and hospitals. In most cases, the public has to pay to use these services, but the fees and premiums they pay are recycled back into the coffers of the Crown corporations, which gives them a base of funding independent from the rest of the government budget.

In recent years, and especially since the rise in post-1980s-style conservatism, it’s become common to debate the usefulness of many Crown corporations, and whether or not they should be sold or privatized and turned into for-profit businesses run independently of the government. Several large Crown corporations have already been successfully privatized in this manner, most notably the Air Canada airline and the Petro Canada oil and gas company. Rarely uncontroversial, the decision to privatize ultimately comes down to a debate over what should be a “public service” versus what the private sector could do better and cheaper.

The Privy Council still holds a lot of power under the Canadian constitution, but these powers are now exercised by the cabinet, and often, just the prime minister himself. A rule or law decreed by the prime minister or cabinet is called an "order-in-council" or a decree of the "governor-in-council" — old-fashioned terms that refer back to the days in which the full Privy Council and colonial Governor were the ones making decisions.

The Privy Council and the Prime Minister’s Office

One of the oldest political institutions in Canada, the King’s Privy Council of Canada was originally a group of wise men recruited by the colonial governor to help him run the government. During the 19th century, as more democratic, parliamentary institutions were gradually introduced, the council fractured into two parts. In order to give his government greater democratic legitimacy, the governor began appointing more and more elected politicians to the Privy Council, and this faction eventually became the cabinet we know today (with the prime minister eventually replacing the governor as chairman). Everyone else who got into the Privy Council — rich landowners, the prime minister’s friends, dukes, lords, etc. — were reduced to symbolic members. Today, the official Canadian Privy Council is an incredibly large body of men and women consisting of about 30 cabinet ministers and around 400 symbolic members, with most of the latter being former cabinet ministers who were made Council members-for-life by past prime ministers. The full Privy Council meets almost never and does almost nothing.

The staff of the Privy Council remains important and powerful, however, and the modern Privy Council Office (PCO) has evolved into the highest-ranking bureaucratic department in Canada. Employing over 500 people, it’s the agency charged with advising and supporting the prime minister of Canada, and coordinating the actions of all other bureaucratic departments under his agenda and leadership. The head of the PCO is known as the Clerk of the Privy Council and Secretary to the Cabinet, and serves as one of the PM’s closest and most trusted advisers.

Like the deputy ministers (see above), the PCO clerk and his staff are supposed to be non-partisan, and their advice and recommendations are supposed to be largely technocratic — or professional — in nature. Since prime ministers don’t always want this kind of advice, however, a parallel organization known as the Prime Minister’s Office (PMO) has steadily grown as an alternative. Unlike the PCO, the employees of the PMO, headed by the prime minister’s Chief of Staff, advises and coordinates the cabinet and their underlings mostly on the basis of political strategy, ideology, and public image. A great topic of discussion among Ottawa-watchers is whether or not the PMO has basically eclipsed the PCO in terms of relevance and power, and whether the PM’s political advisors have more power than his bureaucratic ones. 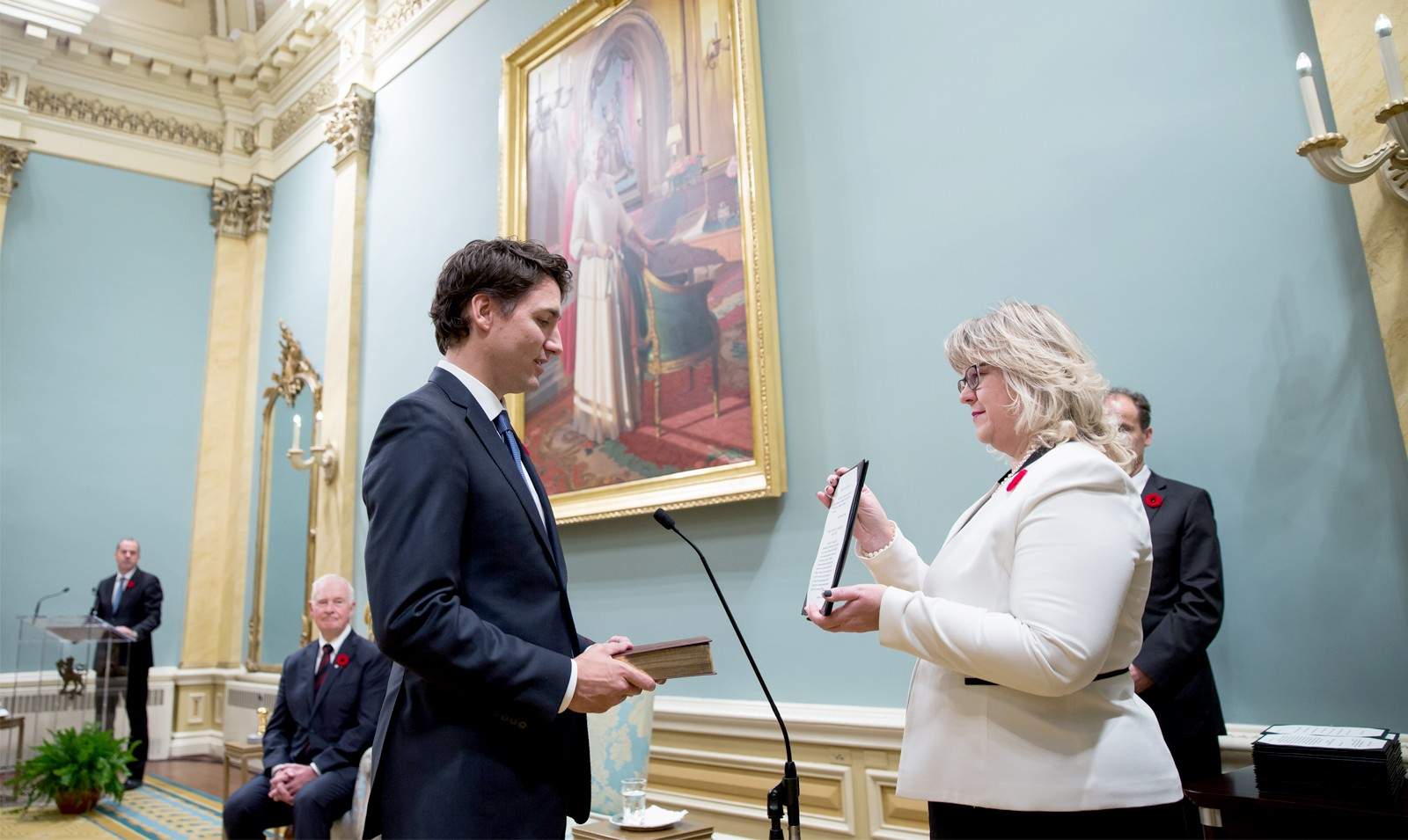 Some of the most powerful figures in the Canadian bureaucracy are the so-called Officers (or "agents") of Parliament, who are appointed by Parliament to run several agencies charged with upholding the credibility of the federal government. These include the Auditor General of Canada, the Chief Electoral Officer of Canada, the Privacy Commissioner, and the Commissioner of Lobbying. Seen here, Auditor General Michael Ferguson at a 2016 press conference in Ottawa. 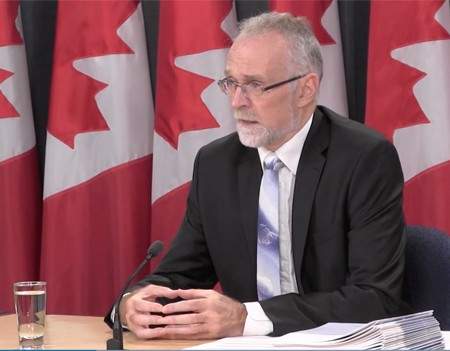 How Canadian Bureaucrats are Appointed

In the old days, there were very few rules governing the way jobs in the Canadian federal bureaucracy were distributed. Politicians would basically just dole out positions to their friends, and the civil service was stuffed with partisans, donors and lobbyists as a result.

Controversy over this resulted in the creation of the Public Service Commission Board, which now does most of the appointing. Nominated by the prime minister and approved by Parliament — a two-step process that is quite rare in Canadian government — the PSC Board appoints most of the country’s deputy ministers and most other senior bureaucrats in charge of non-cabinet level government departments and agencies. By law, the PSC is supposed to appoint people “on the basis of merit” and their picks “must be free from political influence.” Folks appointed by the PSC are likewise supposed to refrain from overt political activity once in office, lest their appearance of partisan neutrality be compromised.

Despite this, there remain many important government jobs that continue to be appointed for overtly political reasons. The best jobs in the Canadian bureaucracy, which is to say, the presidents, directors, chairmen, board members and other boss-types, remain largely hand-picked by the government of the day to further their political agendas, while it’s generally the people below them who are members of the non-partisan “professional” class. Most politicians would argue it is important for them to be able to exert some degree of control over the people charged with carrying out their vision, though the question of how much is too much remains a topic of much debate. 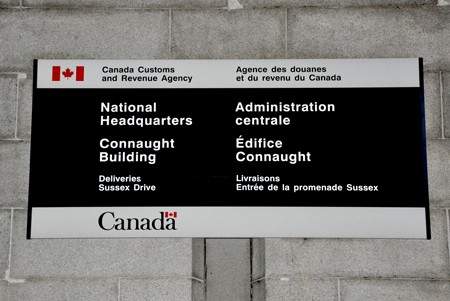 Government offices are located all over Canada, housed in all sorts of different buildings. They are always identifiable by their distinctive black-and-grey bilingual signs, however. 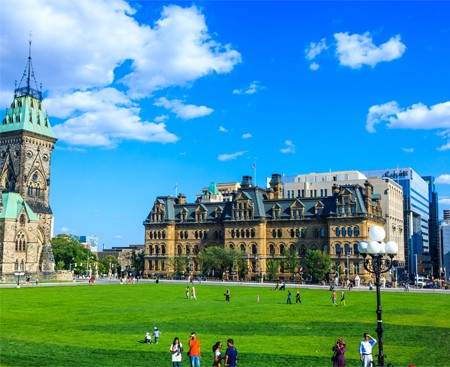 Located just to the right of the Parliament buildings in Ottawa, the blue-and-gold Langevin Block building, seen here, is the base of the Privy Council Office, and thus the headquarters of the Canadian public service. It was named after Hector-Louis Langevin (1826-1906), an early Canadian cabinet minister, which became increasingly controversial, given Langevin's views on aboriginal Canadians. In 2017 the building was officially renamed the Office of the Prime Minister and Privy Council.

Government offices are located all over Canada, housed in all sorts of different buildings. They are always identifiable by their distinctive black-and-grey bilingual signs, however.

Located just to the right of the Parliament buildings in Ottawa, the blue-and-gold Langevin Block building, seen here, is the base of the Privy Council Office, and thus the headquarters of the Canadian public service. It was named after Hector-Louis Langevin (1826-1906), an early Canadian cabinet minister, which became increasingly controversial, given Langevin's views on aboriginal Canadians. In 2017 the building was officially renamed the Office of the Prime Minister and Privy Council.