Canada’s only west coast province, British Columbia, occupies the country’s entire border with the Pacific Ocean, stretching from the Alaskan panhandle in the north to the American state of Washington in the south.

Thanks to its unique location, B.C. (as most call it) is the most temperate part of a country otherwise known for cold weather, and houses many of the iconic symbols of natural beauty — giant evergreens, sky-high waterfalls, jagged, snow-capped peaks — that have long formed the popular postcard image of “Canada” around the world.

The third-largest province in terms of population, British Columbia is located over three thousand miles from Canada’s major cities of Toronto, Montreal and Ottawa, and has evolved a somewhat distinct culture as a result. The large coastal city of Vancouver and its surrounding suburbs are British Columbia’s dominant population centres, while the interior and north remain far more rural. 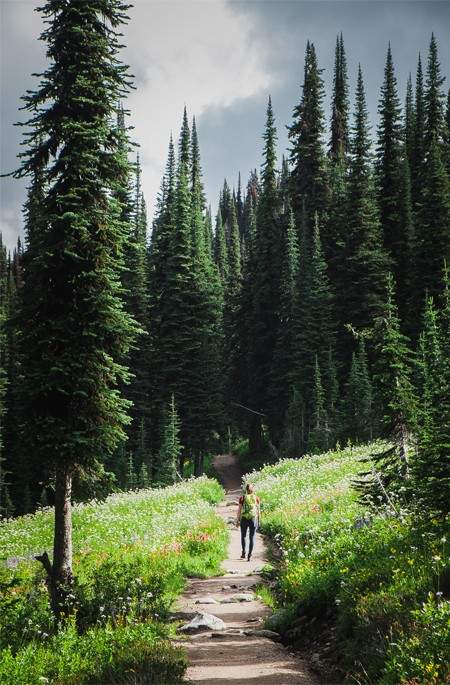 Walking amid flowers and evergreen trees on the Selkirk Mountains in Revelstoke, British Columbia.

B.C.’s geography is so unlike the rest of Canada it’s classified in a distinct category all its own. The province occupies what is known as the country’s Cordillera region, a vast, thickly forested area of enormous mountain ranges, deep valleys and long rivers. A largely rainy climate has helped contribute to a diverse mix of vegetation, most notably a wide array of evergreen trees which once formed the backbone of the province’s historically lumber-based economy.

The coast of British Columbia is a jagged mess of fjords, rocky coves and sandy beaches, with numerous islands crumbling off the edges. The largest of these is the massive Vancouver Island in the south, home to the provincial capital of Victoria, followed by the more remote, but still populated, Haida Gwaii archipelago to the north (previously known as the Queen Charolette Islands). Between the Coast Mountains on the west coast and the Columbia and Rocky Mountains in the east (which form the province’s border with Alberta), much of B.C.’s interior plateau is comprised of flatter terrain used for farming.

Mainland British Columbians usually speak of their province in terms of two broad regions: the Lower Mainland, containing the southwestern Vancouver peninsula and its surrounding suburbs, and the Interior, which is everywhere else. Northern British Columbia is usually considered a distinct area as well, and like most parts of northern Canada tends to be the most sparsely populated. The vast majority of citizens dwell in the Lower Mainland. 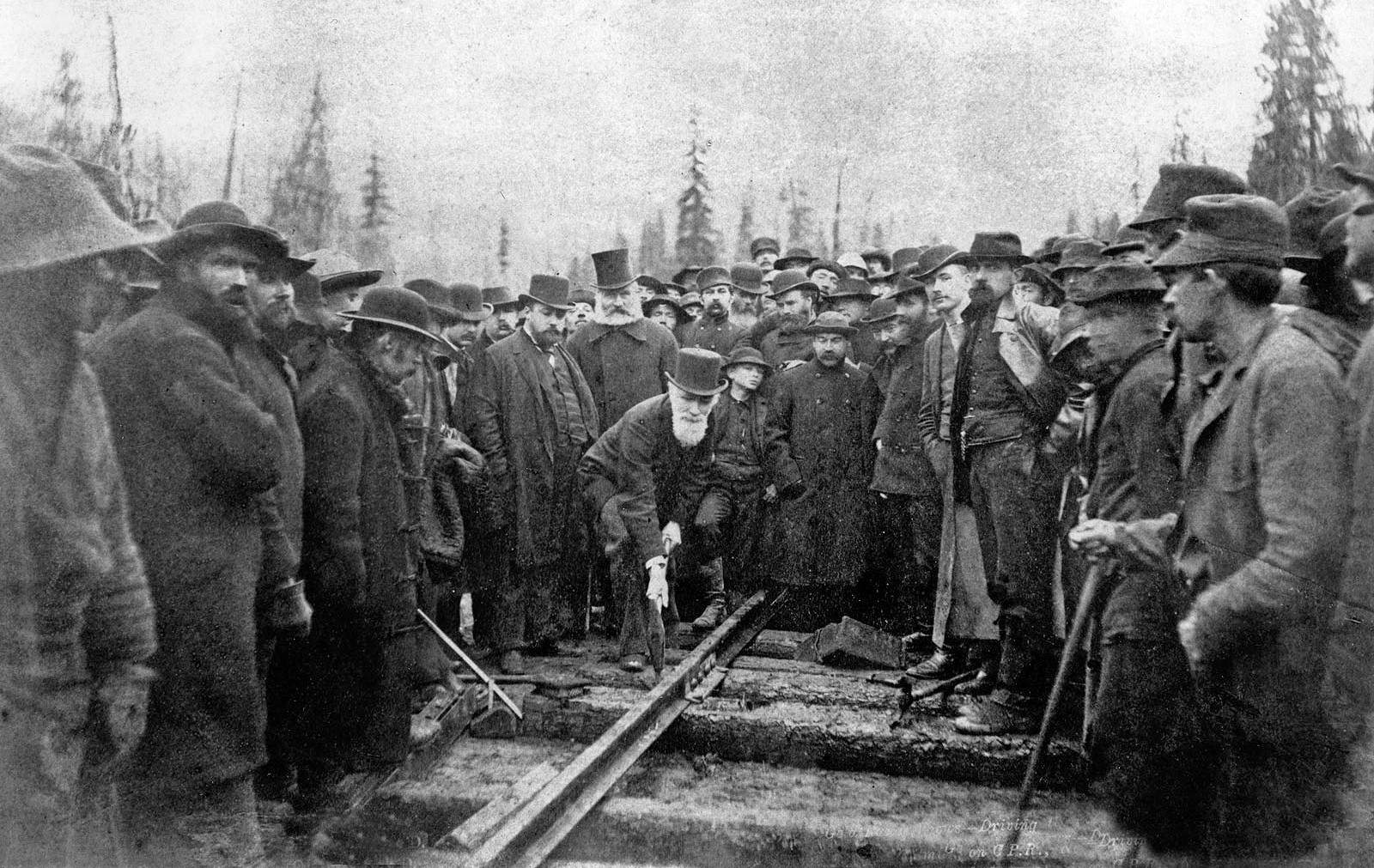 The "last spike" of the Canadian Pacific Railroad, hammered on November 7, 1885, in Craigellachie, British Columbia. 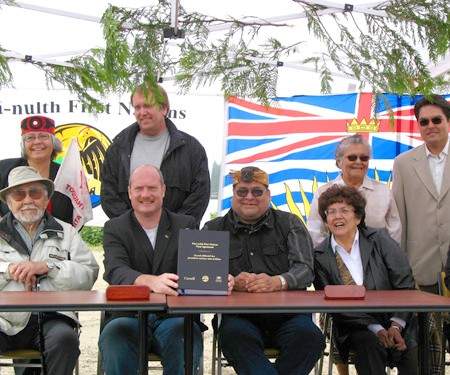 Unlike other provinces, British Columbia's white settlers never signed treaties with Canada's aboriginal peoples, and simply displaced them without compensation. Only in recent years has the treaty-making process began, with the B.C. government signing agreements with the Nisga'a (2000), Tsawwassen (2009), and Maa-nulth (2011) nations. Seen here, the 2011 signing ceremony between B.C.'s minister of aboriginal relations and Maa-nulth chiefs.

What we now know as “British Columbia” was originally two distinct colonies; the British colony of Vancouver Island, which was discovered by English and Spanish navigators in the late 18th century, and the mainland territory of New Caledonia, which was colonized around the same time by fur traders who had either migrated west from Britain’s eastern Canadian colonies, or north from the United States. An enormously difficult place to visit before the advent of airplanes or railroads, for decades the two colonies housed only a very small number of white settlers, and much of the population remained indigenous. An 1858 gold rush flooded the land with newcomers, however, and many stayed to become full-time miners or loggers.

After a brief period of joint U.S.-British rule, during which the region was known as the Oregon Territory, in 1866 the Island and mainland were merged into a single political unit called British Columbia. After Ontario, Quebec, Nova Scotia and New Brunswick merged to form the Dominion of Canada in 1867, both British and Canadian elites quickly put pressure on B.C. to join as well. British Columbia agreed to become Canada’s sixth province in 1871, with the promise of a trans-Canadian railroad to unite east with west helping seal the deal.

The 19th and 20th centuries saw advancements in industry and transportation that allowed British Columbia to become one of North America’s natural resource hubs, trading lumber, minerals and fish across the continent. A booming economy spawned dozens of new cities and drew thousands of immigrants from all over the world, including many from Asia, which is relatively nearby. In modern times, B.C. has mostly abandoned its resource-based economy in favour of service industries like retail, tourism and software design, though 25 per cent of the provincial GDP is still drawn from logging or mining. 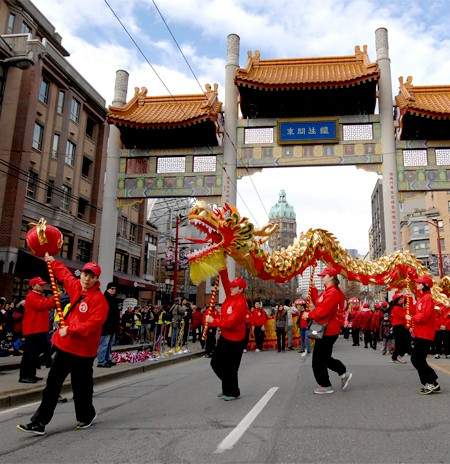 New Year's revelers at the gate to Vancouver's historic Chinatown, at one time the largest concentration of Chinese people in Canada. These days Chinese-Canadians are dispersed all over the city and its surrounding suburbs. B.C.'s fourth-largest city, Richmond now has a majority Chinese-Canadian population.

Most British Columbians claim to come from Vancouver, but the city itself is not terribly large. Housing less than 600,000 people, it’s only the country’s eighth-largest city, behind less renowned places like Winnipeg and Mississauga. It’s only when you include the population of Vancouver’s surrounding cities, like Surrey, Burnaby and Richmond that the population of “Greater Vancouver” climbs to over a million.

A scenic, oceanfront city, Vancouver is the epicenter of Canadian trade with Pacific nations, as well as a popular destination for Asian shoppers, American cruise ships, Australian skiers, and other eclectic types of tourist. Proximity to Asia has also contributed to the city’s racial diversity, and Vancouver’s Chinese, Korean and Indian populations have visibly skyrocketed in recent years, giving the city a unique multicultural character that can be seen in Vancouver’s rich food scene and numerous ethnic festivals. Like Toronto, Vancouver’s visible minority population is now over 40 per cent, and in some neighbourhoods the English language may be rarely seen or heard.

Banking, real estate and software design have come to play a large role in the Vancouver economy, allowing the city to aggressively market itself as a hip haven for international investment. Waterfront / mountain views do not come cheap, however, and the city is easily the most expensive place to live in Canada. Some studies claim it’s one of the most expensive places to live in the whole world, in fact. 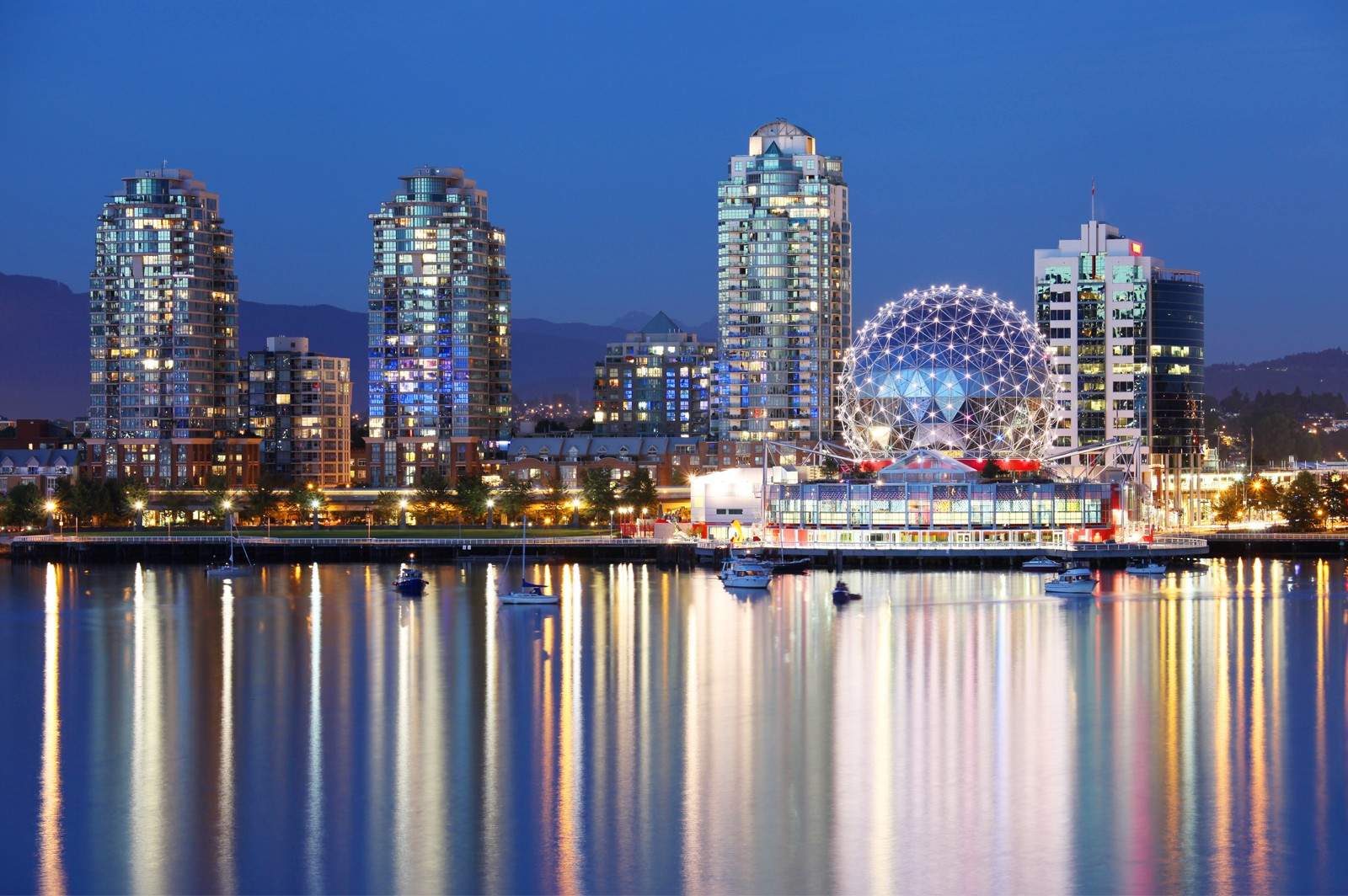 The orb-like Telus World of Science dates to Vancouver's hosting of the 1986 World Epxo.
Dan Breckwoldt/Shutterstock 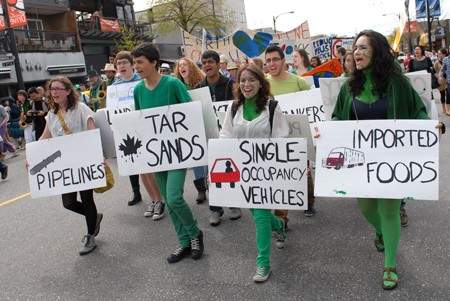 Sitting so far from Canada’s major population centres of Ontario and Quebec, British Columbians can feel alienated from the goings-on in other parts of the country, which has led to a somewhat obsessive culture of contrasting “East vs. West.” The standard stereotype is that British Columbians tend to be more laid-back and easy-going than Eastern Canadians, but also less ambitious and successful. Neither trope is without some basis in reality; historically, “moving west” has been a popular journey for easterners eager to escape the rat race of Toronto or Montreal, while the opposite trek has been equally popular with British Columbians seeking big jobs and big money.

Home to so much picturesque nature, British Columbians have a tradition of environmentalism that often manifests in the form of so-called “green” politics and fads, such as organic gardening or “off the grid” living. The province’s controversial embrace of marijuana is sometimes said to be an outgrowth of this, and the popularity of homegrown “B.C. Bud” and household grow-ops, or indoor hydroponic gardens, have formed cultural clichés that have proven hard to shake.

Across the country, B.C. politics have something of a reputation for being wacky or erratic, a stereotype that probably comes from the larger stereotype of British Columbians as goofy bohemian hipsters. Historically, the province’s politics have been dominated by a sort of exaggerated, stylized class conflict between aggressively left-wing labour unions, particularly the public sector teacher, nurses and government employees unions (who back the provincial New Democratic Party), and a more libertarian-minded business community (who originally backed the long-lived B.C. Social Credit Party, and now support the B.C. Liberals). British Columbia is the only part of Canada where the Green Party has enjoyed much political success. 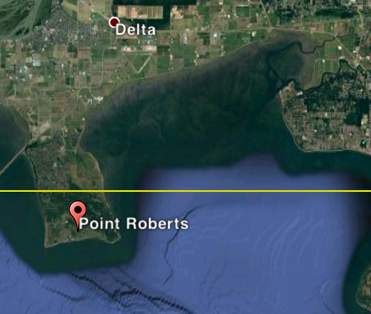 The Canada-US border cuts through a peninsula on southern British Columbia, meaning the city on it, Point Roberts, is legally part of the United States. Being such a small town, Americans living there have to drive across the Canadian border to do much of anything.

The Canada-US border cuts through a peninsula on southern British Columbia, meaning the city on it, Point Roberts, is legally part of the United States. Being such a small town, Americans living there have to drive across the Canadian border to do much of anything.