Quebec is the only French-speaking province of Canada, which, due to its unique history, has a fascinating culture distinct from the rest of the country. The capital, Quebec City, is the most vibrant centre of European influence and French culture in modern-day North America, while the province’s largest, and more cosmopolitan city, Montreal, has long been considered one of Canada’s leading destinations for those interested in art, music, and fine dining.

Quebec’s main draws are its two big cities, both of which sit along the St. Lawerence River. Montreal is in the far south, about an hour from the U.S. border, located on an island connected to the mainland by bridges. Quebec City is about three hours northeast of Montreal. About an hour and a half northwest of Montreal is the city of Mount-Tremblant nestled amid a mountain range known as the Laurentians. They’re home to the province’s ski resorts — the largest in eastern Canada.

Quebec is an overwhelmingly French-speaking province, and most public signage is in French. As it is government policy to treat French as the only language of the province, visitors may not even find English used in places where it’s commonly found in other non-English speaking countries, such as highway signs or public transportation. Montreal, however, is an extremely bilingual city with very high rates of English fluency. It is not considered controversial to assume restaurant servers, store attendants, etc. in Montreal can speak English. Outside of Montreal, however, rates of English fluency are much lower, and assuming people can speak English may be considered more rude or provocative. 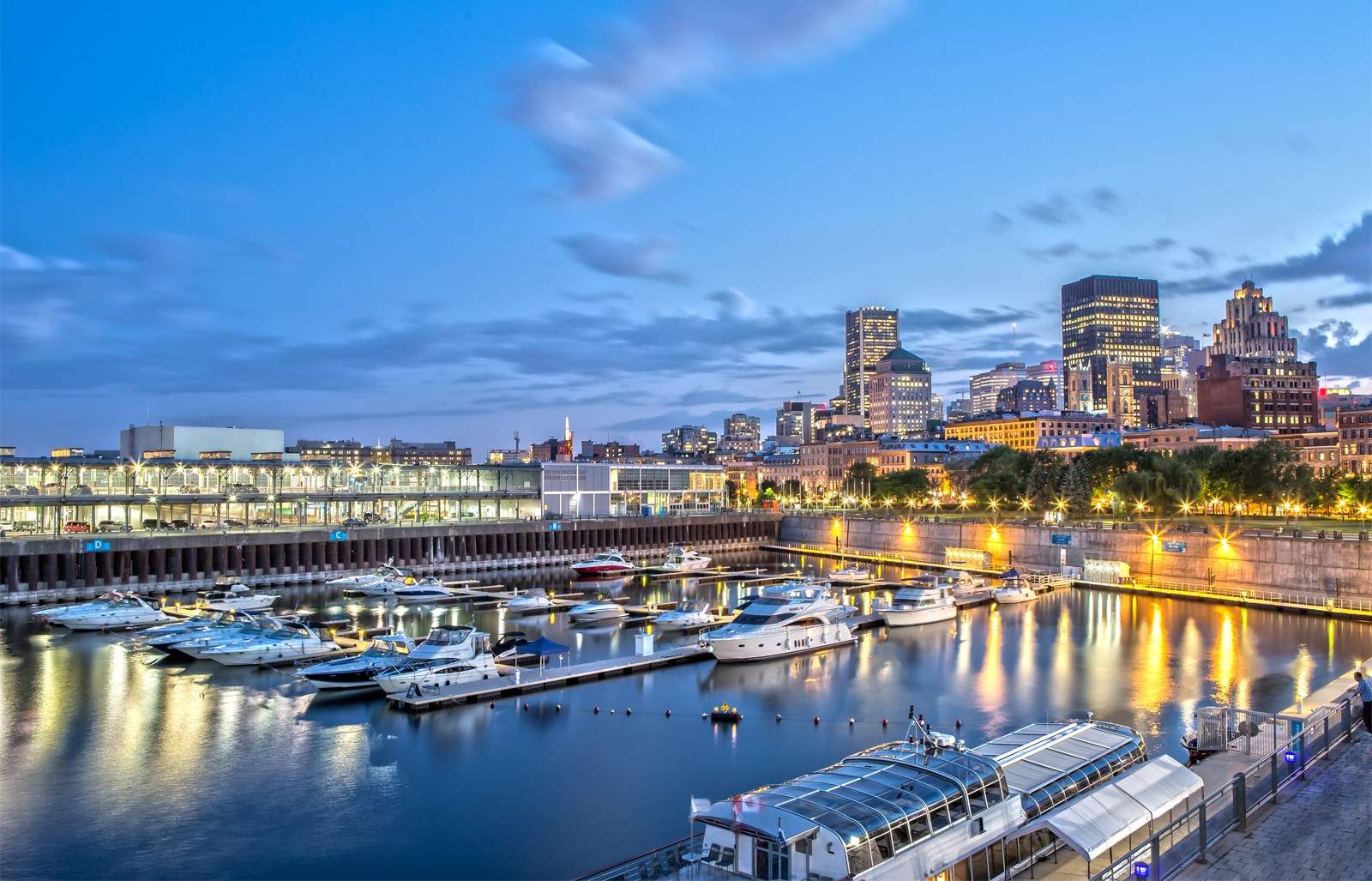 Montreal skyline, as seen from the Old Port.
Susanne Pommer/Shutterstock 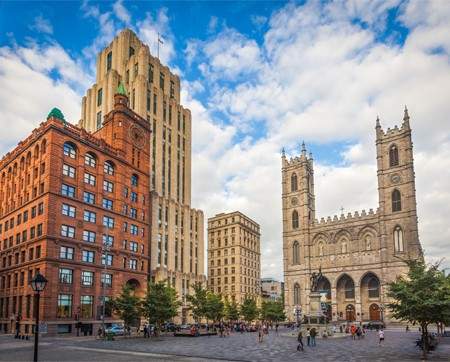 A cluster of old buildings, including the Place d'Armes, the Paul de Chomedey monument, Notre-Dame Basilica, and the New York Life and Aldred buildings in Old Montreal.

Montreal sits on an island surrounded by the Prairie River (Rivière des Prairies) to its north and the St. Lawrence River to its south, with the downtown core located on the island’s southern half. The eastern half of the city is home of the French majority, while the western half is more English, with the major thoroughfare of St. Laurent Boulevard (Boul. St-Laurent) considered the historic dividing line.

So-called Old Montreal is located on the city’s southern coast and is the most popular area for tourists, thanks to its concentration of well-preserved Victorian-era architecture, many of which now house modern shops and restaurants. The massive Notre-Dame Basilica sits in the centre, with the equally imposing City Hall and Palace of Justice nearby. The parklike Old Port waterfront is popular with cyclists and joggers — and in winter, skaters, too.

East of Pius IX Boulevard (Boul. Pie-IX) is a multi-block collection of interconnected parks that originally served as the competition grounds during Montreal’s stint hosting the 1976 Olympics. Along with the iconic Olympic Stadium, the area now contains multiple science-based museums (see below).

Connected to Montreal’s main island via the Jaques Cartier Bridge is St. Helen’s Island (Île Sainte-Hélène) which is home to the massive Jean Drapeau Park as well as the La Ronde theme park and the giant, spherical Biosphere environmental museum.

Mount Royal, to the north of downtown, is a small mountain home to extravagantly-priced real estate as well as breathtaking views of the city below. On the peak is another one of Montreal’s most iconic religious sites, Saint Joseph’s Oratory. 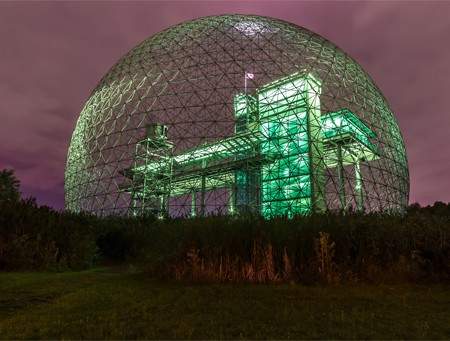 The Biosphere environmental museum on St. Helen's Island. Originally created for the 1967 Montreal Expo, it's remained an iconic piece of the Montreal skyline ever since.

The Pointe-à-Callière, also known as the Montreal Archeology and History Complex, is the city’s premiere history museum, located in Old Montreal. It contains artifacts and exhibits on the long history of the city and province, as well as touring exhibitions from around the world.

The downtown Montreal Museum of Fine Arts houses one of Canada’s largest collections of paintings and sculptures by both Canadian and European masters.

Montreal’s former Olympic park grounds (see above) are now home to a cluster of science based museums geared mainly towards young students: the Biodome, the Insectarium, the Planetarium, and a Botanical Garden. All are jointly run by an organization called Space for Life (Espace Pour La Vie) but charge separate admissions. 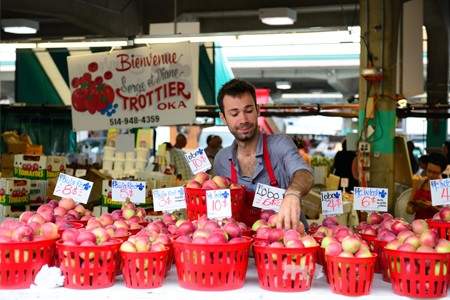 Apples for sale at Jean Talon Market, the second-biggest public market in Canada.

The main downtown shopping areas are found along St. Catherine Street West, where all the big department stores are located, and Sherbrooke Street, which has the higher-end shops. The city’s biggest mall is Eaton Centre, while a 32-kilometer sprawl of shops known as RÉSO, or the Underground City, sits beneath a significant portion of the downtown core with multiple street-level entrances.

Outside downtown, European-style public markets (or marchés) where shoppers can buy fresh produce, meat, baked goods, and more are popular with tourists and locals alike. The two biggest are Jean Talon Market, in the city’s Little Italy neighborhood to the north, and Atwater Market in the west end.

Montreal is said to have the best nightlife in Canada, with a wide variety of bars, clubs, and entertainment venues. As the birthplace of several internationally-renown bands and musicians, it’s particularly well-known for its live music scene. St. Laurent Street, St. Denis Street and Crescent Street are considered the main hubs of nightlife. The gay area is St. Catherine Street East.

Every year, two big international festivals put Montreal on the map: the Montreal International Jazz Festival (Festival International de Jazz de Montréal), which fills the city with hundreds of outdoor concerts for 11 days in late June early July, and the Just for Laughs comedy festival in July, which brings the world’s top stand-up comics to town for 20 days of shows.

Montreal is home to perhaps the most iconic team in the NHL, the Montreal Canadiens, who play at the Bell Centre. The city has a CFL team as well, the Montreal Alouettes who play on their own exclusive field known as Percival Molson Stadium. 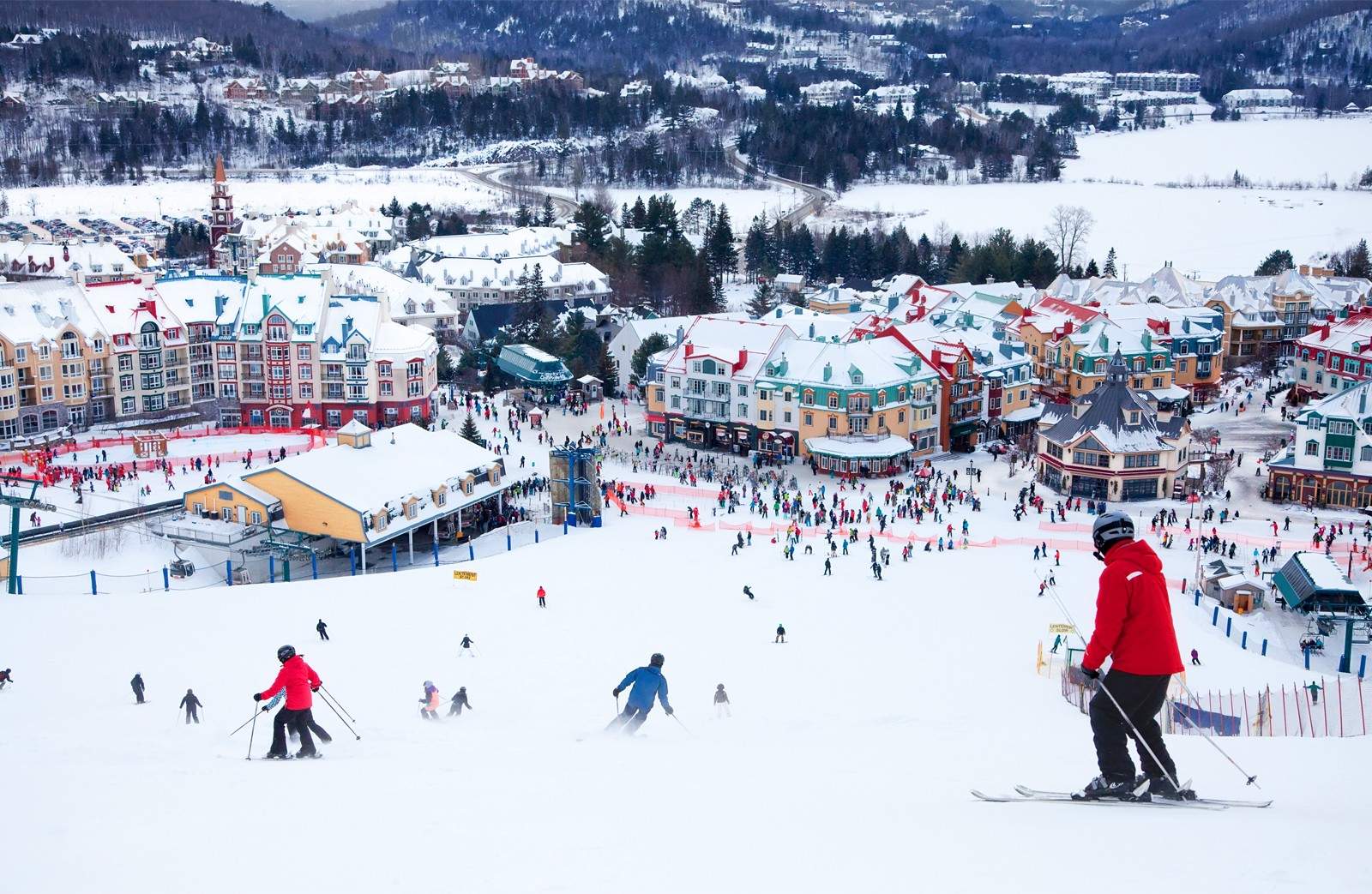 The area of Quebec around the Laurentian mountain range is a major magnet for tourists and offers a wide array of activities and attractions that take advantage of the local landscape. Along with providing ample opportunities for hiking, swimming, rafting, and dirt biking in the summer, in the winter, the Laurentians are second only to those found in British Columbia for those looking to ski, snowboard, or otherwise enjoy alpine adventures.

The main resort town is Mont-Tremblant, which contains the area’s preeminent ski slopes (located on a mountain also called Mt. Tremblant) as well as the enormous Mont-Tremblant National Park with a vast array of trails and campgrounds. Nearly equally popular is the slightly smaller city of St-Sauver-Des-Monts, home to Mt. Saint Sauver and four other peaks. Mont-Tremblant is located about an hour and a half north of Montreal and four hours south of Quebec City. 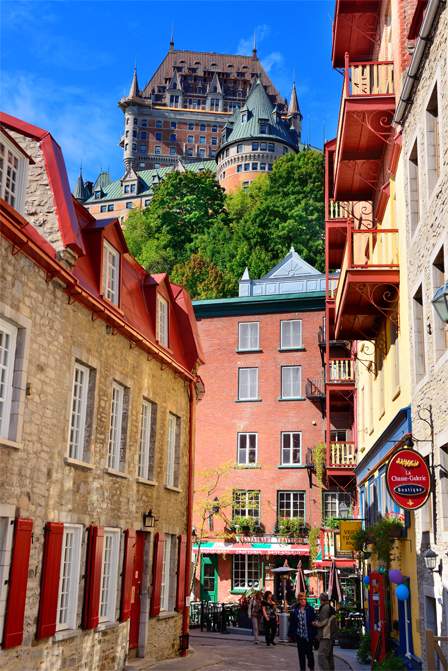 Quebec City streets with the Chateau Frontenac looming in the background.

Quebec City (often called simply “Quebec” by locals) is the best-preserved European-style big city in Canada, and there’s no shortage of unique buildings and monuments for those interested in old-world architecture. Most of this is concentrated in the clearly-named Old Town (Vieux Québec) areas, which are split into Upper (Haute) and Lower (Basse) Old Town neighborhoods. Key sights in the Upper Old Town include hilltop Citadel — the largest surviving fortress in North America — and the long Fortification wall which once protected the city. Both are open to tours. The Château Frontenac is the province’s most famous building, and the supposed “most photographed hotel on earth,” while the grand Notre Dame Basilica is one of the oldest and most beautiful Catholic cathedrals on the continent. Multiple pedestrian trails and boardwalks including Samuel De Champlain Promenade (La Promenade Samuel-De Champlain), Governors’ Terrace (Terrace des Gouverneurs), and Dufferin Terrace (Terrasse Dufferin) offer scenic views of the river and neighborhoods below.

The Upper Old Town connects to the Lower via a Funicular, which is a sort of railway car that descends a steep hill, though the city’s various steep staircases are an equally iconic attraction. A large public square known as Place Royale is the centerpiece of the Old Town, along with another massive Catholic church, the Church of Our Lady of Victories (Eglise Notre-Dame-des-Victoires). Lower Town marks the coast of the St. Lawrence River with the Old Port.

Outside “the city walls,” as they say, is one of the most famous sites in Canadian history: the Plains of Abraham where the English army defeated the French to secure control of Canada. Today, the sprawling area is known as Battlefields Park (Parc des Champs-de-Bataille) and contains museums and exhibits on Quebec history, as well as plenty of green space for walks, sports, and picnics. An hour’s drive outside the city is Montmorency Falls (Chute-Montmorency), a 272-foot waterfall and another leading natural attraction of the greater Quebec City area. 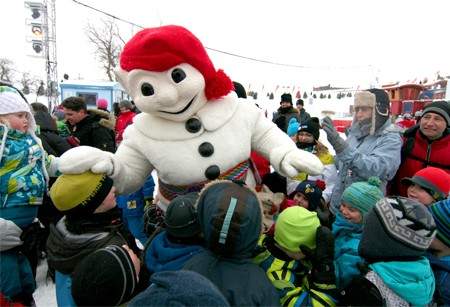 Friendly Bonhomme greets young fans at the 2013 Carnaval. Though rarely seen outside Quebec City, he's become the informal mascot of the entire province.

Many of Quebec City’s historic landmarks, particularly the churches and fortifications, double as museum, with informative displays, exhibits, and tours to provide visitors with greater context for what they’re seeing. The city’s leading history museums are the Museum of French America (Musée de l’Amérique francophone), which documents the history of French colonists on the continent, and the nearby Museum of Civilization (Musée de la civilisation or MCQ), which is a more general history museum with both Canadian and international-themed exhibits. In the Upper Old Town, the National Museum of Quebec Fine Arts (Musée national des beaux-arts du Quebec, or MNBAQ) houses a collection of historic and modern art with a focus on Quebec painters.

Quebec’s most famous festival, the winter Carnaval, has been held every year in Quebec City for over six decades. Spanning a 17 day period between late January and early February, the festival is a celebration of winter, with parades, snow sculptures, winter sports, and Bonhomme, the lovable French-Canadian snowman mascot.

Though Quebec is not nearly as Catholic as it once was, the June 24 Feast Day of John the Baptist (Fête de la Saint-Jean-Baptiste), the patron saint of French-Canadians remains a provincial holiday (officially known as La Fête Nationale), and the once hyper-religious Quebec City continues to celebrate hardest. It’s a deeply patriotic day of outdoor revelry with street parties, concerts, and fireworks. 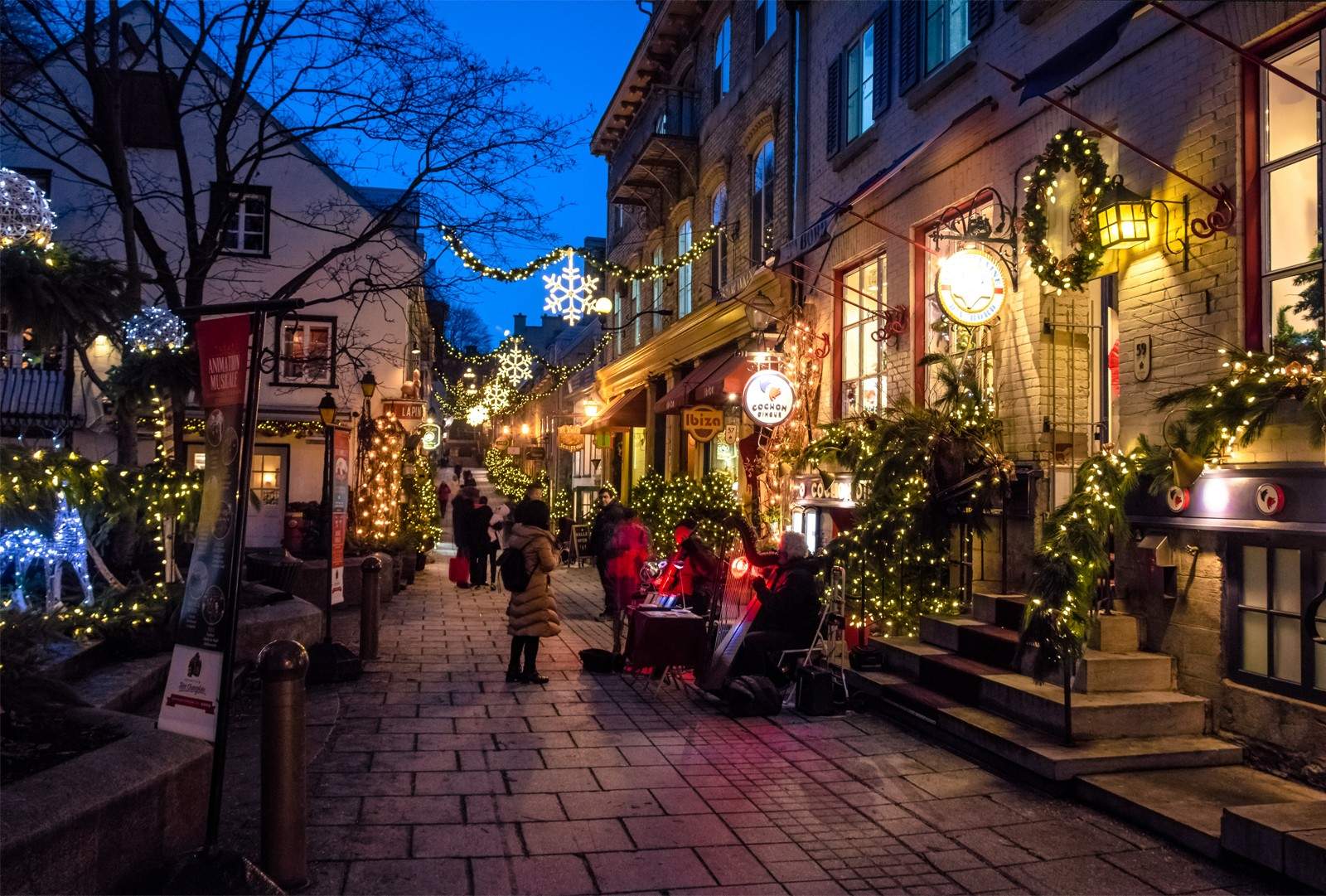