The House of Commons of Canada

When Canadians think about national politics, they’re usually thinking about the people who work in the House of Commons, the body that houses so many of the country’s leading politicians. With the Canadian Senate a largely ignored and mostly powerless institution, it’s the House that truly dominates parliamentary government in Canada.

As we learned in the parliamentary system chapter, the House of Commons has two basic jobs, proposing and passing laws, and deciding who gets to be prime minister. In this chapter, we’ll look at the details of the House a bit more closely, and examine the people and rules that make the institution work.

The House of Commons consists of 338 elected Members of Parliament, better known as simply “MPs” each of whom represents a different electoral district, also known as a riding or constituency, which is a specific geographic region of the country. The different provinces of Canada are divided into ridings according to the principle of representation by population (or “rep-by-pop“) which means the larger provinces elect more MPs than the smaller ones. The official representation formula is a bit complicated, but broadly speaking every MP represents a riding of about 100,000 people or so.

The most recent election for the House of Commons was held on October 21, 2019. Here are the current party standings, along with the number of seats per province:

A riding’s borders are drawn by a non-partisan committee and are usually based on some preexisting geographic community, like a city or town. The riding’s name will usually reflect this pretty clearly, for example, the riding of “Ottawa South” or “Edmonton-Sherwood Park.” Riding shapes and names tend to change a lot as borders are being constantly redrawn to reflect population shifts.

Becoming an MP is rarely anyone’s first step in their political career. Most members get elected only after a successful tenure as a local political figure of some note, such as a city councillor, mayor or member of the provincial parliament. In other cases, they may be an accomplished figure in some other professional field, such as business, academia or the media. In the run-up to a federal election, MP candidates are usually selected by a small gathering of political party members in that community known as a riding association, but in some cases the party leader may hand-pick candidates.

Once elected, MPs become divided into two camps: frontbenchers and backbenchers, terms that literally reflect where in the chamber of the House of Commons they sit. Those on the front bench are the ones picked to be members of the prime minister’s cabinet or the opposition parties’ shadow cabinets, while those in the back are the ones that didn’t make the cut. Every MP aspires to be a member of the front bench someday, whereas being a backbencher is synonymous with obscurity, and a sign your political career is going nowhere. 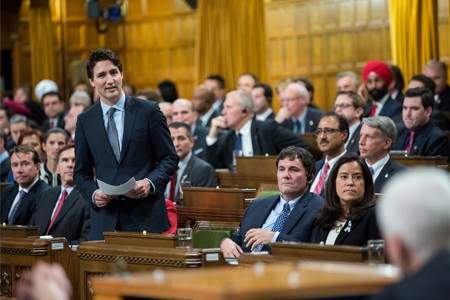 Prime Minister Trudeau (b. 1971) speaks from the center of the front bench of the House of Commons — the traditional seat of the prime minister. He is surrounded by his cabinet ministers.

The Front Bench and Cabinet

After a federal election, the political party that elects the most members to the House of Commons forms the government and their party leader becomes the Prime Minister of Canada. The new prime minister then selects a couple dozen of his favourite MPs to become cabinet ministers in his administration (or “ministry“).

Each cabinet minister heads a department of the Canadian federal government. Since Canada has one of the biggest cabinets in the western world, there are an awful lot of these, and they vary greatly in size and importance. At the top of the pyramid are the departments of finance, justice, defence and foreign affairs, whose ministers handle some of the nation’s most important business, while at the bottom end are  the ministers of small sub-departments like Sport Canada that rarely enter the headlines. Throughout the course of his administration, a prime minister will reassign ministers from one department to another many times (these are known as cabinet shuffles). It’s a sign that you’re really going places if every shuffle brings you higher up the ladder, while a demotion can be quite an embarrassing setback.

Though one of the best ways to get a good job in the cabinet is to be a close ally or confidant of the prime minister, in recent decades a lot of cabinet positions have started being assigned on the principle that the cabinet should accurately reflect the “face of Canada” and include MPs from all races, genders, and regions of the country. The fact that many cabinet ministers are chosen more for optics than qualifications has helped weaken the cabinet’s power in recent years. As discussed in more detail in the bureaucracy chapter, many cabinet departments are now largely run by the professional civil service, while the minister is a more distant leadership figure involved in setting broad agendas and priorities. 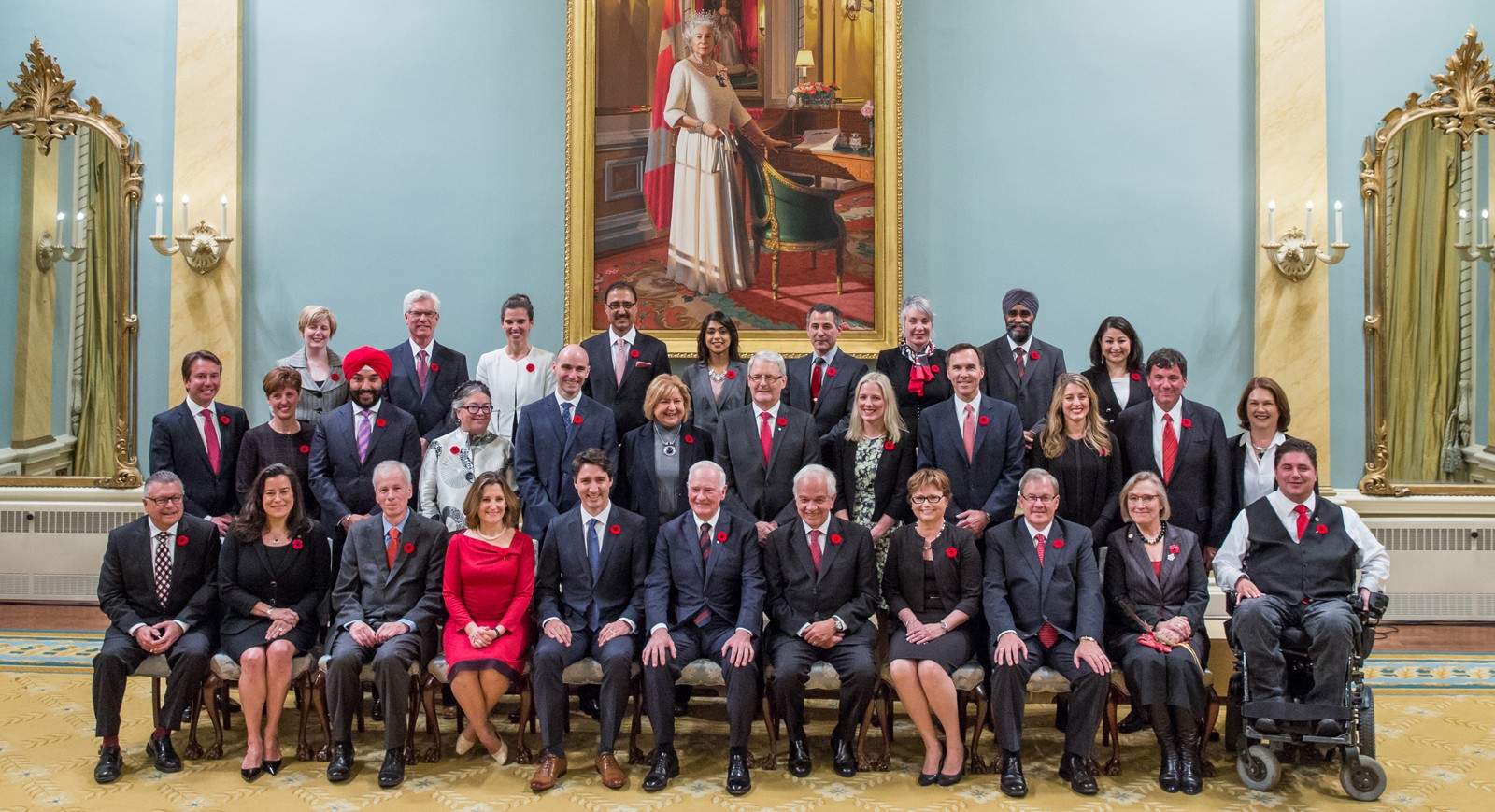 Prime Minister Trudeau (b. 1971) and his 2016 inaugural cabinet.
Justin Trudeau/Flickr 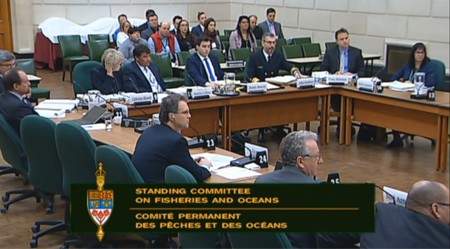 A 2017 meeting of the House Committee on Fisheries and Oceans. Committee meetings are often broadcast live on television on the Canadian Public Affairs Channel (CPAC), along with most other business of the House of Commons.

Below the cabinet are the House committees, which are special groups of MPs that gather to discuss and modify the bills that are introduced into the House before they go to the floor of the chamber for a final vote of all members. Right now, there are about 24 different House committees in all, each one specializing in a particular realm of policy; for example, the House Committee on International Trade or the House Committee on Natural Resources. From time to time the prime minister will create a special committee to address some temporary matter of national importance, for example a special committee on a war or a political scandal.

Most committees have about 12 members, who are appointed by the various political party leaders in proportion to their seats in the House as a whole. The House’s largest party gets to appoint the most members of every committee, as well as the committee chairman. In order to promote separation of powers, cabinet ministers are rarely members of committees, though they will often make an appearance at their proceedings and a committee will rarely draft legislation that the relevant minister wouldn’t agree with. As they perform their duties, committees will often summon expert witnesses to testify and offer feedback on their ideas and concerns. 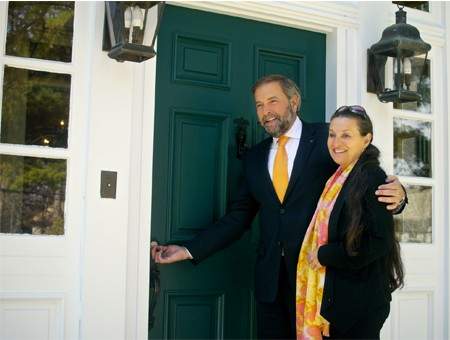 Former opposition leader Thomas Mulcair (b. 1954) and his wife move into Stornoway, the official residence of the leader of the opposition, in April of 2012. Mulcair had been elected leader of the NDP — the second biggest party in the House — earlier that year, following the death of former party leader Jack Layton (1950-2011).

Opposition Parties in the House

The political party with the second-most seats in the House is known as the Official Opposition, and its leader is given the grandiose title of Leader of Her Majesty’s Loyal Opposition. The opposition organizes itself more or less the same way as the government, complete with a shadow cabinet of MPs called critics who offer targeted criticisms of their ministerial counterparts. So, for example, it’s the job of the opposition finance critic to offer specific criticism of the government’s fiscal policies, and so on. In theory, this is supposed to demonstrate to voters the official opposition is just as qualified to rule as the government, and helps provide a running contrast of ideas and priorities.

In one of Parliament’s more sensational spectacles, four times a week both the cabinet and opposition face off in a televised sparring match known as Question Period. During Question Period, ministers and critics ask each other pointed, angry questions on the floor of the House of Commons in an attempt to illustrate just how awful and dangerous the other party is, while the back benchers yell, jeer and applaud in response. At one time, this was a somewhat legitimate way for politicians to hold each other accountable before the TV cameras, but these days it’s almost universally acknowledged that Question Period is largely for show, and a way for politicians to engage in the sort of theatrical partisan bickering that impresses the base and makes for good sound bytes on the nightly news. 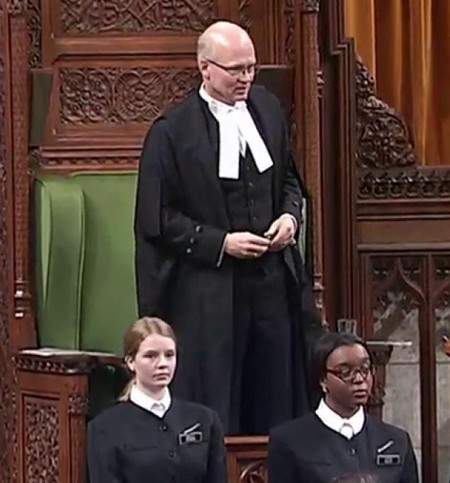 The Speaker of the House of Commons sits at the back of the House chamber in a large, throne-like chair surrounded by aides known as pages. He wears a robe with a cross collar similar to what Canadian judges wear. Seen here, former speaker Geoffrey Regan (b. 1959) and some pages.

Third and fourth place parties in the House enjoy few rights and a generally low profile. Though their members may occasionally speak in Question Period, they will almost certainly be less organized and forceful, due to their low seat count. They may or may not chose to organize themselves into a shadow cabinet too, but it will have far less importance.

The Speaker of the House

The formal head of the House of Commons is the Speaker of the House, the oldest office of the Canadian government along with the prime minister and governor general.

Once in office, the speaker’s main job is to serve as the neutral chair of any parliamentary debate or vote, calling on MPs when it is their turn to speak, scolding or disciplining those who speak out of order, declaring motions to have passed or failed, and generally enforcing the parliamentary rules of order necessary to make House business unfold in a smooth and organized manner. Members of parliament do not speak directly to each other when they debate during Question Period, but instead begin every comment with “Mr. Speaker…”

Though he’s usually a member of the Government caucus, the speaker of the House is not supposed to be involved in anything to do with actual policy or lawmaking, and has his own office and staff that are separate from the cabinet. Since 2019, the current speaker of the House has been Anthony Rota (b. 1961), a Liberal member of parliament who has represented the riding of Nipissing—Timiskaming, Ontario since 2015 (and previously from 2004 to 2011). As a general rule, the speaker is not a particularly well-known Canadian politician to the general public.

More About the Canadian House of Commons 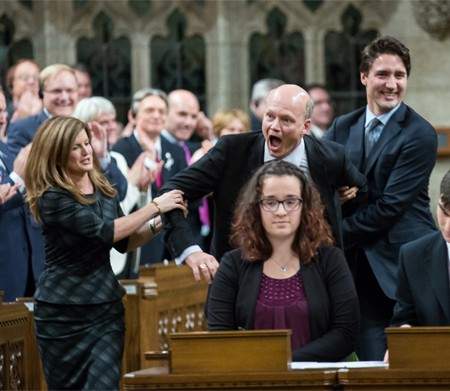 In ancient England, being speaker of parliament was not considered a desirable job. To this day, when a speaker is elected in Canada, he or she still goes through a little mock protest and has to be "dragged" to the chair by the prime minister and opposition leader. Seen here, Speaker Geoff Regan (b. 1959) protests his 2015 election.

In ancient England, being speaker of parliament was not considered a desirable job. To this day, when a speaker is elected in Canada, he or she still goes through a little mock protest and has to be "dragged" to the chair by the prime minister and opposition leader. Seen here, Speaker Geoff Regan (b. 1959) protests his 2015 election.