So who's in charge?

Politics plays a large role in Canadian life and identity. The country has been a functional democracy for nearly 150 years, and Canadians are proud of their history as a free people with a government that generally respects their wishes and protects their rights. Freedom also means that Canadians have the right to be unsatisfied, however, and Canadian politics will reliably reflect the deep divisions of such a large and diverse country.

Canada’s style of government is based on the British system, with the national government run as a parliamentary democracy and a constitutional monarchy. Canada also resembles the United States in that the country is divided into 13 provinces and territories, all of whom have their own separate governments with unique powers.

Day-to-day Canadian politics are defined by endless back-and-forth debates between right and left, and similarly heated arguments between the federal and provincial levels of government. There also tends to be a fair deal of debate about the institutions of the Canadian government itself, and whether all the various parts of the Canadian democratic system are really working the way they’re supposed to. 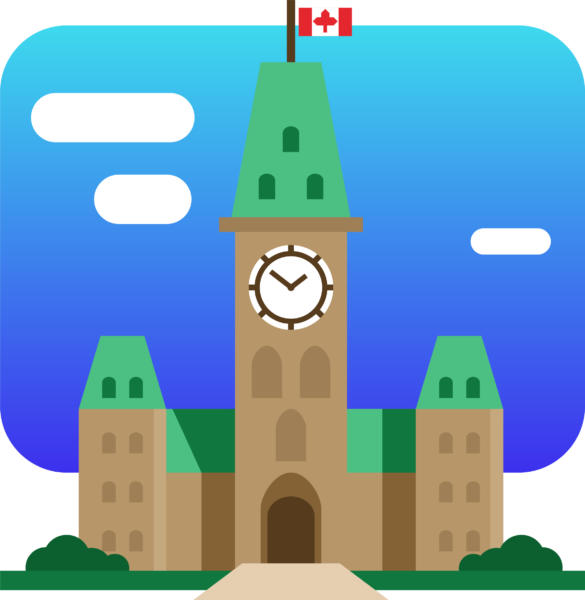 The laws that set out how Canada's government works.

Canada's elected chamber of parliament, which creates most of the country's national laws.

The unelected, upper chamber of Canada's parliament with the power to veto legislation.

Canada's relationship with the monarch of Great Britain, who serves as Canada's head of state.

The person who functions as Canada's head of state, on behalf of the British monarch.

The Prime Minister of Canada

The powers and duties of the elected leader of the Canadian government.

The parties Canadian politicians belong to.

How elections work in Canada.

The government agencies and departments that provide services to Canadians.

The system of judges who interpret Canadian law.

Governments of Canadian provinces and cities.