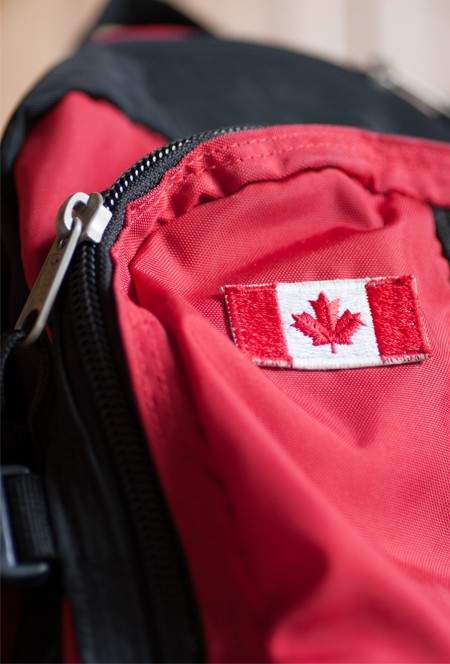 Many Canadians wear identifying maple leaf flags on their backpacks when travelling abroad on the assumption that foreigners love Canadians and will be excited to see one.

Canadian patriotism is a unique sort of national pride in that it relies heavily on how outsiders view the country. Part of this is doubtless due to the fact that Canada is one of the few countries on earth where the majority of foreign stereotypes about its people are either neutral (for example, Canadians being boring, unemotional or forgettable) or positive (Canadians being nice, polite, gentle and so on). Many of these stereotypes are both encouraged and spread by Canadians themselves.

Canada is also a country whose culture emphasizes the importance of introspection and modesty, however. In recent years particularly, a number of Canadian critics have argued that many well-worn clichés about the stereotypically “goody-goody” Canadian are quite vain, outdated and inaccurate, and represent an effort to spin what are actually problems with Canadian society into unjustified self-regard. There is, as they say, two sides to every story, and the truth is often somewhere in the middle.

The following is a table of stereotypes that patriotic Canadians like to believe about themselves, or believe others think about them. On the other side is a list of rebuttals which are almost equally common.

PATRIOTIC MYTH / STEREOTYPE
COUNTER-ARGUMENT
Canadians are polite and respectful.
Canadians are passive and boring.
Canadians are law-abiding and have an orderly society.
Canadians are too trusting and uncritical of their laws and authority figures.
Canada is a caring nation in which the state actively assists the less fortunate, including the poor, the elderly, minorities, etc.
Canada is governed with a socialist mindset that discourages personal responsibility and self-reliance in favour of government dependence.
Canada is a tolerant, multi-cultural society that promotes ethnic, cultural and linguistic diversity, and does not demand its immigrants assimilate.
Canada is a country lacking a strong sense of national unity or purpose, and is thus becoming highly fragmented along racial and language lines.
Canadians have a very subdued form of patriotism.
Canadians don't have much to be patriotic about.
Canadians are moderates.
Canadians are afraid to express controversial opinions.
Canadians don't engage in hero / celebrity worship.
Canadians are resentful towards successful people.
Canadians are beloved in foreign countries.
Other countries don't know much about Canada.
Canadians are modest.
Bragging about being modest is not modest.
Canadian society is similar to the United States, but is superior because of the uniquely Canadian qualities mentioned above.
Canadian society is blindly and obsessively anti-American, which encourages Canadians to ignore the criticisms above.
Next Chapter
Share
Share on Twitter Share on Facebook Share on LinkedIn