Alberta, the largest of Canada’s three prairie provinces, contains a large portion of the Rocky Mountains and most tourism to the province centers around visiting the beautiful parks that surround them. The province’s two main cities, Calgary and Edmonton, are Canada’s largest outside the Toronto-Montreal-Vancouver axis, though they’re much less popular as tourist destinations. The larger city, Calgary, is generally acknowledged to contain more to see and do, though Edmonton contains a few famous attractions, as well.

Most Albertans live in either Calgary or Edmonton and the cities are about three hours apart, with Calgary in the south and Edmonton in the north. The Rocky Mountain region is on the province’s far west, along the border with British Columbia. Everywhere else is largely rural, home to small farm towns and oil fields. 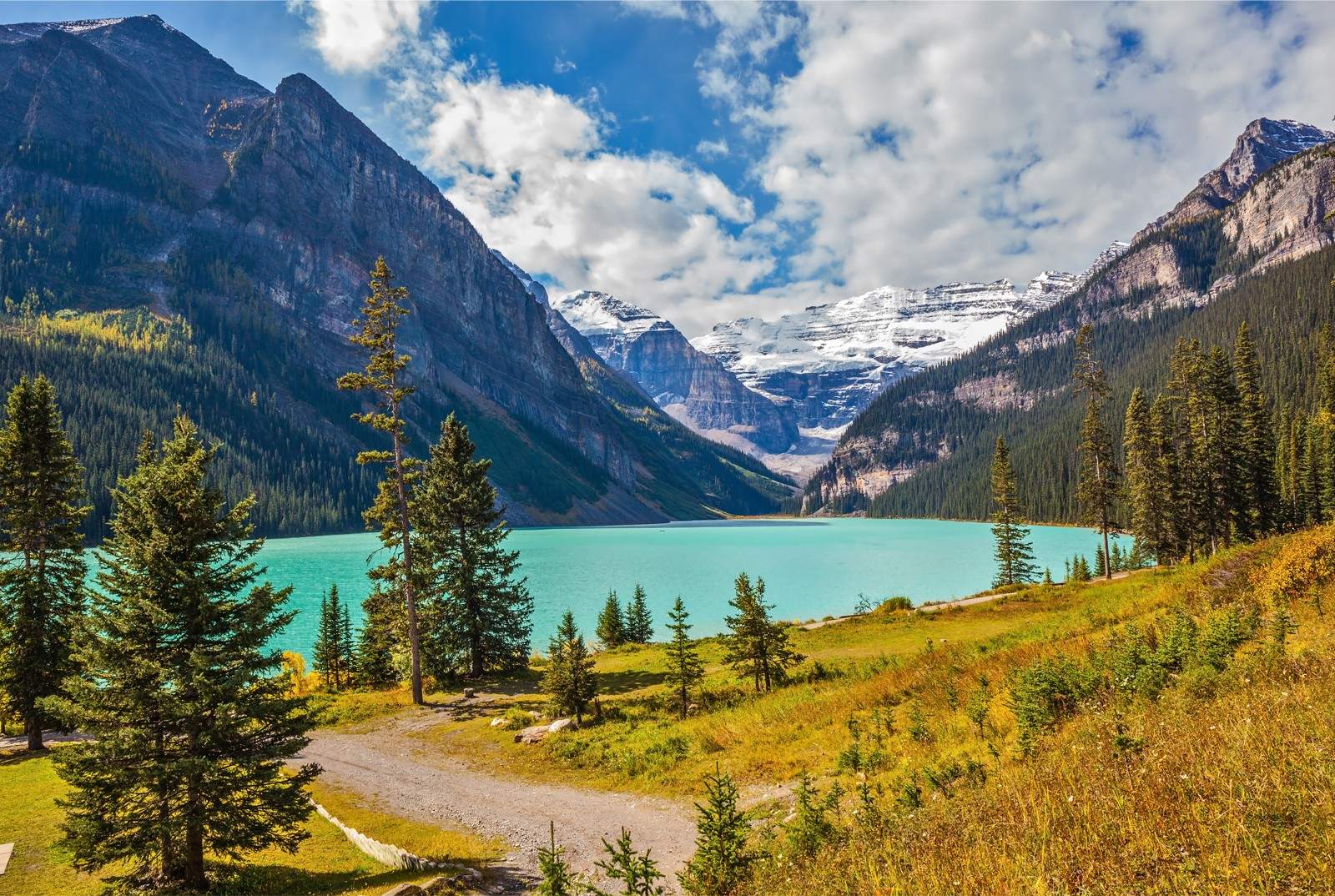 The most iconic tourist destination in Alberta — and possibly the entire country — is the beautiful Banff National Park and its emerald-green Lake Louise. Containing over 6,000 square kilometers of unspoiled Rocky Mountain scenery, Canada’s most popular outdoor resort is home to virtually every activity you could imagine, with over 1,000 km of hiking trails, a dozen campgrounds, numerous ski hills, a 27-hole golf course, three hot springs, and a wild river (the Kicking Horse) that’s ideal for white water rafting. There are no shortages of shops, hotels, and restaurants in the village of Banff Town, which is usually packed with tourists.

Three hours north of Banff is Jasper National Park, which is broadly similar to Banff in terms of natural beauty, but is harder to get to, has fewer activities and is thus slightly less popular. Some prefer its more laid-back vibe. Even more laid-back are the smaller-still mountain communities of Canmore Kananaskis, which is near Banff, and Waterton Lakes National Park which is in Alberta’s most south-west corner. All of the Rocky Mountain parks are a couple hours from the two big cities. Banff, Canmore, and Waterton are closer to Calgary while Jasper is closer to Edmonton. 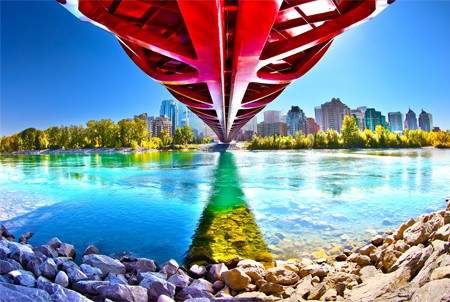 Calgary's Peace Bridge, over the Bow River that divides the city. Its eccentric design, though controversial at first, has now become an icon of the city.

The largest city in Alberta.

Calgary is split in half by the Bow River, which has a pleasant coastline for walking and in the summer is popular for “floating” — what locals call riding in inner tubes. The river is crossed by multiple bridges, with the recently-completed Peace Bridge the most architecturally interesting.

The 160 meter tall Calgary Tower is the city’s most famous landmark, and like most buildings of its sort, it contains a rotating restaurant and observation deck at the top. It’s no longer the tallest building in Calgary, however — that honor goes to the uniquely curved Bow Building, recognizable from afar with its criss-cross design. Equally iconic is the sloping roof of the Scotiabank Saddledome, home of the city’s NHL team, as well as other sports events and concerts.

Within walking distance of downtown is the massive Calgary Zoo which encompasses over 159 hectares and houses a vast assortment of Canadian and foreign animals, as well as exhibits on Alberta’s dinosaur-filled past.

Calgary postcards often feature pictures of the Ski Jump Towers, a relic of the 1988 Olympics found on the edge of the city limits. The surrounding Olympic Park is now run by a company named WinSport that offers a variety of public activities, including a Zipline and bobsled. 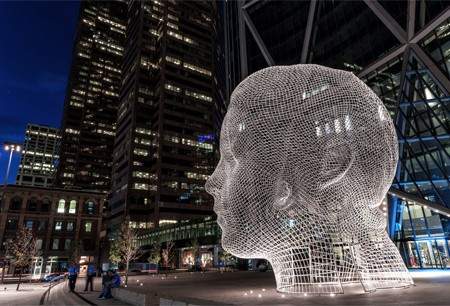 "Wonderland," a sculpture by famed Spanish artist Jaume Plensaat (b. 1955) at the base of downtown Calgary's Bow Building.

The Glenbow Museum is Alberta’s largest museum, featuring an extensive history of the province from aboriginal times to the present, as well as contemporary artwork and traveling exhibits from around the world.

Spanning over 127 acres, Heritage Park Historical Village is a vast village of antique buildings containing re-creations of Canadian life from the Victorian era to the 1950s, complete with costumed actors.

8th Ave SE, better known as Stephen Ave (Calgary streets often have two names) is the primary shopping district. Closed to car traffic in the summer and weekends, it contains a vast array of shops, restaurants, and vendors, many of which are housed in iconic Victorian-era sandstone buildings. An enormous shopping mall known as the CORE runs parallel to a portion of 8th, and contains most major retail chains, as well as a large indoor park, the Devonian Gardens, on the top floor.

Many blocks away, 17th Ave SW, also known as the Red Mile, is the other trendy shopping area, but is better known for its bars and restaurants. A 15 minute drive from the downtown core is the city’s largest mall, the Chinook Centre, which has everything the CORE doesn’t.

The Red Mile is Calgary’s iconic drinking and party zone, named after the color of Calgary’s hockey team, the Flames, which appears in considerable abundance on game nights. The Mile is home to many of the city’s oldest and most iconic bars and lounges. 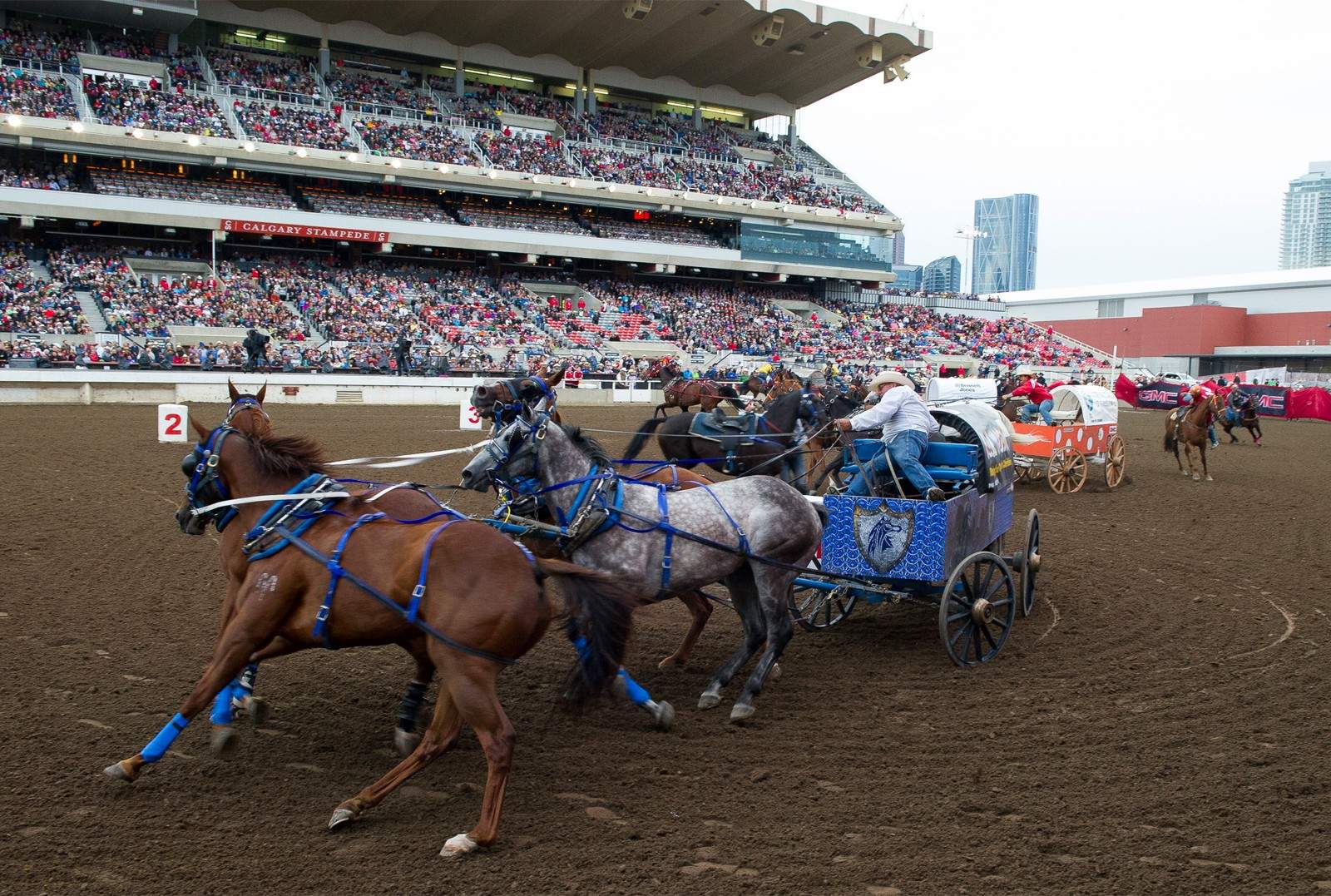 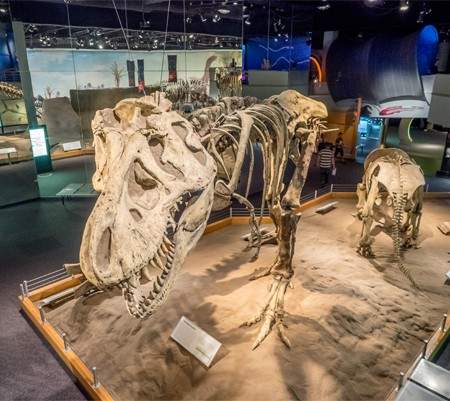 A T-Rex skeleton display at the Royal Tyrrell Museum in Drumheller.

The Calgary Stampede is Canada’s biggest party, and takes over much of the city for 10 days every July. Though the 100-year-old festival is officially supposed to revolve around watching traditional cowboy sports like bronco riding and steer wrestling, the modern-day Stampede has grown to offer something for everyone, including live concerts, carnival rides, shopping, and plenty of hot, greasy food.

An hour and a half from Calgary, the Royal Tyrrell Museum in Drumheller houses a vast collection of exhibits on life in prehistoric Canada, including an array of dinosaur skeletons uncovered from the Alberta badlands. The bizarre landscape of the badlands themselves, which surround the museum, are fun to explore as well. 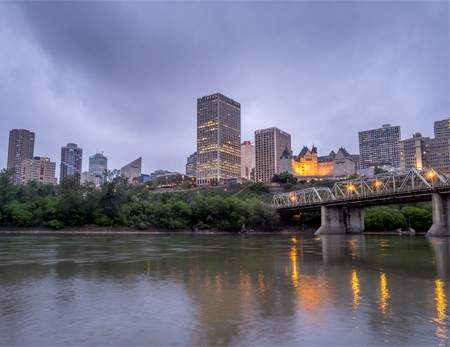 The skyline of Edmonton on the base of the Saskatchewan River.

Edmonton is split in half by the North Saskatchewan River and ample parklands surround the coasts. The downtown area is located on the north side.

The city’s most iconic building is the enormous sandstone structure that houses the Legislative Assembly of Alberta and four glass pyramids on the south side of the river that house the Muttart Conservatory, a massive indoor garden and museum. An equally grand glass pyramid can be found on the roof of the distinctive City Hall building. Surrounding city hall is Sir Winston Churchill Square, a large public plaza.

The gigantic Hotel Macdonald is Edmonton’s fanciest hotel, and the city’s most prominent example of Victorian-era architecture. Outside of downtown, the neighborhood of Old Strathcona contains most other historic buildings of note. 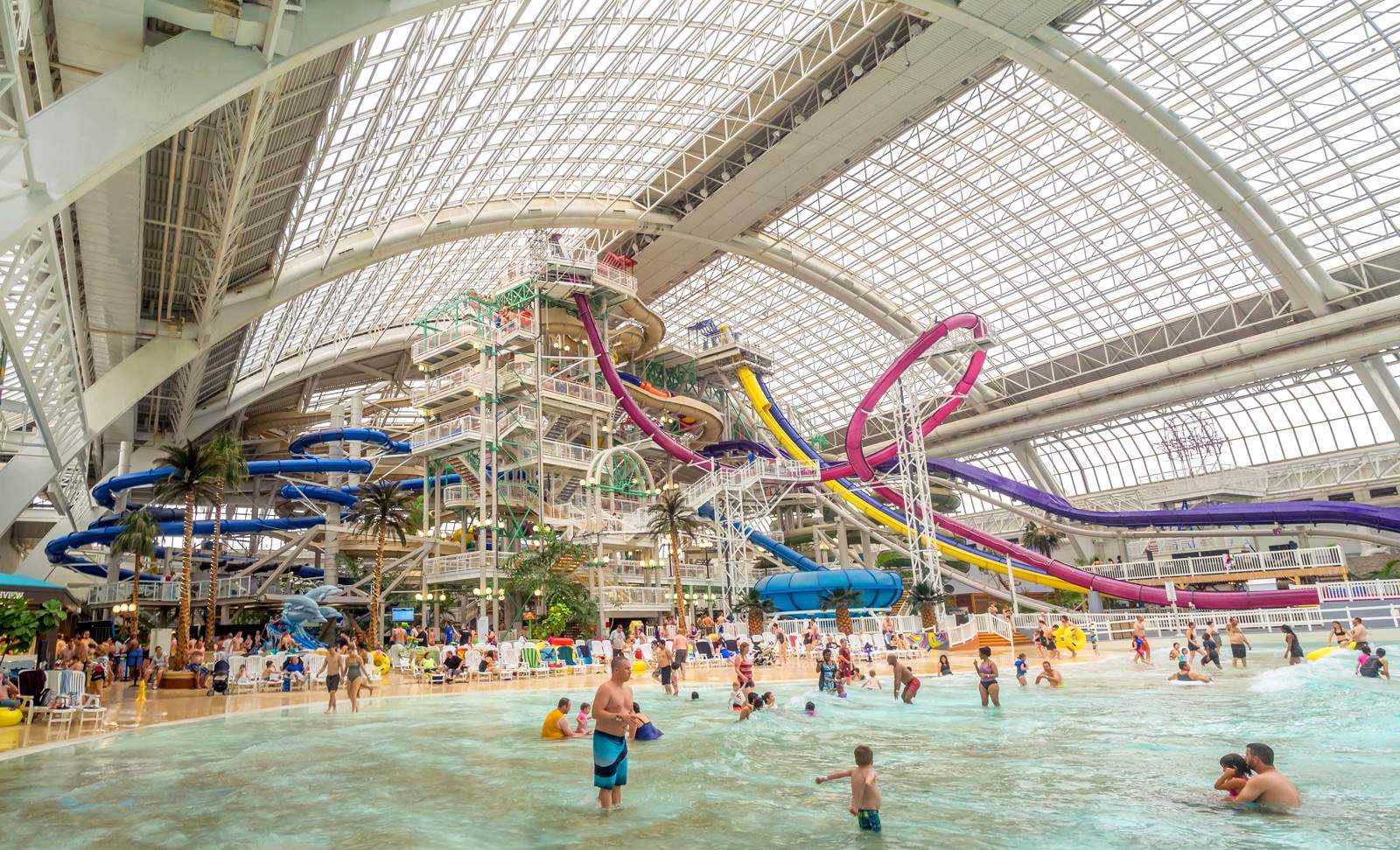 The World Waterpark at the West Edmonton Mall.
Jeff Whyte/Shutterstock 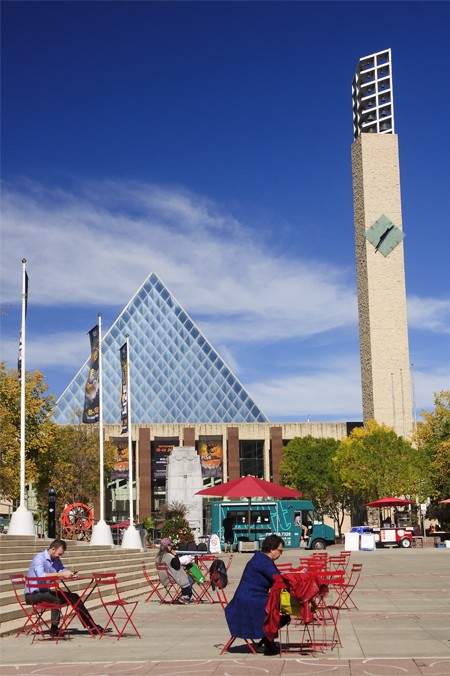 Most of Edmonton’s shops and restaurants are concentrated around the long Jasper Ave. (also known as 101st Ave) which runs through the downtown core, and the Old Strathcona neighborhood, centered around Whyte Ave (also known as 82nd Ave), which has a more bohemian character.

More than anything else, however, shopping in Edmonton is synonymous with the enormous West Edmonton Mall, which was at one time the largest mall in the world. Though the 1980s-era building is hardly state-of-the-art by today’s standards, its size remains awe-inspiring. It contains over 800 shops and countless other gimmicky attractions, including a roller coaster, a waterpark, a petting zoo, mini-golf, and a re-created 16th Spanish galleon. It’s about a half-hour drive from downtown.

The Art Gallery of Alberta is a wild-looking building containing the province’s largest collection of historic and contemporary art from both Canadian and international artists, with constantly changing exhibits.

Edmonton is unexpectedly home to the world’s third-largest fringe festival, run by a local outfit called Fringe Theatre Adventures. Held in August, Edmonton Fringe is an 11-day celebration of independent plays, story slams, comedy, magic, busking, and all other forms of public performance. A global assortment of talent stage shows all over town. Ticket prices are quite cheap.

Fan of more conventional performances can check out a play at the Citadel Theater, or a concert by the Edmonton Symphony Orchestra at the beautiful Winspear Centre.

As Edmonton is not exactly a major tourist destination unto itself, the surrounding area offers limited appeal for visitors. Parks and campgrounds are the main attractions, primarily Jasper National Park (see above), and to a lesser extent Elk Island National Park, which, though beautiful, has the dubious distinction of being Alberta’s only national park not recognized as a World Heritage Site by the U.N.