Canada’s form of government is based on the British parliamentary system, also known as the Westminster System, a style of democracy adapted from centuries of English tradition. Canada’s founders believed the British had the best form of government in the world, and the opening lines of the Canadian constitution promise Canada will have a “Constitution similar in Principle to that of the United Kingdom.” 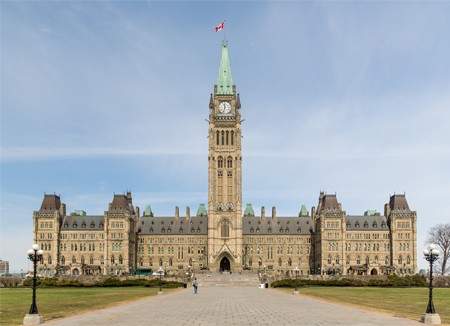 Canada's parliament buildings, known as the Centre Block were completed in 1922, after a fire destroyed the previous ones. The clock tower in the centre, known as the Peace Tower, was finished in 1927. The left wing houses the Senate while the right wing houses the House of Commons. Unfortunately, for now, the Centre Block building is no longer being used (see sidebar).

The Parliament of Canada

Housed in an enormous neo-Gothic building in the capital city of Ottawa, Ontario Canada’s national parliament is a bicameral legislature, meaning it’s split into two chambers: the House of Commons and the Senate. (The monarchy, technically, is also considered part of the parliament, though it does not participate in government).

The House of Commons consists of 338 elected politicians representing different regions of Canada (known as members of parliament, or MPs), while the Senate consists of 105 important people (known as senators) who have been appointed by various Canadian prime ministers.

The Senate is fairly powerless and inconsequential (more on this later), so when most Canadians refer to “Parliament” they are usually referring to just the House of Commons.

The House of Commons

338 members (MPs) all elected at the same time, every four years, in a Canadian federal election. No term limits, members can be re-elected indefinitely. Members represent 338 different geographic districts, or ridings, across the country, with larger provinces electing more members than smaller ones.

Go to the House chapter

105 senators appointed by the prime minister of Canada whenever vacancies occur. Senators serve until retirement or their 75th birthday and cannot be fired. Senate seats are not distributed among the provinces according to any consistent logic.

Go to the Senate chapter

Canadian democracy obeys a principle sometimes called responsible government, which means that the rulers of Canada are accountable to the people they govern. In practice, this means that the part of the Canadian government that is directly elected by the people, which is the House of Commons, should get to decide who holds the most important offices in that government.

After the results of a House of Commons election come in, the Governor General of Canada ceremonially appoints the leader of the political party that has elected the most members (MPs) to the House as prime minister, and the prime minister forms a government. In practice, “forming a government” means picking a cabinet, which the prime minister does by appointing other high-profile MPs from his party to key positions in the executive branch (foreign minister, attorney general, etc.). He will also select various qualified non-politicians to run the federal bureaucracy.

The second-largest political party in the House of Commons is appointed as the Official Opposition, or, if we want to use the grandiose, formal name, Her Majesty’s Loyal Opposition. The leader of the second-largest party is given the title of Leader of the Opposition and appoints a shadow cabinet of politicians (known as critics) from her party to offer targeted criticism to the government of the day. This is discussed in more detail in the House of Commons chapter. 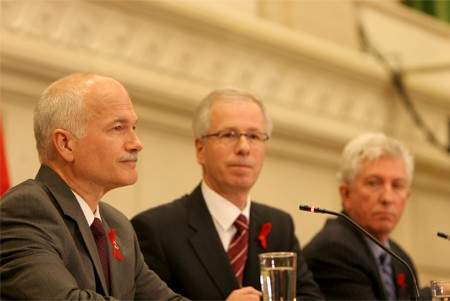 In 2008, shortly after Conservative Prime Minister Stephen Harper (b. 1959) was re-elected to a second minority government, the leaders of Parliament's three centre-left parties, seen here, got together and argued they should be allowed to form a coalition government to replace Harper. This was the first time in Canadian history such a move had been attempted, and it was enormously controversial. Harper appealed to the governor general, who had final say, and the coalition idea was rejected.

Depending on how the results of an election go, Canada can either have a majority or minority government. A majority government is one where the largest party controls a mathematical majority of seats in the House of Commons, which is what happens most of the time.

Sometimes, however, if there is a strong third party presence in the House, no one party will hold an outright majority and the division of seats will be more even. In such cases, the party with the largest number of seats, or plurality, forms the government. This is known as a minority government, since Government MPs will be mathematically outnumbered by the combined total of opposition MPs. A minority government must rely on the support of other parties to get its legislation passed, and can be no-confidence voted (see below) at any time. Current prime minister Justin Trudeau (b. 1971) was elected to a majority government in 2015, but was re-elected in 2019 with only a minority government, reflecting a decline in popularity.

It’s theoretically possible that in the context of a minority government, two smaller parties could join forces to form a combined majority in the House, which would then allow them to form the government together. This is known as a multi-party coalition government and it’s very common in Europe, where parliaments tend to be evenly divided among many small parties. In Canada, however, the coalition government idea is quite controversial, and has never been successfully attempted at the national level. Canada has a strong tradition of letting the plurality rule even if that plurality is very narrow. It’s not entirely clear who would be the prime minister or how the cabinet would be appointed in a coalition government, particularly if the idea is proposed at a time of political controversy (see sidebar). British tradition says the governor general of Canada would have to mediate the process, but this is a controversial idea as well, since the governor general is not elected. 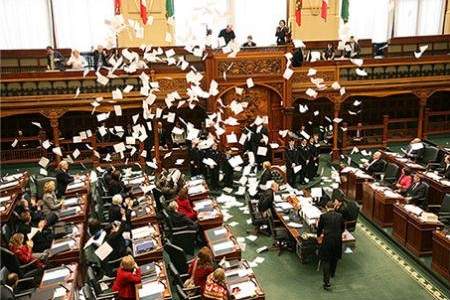 When a non-confidence vote passes, the tradition is for all the politicians to throw their papers in the air, symbolizing that everything they were currently working on is now worthless. Seen here, members of the Ontario Legislature participate in a so-called paper slide.

At any time, any member of the House of Commons can introduce a proposal known as a confidence motion that declares something to the effect of: “be it resolved this House no longer has confidence in the present Government of Canada.” If that motion passes, the House is said to have voted no confidence in the government, and the government must call an emergency parliamentary election, and win it, in order to remain in office.

So-called “party discipline” is one of the most defining (and controversial) characteristics of the Canadian parliamentary system. Essentially, party discipline means all MPs of a particular political party are expected to vote the same way all the time — the way the party leader wants. MPs who do not vote with their party leader may be punished in various ways, including being banned from running for the party in the next election. This is the main reason why votes of the Canadian parliament are not very interesting. A 2013 study from the The Globe and Mail found even the "most rebellious” MP still voted with his party leader 99% of the time.

New Canadian laws are generally dreamed up by the prime minister and his cabinet. A draft law is known as a bill, and after it’s written, a relevant cabinet minister will introduce the bill to the House of Commons.

After an initial vote to consider, a small committee of a few special members of the House will debate the details of the proposed bill and possibly make some changes. The House has over two dozen committees, each specializing in a different realm of policy — for example, the House Committee on Agriculture or the House Committee on Justice and Human Rights. Committees have members of all parties, but the majority party in parliament will always have the most members. Once a committee approves a bill it is sent it back to the full House for further votes of approval. After a majority of House members vote to approve, the bill goes to the Senate, where it goes through a similar process, but is usually quickly approved. It then goes to the governor general, who ceremonially signs it into law (known as giving royal assent).

Generally speaking, the parliamentary process of lawmaking is not very closely followed by the Canadian media or Canadians themselves. Any bill a prime minister wants to see passed almost always does, mostly due to Canada’s strong party discipline (see sidebar). It is the prime minister’s proposal of a new law that usually triggers the most intense period of debate, and when a government announces an unpopular bill, the most important opposition to it will generally come from the public or media, rather than from MPs in parliament.

The Role of the Senate

You may notice we have barely discussed the Canadian Senate in many of the above scenarios. This is because the Senate is a fairly inconsequential body in day-to-day Canadian government. It plays no role in the forming of governments or confidence votes, and instead functions as a mostly ceremonial body whose main purpose is quietly approving legislation from the House of Commons so it can become law. The Senate can theoretically veto, or reject, legislation from the House it does not like, but this very rarely happens, even when the Senate and the House are controlled by different political parties (which itself rarely happens for long). Because the Senate is not elected, it is seen as distasteful for it to get too involved in the lawmaking process.

The weakness (and some would say pointlessness) of the Senate has caused many Canadians to call for the Senate to be abolished, as is discussed in more detail in the Senate chapter.

More About the Canadian Parliamentary System 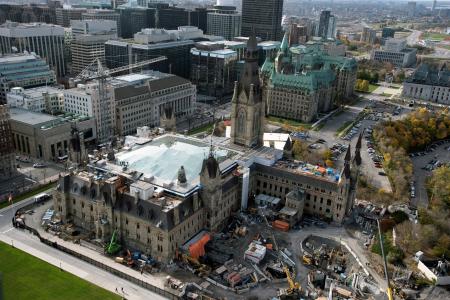 The Parliament of Canada is currently undergoing extensive repairs, which are not expected to be completed until at least 2029. The $863 million dollar undertaking, which is the largest masonry restoration project in Canadian history, has forced Canada's politicians to use new, more modern-looking, temporary chambers outside the parliament buildings for their debates and votes until the classic chambers are renovated and restored. 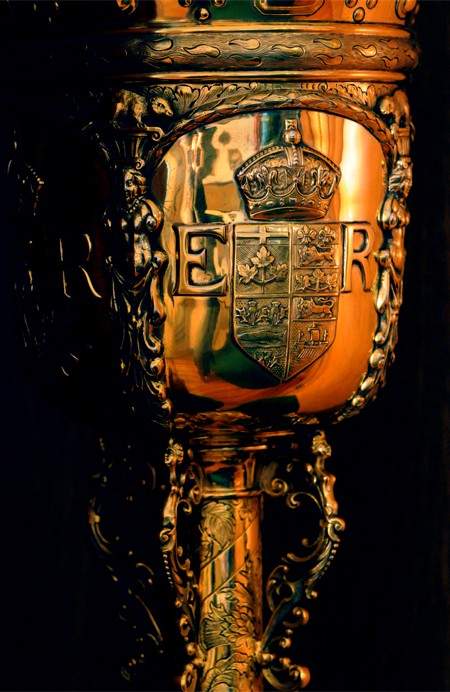 Both the House of Commons and the Senate have a large, ornate, ceremonial mace that is placed on a table in the centre of their chambers when a sitting is in progress. At the start of any sitting day there is a small ceremony in which the mace is moved from storage to its place on the table by a special official known as the mace bearer. Seen here, the House of Commons mace, engraved with the initials of Queen Elizabeth II (1926-2022).

The Parliament of Canada is currently undergoing extensive repairs, which are not expected to be completed until at least 2029. The $863 million dollar undertaking, which is the largest masonry restoration project in Canadian history, has forced Canada's politicians to use new, more modern-looking, temporary chambers outside the parliament buildings for their debates and votes until the classic chambers are renovated and restored.

Both the House of Commons and the Senate have a large, ornate, ceremonial mace that is placed on a table in the centre of their chambers when a sitting is in progress. At the start of any sitting day there is a small ceremony in which the mace is moved from storage to its place on the table by a special official known as the mace bearer. Seen here, the House of Commons mace, engraved with the initials of Queen Elizabeth II (1926-2022).