Provincial and Local Governments in Canada

Though the Canadian federal government is large and powerful, it can’t do everything on its own. Because the country is so vast, the Canadian Constitution gives many significant political powers to smaller governments located closer to the people they serve.

As the history chapter explains, Canada was founded in 1867 when several British colonies agreed to join together to form a single powerful federation. As part of the deal, all the governments of the individual colonies — which became known as provinces — were allowed to retain political control over certain local matters, while the national, or federal government was given control over larger, more complicated national issues. This method of sharing power between multiple levels of government is a philosophy known as federalism.

Sections 92 through 95 of the Constitution of Canada spells out what powers belong exclusively to the provinces. Among other things, this include the power to regulate:

Including forestry, electricity generation, and the collection of resource royalties.

Including grade schools, colleges and universities, and in some provinces, Catholic schools.

Including laws governing bars and restaurants.

Provinces can either create their own police forces or contract policing to the Royal Canadian Mounted Police.

This has been understood to include matters like public transportation, regulation of business, and property laws, as well as laws governing the powers of municipal governments. 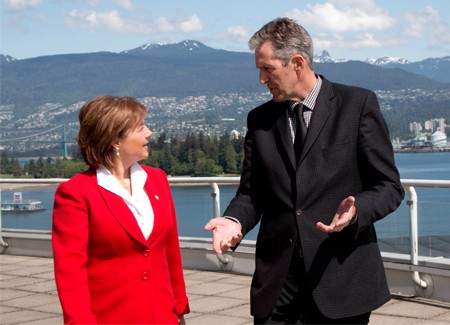 British Columbia's Liberal premier Christy Clark (b. 1965) chats with Manitoba's Conservative premier Brian Pallister (b. 1954) at a 2016 provincial premiers' summit in Vancouver. Since there are only ten provincial premiers, it is not too difficult for them to unite together for the purpose of lobbying the federal government. Premiers summits, which are sometimes grandly called The Council of the Federation are often occasions for joint calls for the federal government to do this-or-that — usually provide more funding for some provincial program.

The average Canadian’s interest in provincial politics is quite a bit lower than federal politics. Every province holds their provincial election at a different time, which can make it difficult to generate turnout, and provincial issues, which centre mostly around the administration and regulation of public services, are often not as interesting as national ones. Likewise, the party system of a province does not always match up perfectly with the national party system — some provinces don’t have the same political parties that exist at the federal level, or they may have different names, or they may simply be vastly less competitive — which can sometimes make deciding who to vote for a bit intimidating or confusing. 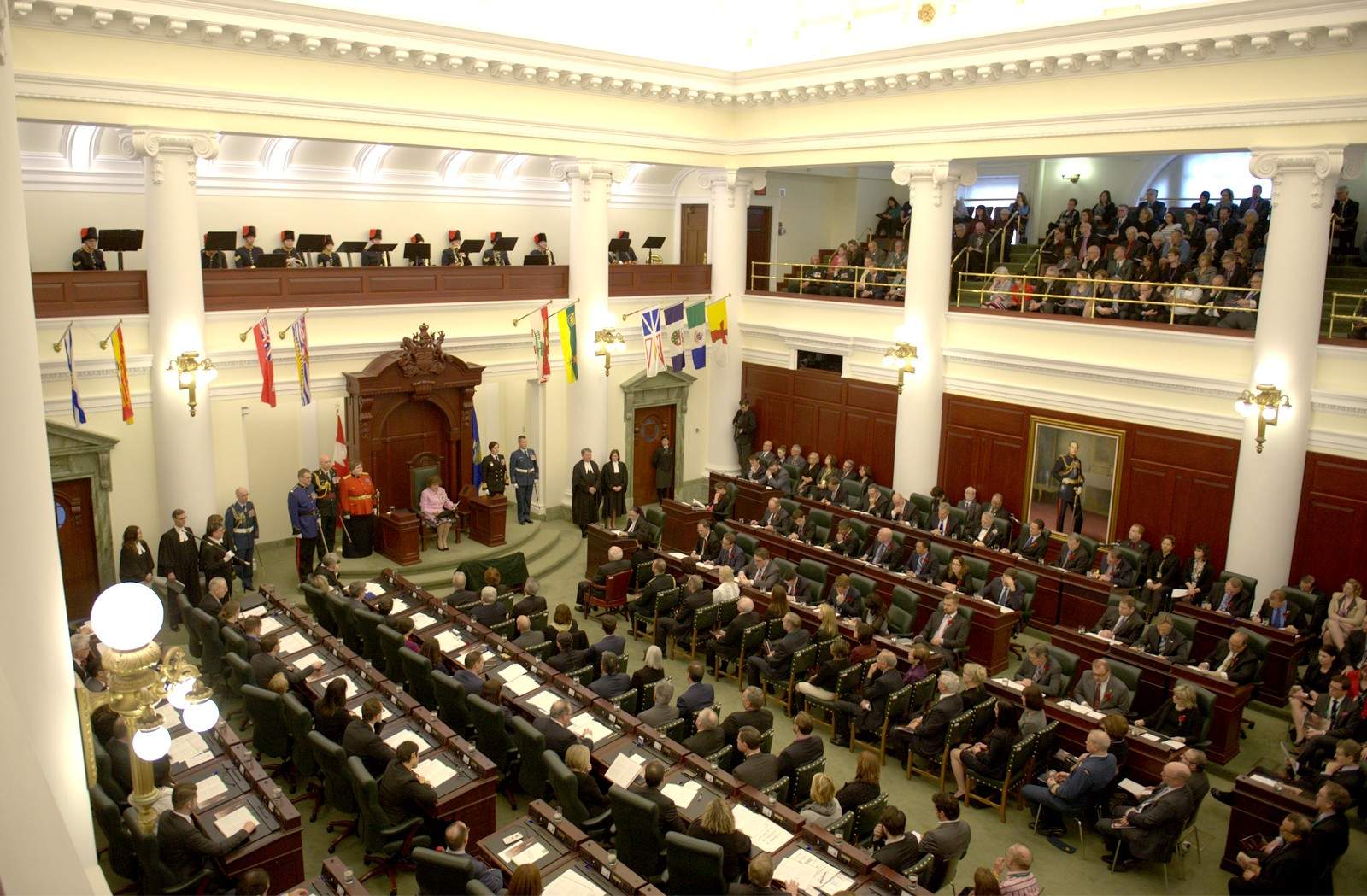 The Lieutenant Governor of Alberta delivers the 2016 Speech from the Throne to the Alberta parliament. 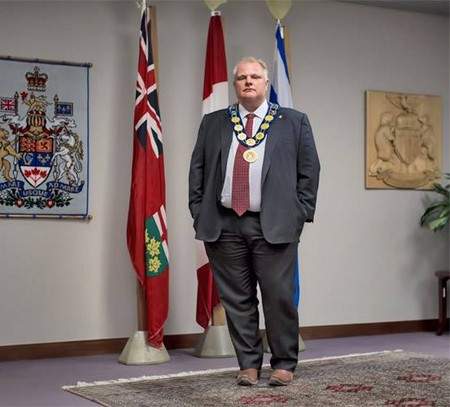 Canadian mayors wear an official "chain of office" during their term, with each link in the chain being engraved with the name of a mayor who came before. Seen here, Toronto's infamous former mayor Rob Ford (1969-2016).

Canada’s provinces are divided into municipalities, better known as cities or towns, which vary wildly in population and geographic size. Over five million people live in Canada’s largest city of Toronto, for instance, while there are some tiny towns in rural parts of the country with populations of less than 100. It’s up to the provincial government to set the borders of cities; in recent years, there has been a strong trend towards creating larger cities through the process of amalgamating, or merging, several smaller ones.

Municipal governments run these cities and enjoy only limited powers that have been specifically delegated to them by the province. Usually these include simple service duties such as maintaining the local water, sewage, and garbage collection systems, as well as the upkeep of facilities like fire departments, parks, libraries, and community centres. Larger cities tend to have their own municipal police force, as well. A law passed by a city to regulate some matter under its control is known as a bylaw.

Regardless of size, most city governments are structured the same way. A mayor serves as head of the government, while a city council of about a dozen or more members act as the legislature. Both are elected directly by voters on a fixed three- or four-year cycle, and in most provinces all of the province’s municipal elections are held on the same day. Municipal politics does not receive much coverage from the Canadian media and turnout in Canadian municipal elections tends to be very low. Partially as a result, Canadian mayors and councillors often serve long terms with very high rates of re-election. In many provinces, voters also elect various other boards and councils to assist the municipal government in specific areas, for example, a school board, library board, transportation board or parks board. In other places, these boards may be directly appointed by the city council itself. 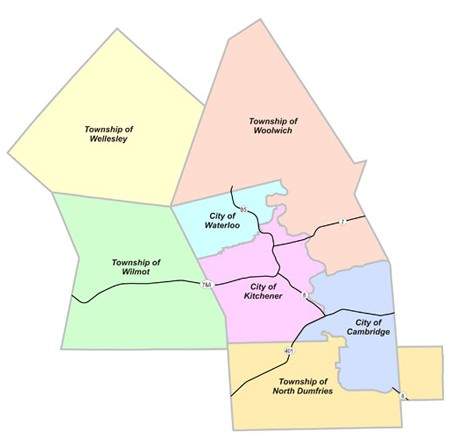 A map of the Region of Waterloo, a region in Ontario comprised of seven municipalities. Their regional government consists of eight elected councillors and one elected chair, along with the mayors of the seven component municipalities.

Between the authority of a province and a city sit what are known as regional governments, a sort of middle layer of government that tends to be the most obscure and unknown of the three. A region (also known as a county, division, or district, depending on the province) unifies several cities into one larger, geographic community.

The primary purpose of regional government is to coordinate the delivery of certain public services offered by the cities under its jurisdiction, such as garbage collection and sewer maintenance, in a more efficient way. Regional governments address issues that need to be handled at a higher level than cities or towns, but are still not quite important enough for the province to manage. Often run by an appointed regional board of individuals chosen by the city councils of its member municipalities, regional governments are so obscure their activities are rarely covered in much detail by the Canadian news media, and tend to be mainly of interest to city employees and municipal bureaucrats. 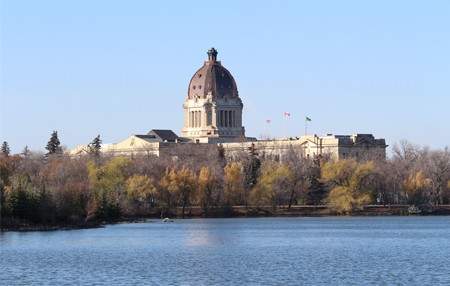 The Legislative Assembly of the province of Saskatchewan, located in the provincial capital of Regina. 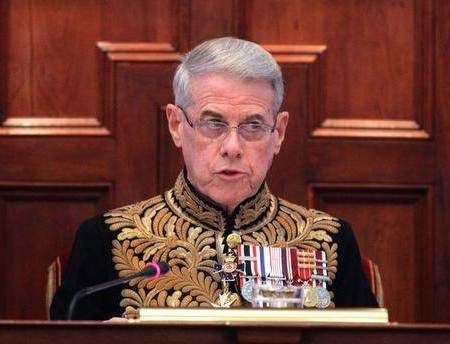 Canada's three northern territories are not provinces, and have "territorial governments" instead. While at one time there were a lot of important constitutional differences between the two, these days the only real difference between a provincial and territorial government is that a provincial lieutenant-governor is called a commissioner. The legislatures of the Northwest Territories and Nunavut do not use political parties, but the legislature of the Yukon territory does.

The Legislative Assembly of the province of Saskatchewan, located in the provincial capital of Regina.

Canada's three northern territories are not provinces, and have "territorial governments" instead. While at one time there were a lot of important constitutional differences between the two, these days the only real difference between a provincial and territorial government is that a provincial lieutenant-governor is called a commissioner. The legislatures of the Northwest Territories and Nunavut do not use political parties, but the legislature of the Yukon territory does.