As citizens of one of the planet’s oldest functioning democracies, Canadians have long held elections to pick their rulers. Elections provide Canadians with an opportunity to debate and decide the future agenda of of their government, and as such represent extremely important moments in Canadian history.

Canadian government is divided into three levels: federal, provincial, and local, and Canadians elect the politicians who run all three.

For the purposes of this chapter, we will mostly look at federal elections, though much of what is discussed applies equally to provincial elections, which follow all the same basic rules, only on a smaller scale. Elections for local governments, which do not follow the parliamentary system, are generally straightforward affairs in which candidates for all offices are directly elected by a simple plurality vote.

Evolution of Voting Rights in Canada

Canadian women are granted the right to vote in federal elections.

Status Indians are permitted to vote in Canadian federal elections.

British citizens can no longer vote in Canadian elections.

The Constitution of Canada says any citizen of Canada over the age of 18 is eligible to vote in a federal, provincial or local election. This includes Canadians living abroad, who can vote via absentee ballots at overseas embassies and consulates, and even Canadians in prison. The different levels of government keeps lists of eligible voters in every area of the country, and in order to vote on election day, citizens are expected to be able to confirm their identity, usually by showing voter ID of some kind, at the voting place.

For a while now, voter turnout in all Canadian elections has been steadily declining, a statistic that causes a great deal of outrage and disappointment among politicians, journalists, and academics. Depending on how you calculate it, in a typical federal election, only 45 to 60 per cent of Canadians will bother voting at all, and the numbers are generally far lower in provincial and local races. This disengagement is hard to blame on any one cause, but most analysts attribute it to a public that either feels cynical about the ability for politicians to effect meaningful change on the issues that matter to them, or is simply too ill-informed to feel comfortable casting a ballot.

Even though Canada is a country with no shortage of public political debate, a lot of Canadians still consider voting an intensely private matter, and asking about how someone voted remains something of a social taboo.

Canadian federal elections are formally announced by the governor general, who, upon request by the prime minister, dissolves (ends) the current parliament, making it necessary to elect a new one. Candidates then run for every single seat in the House of Commons, essentially turning 338 local elections into one enormous nation-wide event. The official campaign period usually lasts about a month, but these days there’s often a long period of pre-campaigning too, especially if the election date has been set in advance.

The timing of Canadian elections is a bit weird. Historically, only municipal elections were set on fixed dates, while provincial and federal elections could happen at any time. Under the terms of the Canadian Constitution, prime ministers and provincial premiers have a right to call elections whenever they please, so long as the election occurs within at least five years of the last one. In theory, this means it’s possible to have two federal or provincial elections within a few months of each other if the PM so decides, and this has actually happened a few times in Canadian electoral history. As you might imagine, this system could be easily rigged by politicians strategically calling elections when their poll numbers were highest, which led to the rise of the fixed election date movement in the early 2000s. Today, nine of Canada’s 10 provinces have set election dates (with the fixed election date required to be exactly four years after the last election), and the federal government passed similar fixed election date legislation of its own in 2007. However, these laws are all arguably unconstitutional and several have been ignored from time to time for reasons of political strategy. Emergency elections can also be forced through non-confidence votes in parliament or a provincial legislature. All of these things reset the election schedule.

At best, it may be most accurate to say that Canadian elections are held on fixed dates — except when they’re not. 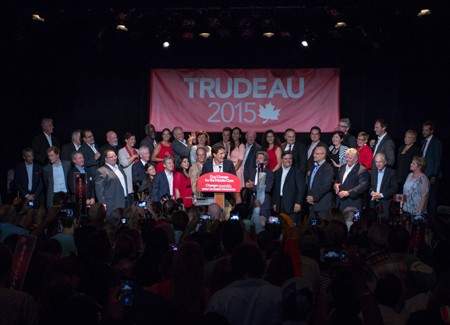 Liberal Party leader Justin Trudeau (b. 1971) speaks at a rally with his Quebec candidates in Montreal during the 2015 election campaign. The Liberal Party would proceed to win 184 seats in that election and Trudeau became Canada's new prime minister.

At the national level, attention is focused on the leaders of the main federal political parties, who campaign as candidates for the office of prime minister, which they win if they can get more members elected to the House of Commons than any of their rivals. As discussed in more detail in the political parties chapter, political parties in Canada are organized in a very hierarchical, top-down way, meaning that in any federal election, the most important elements of a party’s campaign platform — or list of promises to voters — will be crafted by the leader’s office and broadcast across the country via national media including TV, radio and the internet. Party leaders will tour the country, making high-profile photo op visits in electorally important cities and towns, and most news coverage will focus on what they say and do.

At the local level, the men and women running for seats in the House will campaign exclusively in their own electoral districts (also known as ridings), handing out flyers, knocking on doors and participating in local candidates’ debates. Much of what they promise and promote will be closely tied to their leader’s national campaign, since it’s only by electing enough local MPs that voters are able to install that party leader as PM, and thus have his promises fulfilled. 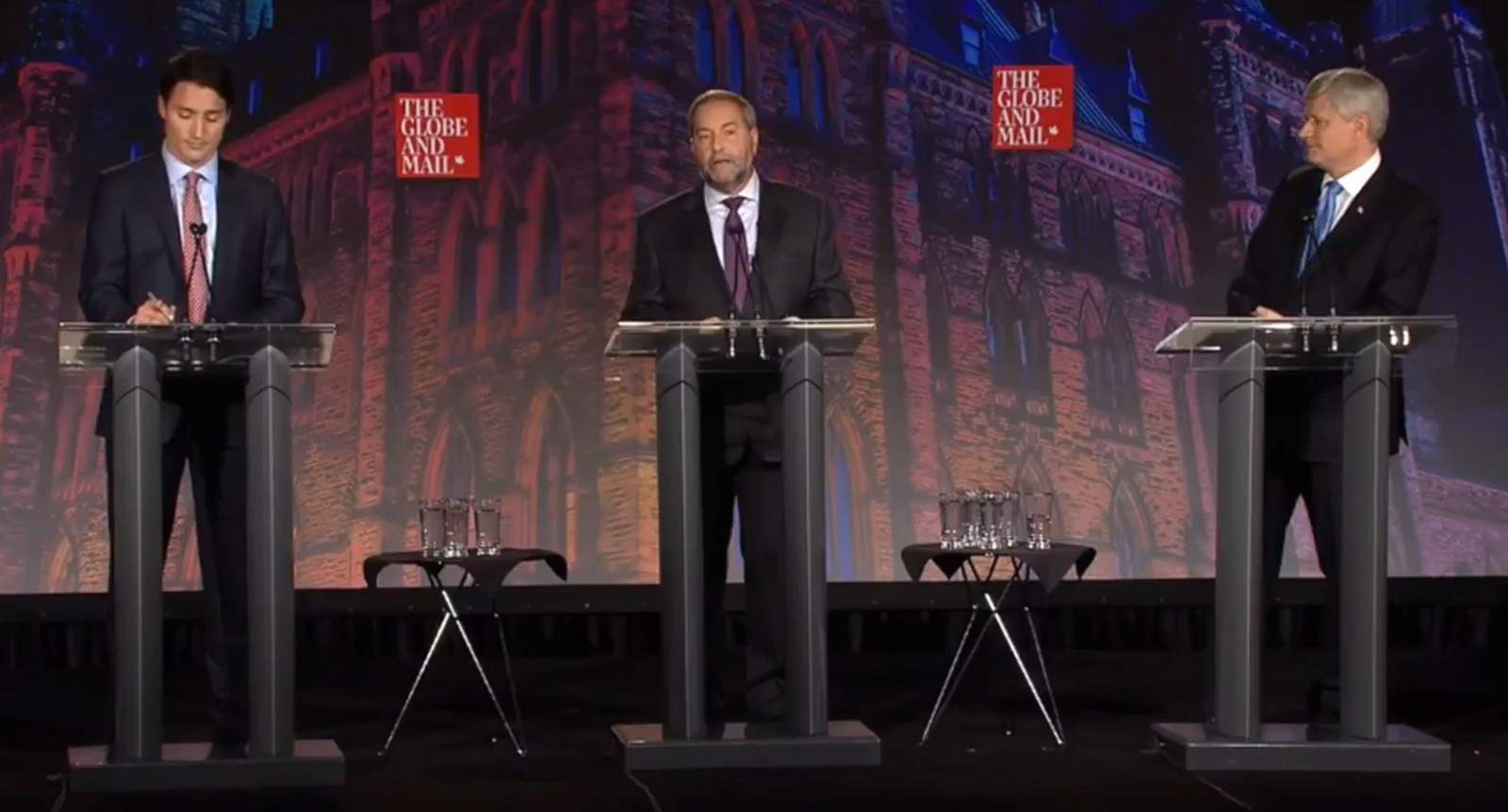 Canada's three main party leaders (and prime ministerial candidates) participate in a debate during the 2015 election.

Canadian election campaigns are generally big-budget affairs featuring an assortment of expensive gimmicks like cross-country tours, television commercials, glossy brochures, and rented buses with a giant photo of the leader’s face plastered on the side. This costs a lot of money, and campaign finance rules exist to prevent things from getting too out of hand.

Under the terms of the Canada Elections Act, the amount of money a political party and its candidates can spend is limited by a formula of approximately one dollar for every eligible voter in Canada. Parties can only raise money from individual donors, with the maximum donation rate capped at $1,500 per person, per party, per year. (It is illegal for Canadian political parties to take donations from corporations or labour unions). Corporations and unions themselves, as well as other so-called third-party activist groups are likewise limited to a budget of $150,000 for politically-themed advertising and activity during election periods.

Now, what exactly constitutes “political advertising” is not always clear, nor what is a “third party,” or even how long the so-called “election period” should be. If a small businessman wants to put up a billboard saying “the Prime Minister is awful” two months before voting day, should he be forced to comply with federal election laws that impose limitations on how much money he can spend on his project? In recent years, Canadian campaign finance laws continue to be tweaked and tightened, but they have also faced pushback in court from citizens who claim some of these regulations oppress their constitutional right to freedom of speech. 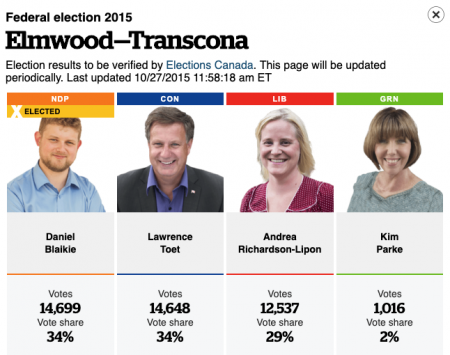 Frustration over candidates who get elected "despite the majority voting against them" — as seen here in the 2015 election for the MP of Elmwood-Transcona, Manitoba, where the winning candidate only secured 34% of the vote — has led to increasing calls for Canada to change its electoral system. It has proven difficult to find an alternative system that is more popular than the status quo, however, and voters in several provinces have explicitly rejected electoral reform in referendums.

Canada is one of the few countries in the world that uses the so-called “first-past-the-post” (FPTP) electoral system for all its elections. Under this system, the winning candidate is whoever gets the most votes, even if “the most” is not an outright majority. This is also known as the plurality system.

In a federal election, an MP candidate who can win the most votes in his or her district will be declared elected, thereby putting his or her party leader one step closer to becoming prime minister. It’s not terribly uncommon for some MPs in very competitive ridings to be elected with a share of the vote that’s around 40 per cent or lower. The national media tallies the combined votes of all candidates of all parties in all ridings into a grand total known as the popular vote, but this isn’t used for anything beyond public interest. It is actually possible for a party to elect the most MPs while also losing the popular vote; this is how Prime Minister Joe Clark (b. 1939) was elected in 1979, for instance. 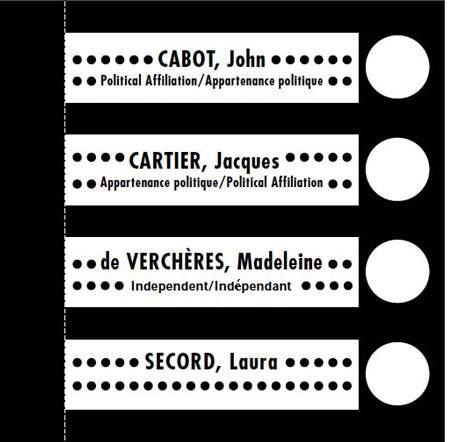 Ballots in Canadian federal elections have looked the same way for decades, and are marked with a pencil or pen. Seen here, an Elections Canada sample ballot featuring the names of various Canadian historical figures running in an imaginary election. Provinces and cities run their own elections and thus have different styles of ballots, with some places using electronic voting machines.

Ballots in Canadian federal elections have looked the same way for decades, and are marked with a pencil or pen. Seen here, an Elections Canada sample ballot featuring the names of various Canadian historical figures running in an imaginary election. Provinces and cities run their own elections and thus have different styles of ballots, with some places using electronic voting machines.