Canada and the United States of America are possibly the world’s two most similar countries. Their residents speak the same language, eat the same foods, have the same taste in entertainment, work in the same sorts of jobs, celebrate most of the same holidays, and share the same customs of daily life.

Yet sharing so much in common with a country as powerful and controversial as the United States can also breed contempt and insecurity, and Canadians spend a lot of time trying to come up with reasons why they are not like Americans. Or, just as often, why Americans are worse.

Judging, teasing and even hating America is a central part of the Canadian identity, and forms a persistant bias that runs through most aspects of Canadian society and culture. For various reasons, the default position of a great many Canadians is that America, Americans, and American things are generally bad, and need to be opposed. These feelings are not always logical and consistent, and are often hypocritical in practice. Yet they do exist, and understanding their powerful role in shaping Canadian society is a vital part of understanding what makes Canadians Canadian. 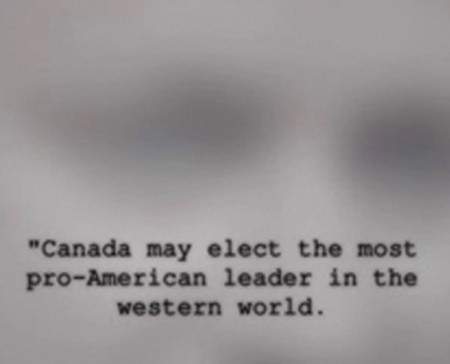 During Canada's 2006 federal election, the Liberal Party ran attack ads blasting Conservative Leader Stephen Harper (b. 1959) for being too "pro-American." Harper's team countered by denouncing the ads themselves as "American-style" gutter politics.

As two very similar countries, Canada and America obviously can learn a lot from studying one another. An idea that works well in one country may be worth importing into the other, while an idea that fails in one will probably fail on the other side of the border, too. Canadian politics frequently embraces the latter principle to an exaggerated degree, with America often presented as a deeply dysfunctional, broken nation, and thus a country that Canada should be very careful to avoid copying.

The “American-style” slur is more commonly leveled at conservatives by liberals than vice versa, in part because it’s popular on the Canadian left to view Canada as a country defined by an embrace of progressivism, while portraying America’s flaws the result of the country’s conservatism. But rare is the Canadian politician or party who hasn’t found some occasion to accuse his opponent of being too “American” at one time or another — no matter how forced the analogy may be. 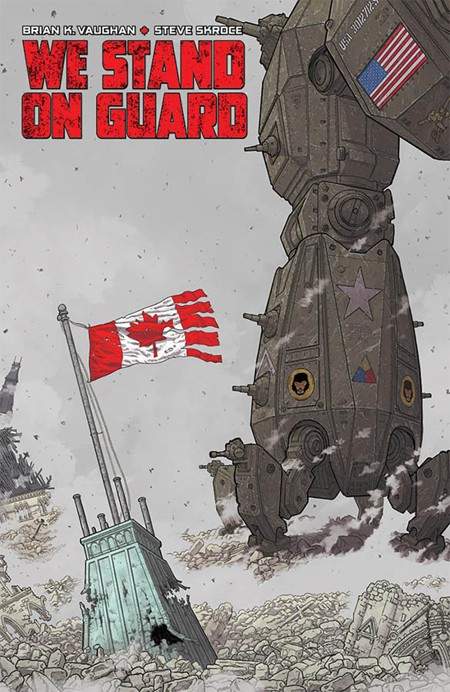 A running trope in Canadian pop culture is comparing Americans to Canadians — a comparison that rarely has the Americans coming out well. If a Canadian character is witty, worldly, sophisticated and modern, you can count on the American character to be hickish, dumb, boorish and sheltered. Another favourite is the stereotypically ignorant American painfully uninformed about Canada; a yahoo who expects to see dogsleds on every street corner and a beaver-skin hat on every head.

In the early 2000s, the Molson Canadian beer company ran a number of hugely popular ads that played on this theme, showing cool Canadian guys striking back after being confronted by obnoxious American douchebags. One particularly famous one, dubbed “The Rant” (see below), consisted of a cool Canadian aggressively comparing Canada to the U.S. (“I believe in diversity, not assimilation! Peacekeeping, not policing!”), before dramatically finishing with, “My name is Joe… and I AM CANADIAN!” The actor became a huge national star, and was even recruited by the Canadian government to recite “the rant” at Canada Day festivities across the country.

As discussed in the pop culture chapter, made-in-Canada media is not tremendously popular in Canada, and most Canadians are fully capable of enjoying (and relating to) the American actors, characters and settings found in American movies, TV, and books without much difficulty. But this can breed a kind of insecurity unto itself, and aggressive reminders of “why we’re better” delivered through anti-American jokes, gags, stereotypes, and insults remain popular tropes of Canadian entertainment.

"My noisy neighbors revel in Canada's two hockey golds at the 2002 Olympics because 'We beat the Americans in America!' The first gay couple to wed in Ontario tells the press, before they say anything else, that they are glad they don't live in the United States. A PR person at the hospital where I work, who has been eager to talk to me about a book I've published, puts down her pen when she learns that I'm American and that the book is nearly devoid of 'Canadian content.'"

U.S. medical sociologist Nora Jacobson sharing her experiences living in Canada in a 2004 column in the Washington Post. 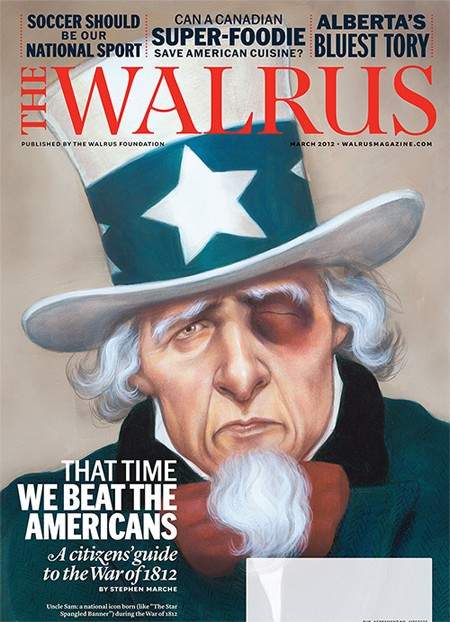 The cover of the February 2012 edition of "The Walrus," a left-leaning current affairs magazine, celebrates the bicentennial anniversary of the War of 1812 without much subtlety. The 1812 War continues to be a source of tremendous patriotic pride and romanticism in modern-day Canada for its reputation — as this cover suggests — of being "that time we beat the Americans."

Why Are Canadians Anti-American?

Attempting to find a single root cause of the sometimes subtle, sometimes intense anti-Americanism in Canada is a complicated task, and many Canadians have written about it at length. Generally, the most commonly held conclusion is that by vilifying America, Canadians are able to create a collective identity for themselves. Especially in an era where Canadians and Americans are becoming more similar in their lifestyles, behaviour and culture, there is strong pressure for Canadians to focus on the ways their country still remains different, and indeed, superior.

Others may interpret Canada’s history as being one long struggle against “U.S. domination,” making anti-Americanism a sort of Canadian founding mission. Canadians partial to this perspective will view the United States as the single greatest threat to Canadian sovereignty, and a country that is always on the brink of conquering Canada — not just militarily, but culturally, politically and economically as well. Canadian history books usually make much of episodes like the War of 1812, Irish-American attacks on Canada during the mid-1800s (the “Fenian Raids“) and other instances where Americans seemed to be plotting the “annexation of Canada.” The implication is Americans have a long habit of looking at Canada with hungry eyes, and Canadians must remain ever vigilant. As mentioned, this also frequently manifests in the form of left-wing politicians and activists who fear what further American encroachment would mean for the future of Canadian progressive values and social programs.

One final explanation may be immigration. Though a lot of immigrants come to Canada for non-ideological reasons such as economic opportunity, family unification, safety or convenience, there have always been more than a few immigrants who settle in Canada precisely because they want to come to North America but don’t want to live in the more popular United States because they dislike some aspect of American culture, politics or society. It should also be noted, however, that during the Vietnam War (1964-1973) and to a lesser extent the George W. Bush presidency (2001-2009), a large number of Americans emigrated to Canada because they themselves disliked some element of their home country.

A 1988 campaign ad from the Liberal Party of Canada. At the time, the party was ferociously opposed to a plan for free trade with the United States, which the Conservative Party was pushing. 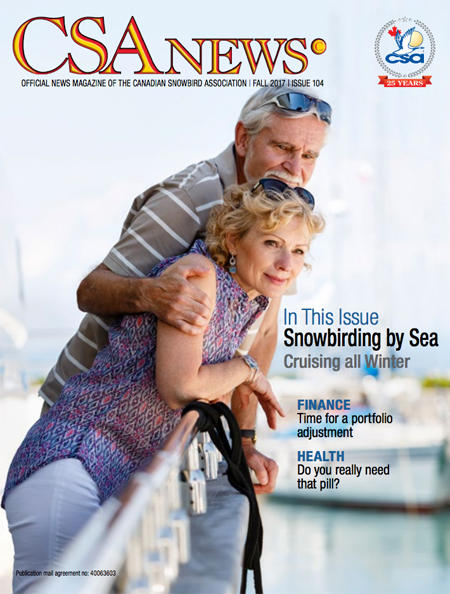 An issue of CSA News, the official magazine of the Canadian Snowbird Association. When the weather gets cold, a lot of Canadians travel down to warm American states like Florida, California, and Arizona to holiday. This is particularly popular among retired Canadians, who may even own a second home in the U.S. These people are known as "Snowbirds," and form a significant lobby group in both the U.S. and Canada when it comes to forming immigration and travel policy.

In the end, however, Canada’s cultural anti-Americanism should not disguise the very real way Canadians often casually or unconsciously think of themselves as Americans in day-to-day life. Most Canadians generally take it for granted that American studies or polls on topics like social behaviour, spending habits, family trends and personal psychology apply equally to their country, for instance, and it’s very common to hear Canadians speak of “North Americans” as one giant cultural group, in contrast to Europeans or Asians or other “real” foreigners. One of the great troubles of Canada’s entertainment industry, in fact, is that Canadians are almost too familiar and comfortable with American TV shows, music and movies (which barely seem foreign at all), meaning it’s often quite difficult for supposedly “distinctly Canadian” content to generate much public interest. To many, the phrase may even be an oxymoron.

A great struggle of Canadian existence is how to make peace with these two conflicting realities. How does one appreciate the reality of being very similar to an American while also holding a sense of pride in being something distinct and separate? It’s not a question with an easy answer.

More about anti-Americanism in Canada 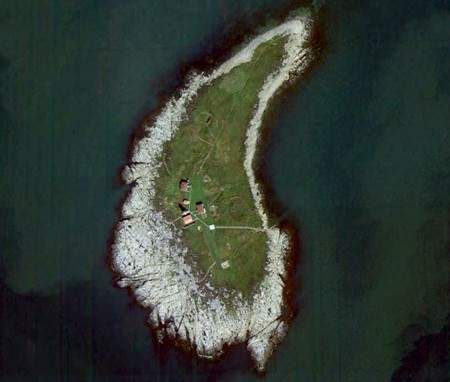 Canada and the United States only have one formal land dispute, a tiny island known as Machias Seal Island located on the part of the U.S.-Canadian sea border that separates the province of Nova Scotia from the state of Maine. Though this ambiguity causes some mild tension for lobster fishermen in the area, the island is ultimately so small and useless (it contains nothing but a lighthouse) there has been no pressure for the two governments to resolve it.

During the 19th century, editorial cartoons in Canada and Britain often portrayed Canada as a delicate young woman in danger of being wooed by a lecherous Uncle Sam. Seen here, a cartoon by the British cartoonist Tom Merry (1853-1902) depicting England's "John Bull" ignoring the dangerous seduction of one of his colonies. 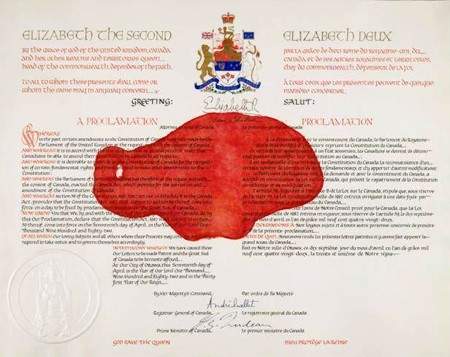 During the Cold War, the United States often tested cruise missiles in the Canadian prairies. Upset over this, in 1983 a protester gained access to the national archives and dumped red paint on the Canadian constitution, permanently staining the country's most important document.

Canada and the United States only have one formal land dispute, a tiny island known as Machias Seal Island located on the part of the U.S.-Canadian sea border that separates the province of Nova Scotia from the state of Maine. Though this ambiguity causes some mild tension for lobster fishermen in the area, the island is ultimately so small and useless (it contains nothing but a lighthouse) there has been no pressure for the two governments to resolve it.

During the 19th century, editorial cartoons in Canada and Britain often portrayed Canada as a delicate young woman in danger of being wooed by a lecherous Uncle Sam. Seen here, a cartoon by the British cartoonist Tom Merry (1853-1902) depicting England's "John Bull" ignoring the dangerous seduction of one of his colonies.

During the Cold War, the United States often tested cruise missiles in the Canadian prairies. Upset over this, in 1983 a protester gained access to the national archives and dumped red paint on the Canadian constitution, permanently staining the country's most important document.