Much of Canada’s success as a prosperous, modern, industrialized nation has been credited to the country’s strong tradition of high-quality schools, which remain among the most respected in the world. 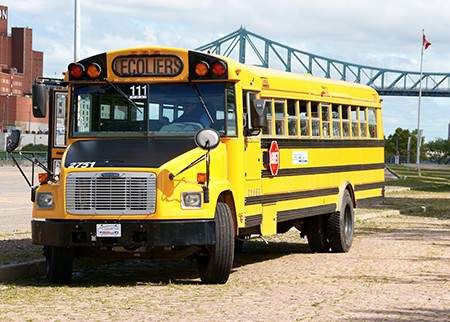 School buses, which take children to school and back every day, are an essential part of life for millions of Canadian students, particularly those who live in remote or rural communities.

For 13 years, from the ages of five to 18, Canadian children are legally required to attend school from 9 a.m. to 3 p.m., Monday through Friday, from September to June. Free public schools are provided by the provincial governments, and students attend 13 different grades for each year in the system, starting with Kindergarten, followed by grade 1, then grade 2 and so on until grade 12. These 13 grades — often called the “K to 12” years — are usually separated into three phases: elementary school, middle school, and high school, meaning most Canadian children will attend at least three different physical schools before completing their mandatory years of education.

It’s difficult to firmly state when elementary school (or any other phase of grade school) begins and ends in Canada, since every province has its own cutoff dates, often set by local school boards. In the majority of cases, however, the “elementary” years usually span from Kindergarten to around sixth or seventh grade.

Kindergarten classes are often considered little more than glorified babysitting and exist mostly to help socialize very young children into a classroom setting, with simple activities such as counting, singing, colouring, and games. Some parents will even put their kids into even simpler preschool classes when they’re still toddlers, though these are not mandatory.

As children grow older and more mature, the early numbered grades gradually educate students on basic concepts in the world of math, science, history, geography, and civics, but with a strong focus on “hands-on” learning and creative projects. In most elementary classes, all subjects are taught by a single, all-purpose teacher, with students usually progressing to a different teacher after completing a grade or two. 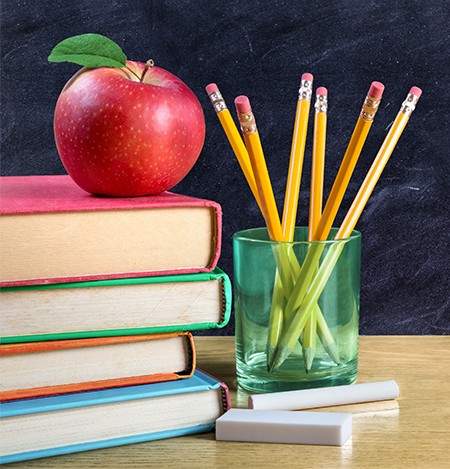 For reasons that aren't entirely clear, apples are a common symbol associated with schools and teachers in Canada, and often feature prominently in education related merchandise and stock footage.

In many provinces, middle school (or junior high) is a fairly new invention, designed to help facilitate the transition from the easygoing climate of elementary school to the more structured and demanding world of high school. Kids usually attend middle schools in their early teen years — often from around age 13 to 15 — though again, it varies a lot from province to province.

Middle school introduces the concept of different subjects being taught by different teachers, with students moving from classroom to classroom after the conclusion of each lesson. The subject matter remains mostly the same as in elementary school, but now with considerably more detail and stricter standards of grading. The focus begins to shift from creative projects and group activities to written assignments and test-driven learning. 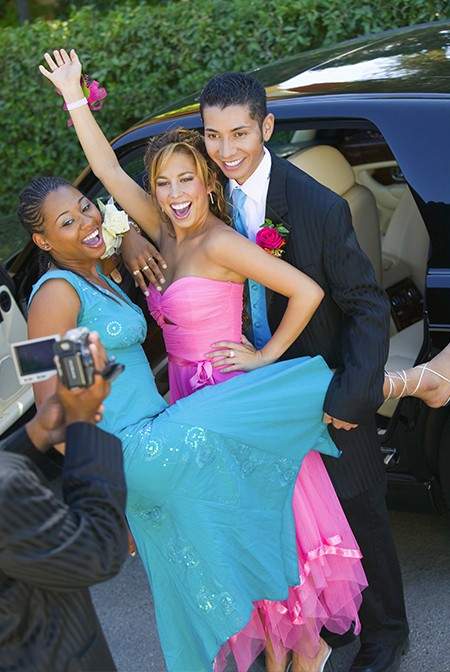 After completing the long, 13-year slog of grade school, many students are understandably eager to celebrate. Most schools are happy to oblige, and Canadian high schools will traditionally organize a special party for students known as prom or grad near the end of the school year. Students enjoy dressing up, limo rides, a fancy meal, and lots of dancing. Hopefully, everyone can find a date.

High school marks the most demanding phase of Canadian public education — both educationally and socially — and spans the late teenage years. It concludes with a fancy graduation ceremony at the end of grade 12, when most students are 18 years old. Even once they’re well into adulthood, a lot of Canadians look back at their high school years with particularly vivid memories. For many, high school marks the rite of passage from childhood to adolescence, and heralds the start of interest in “adult” activities like dating, driving, and alcohol, along with all sorts of new emotions and personal drama.

In high school, classes are now much more specialized and specific. Rather than simply “science,” for example, students may take courses in physics, biology, or chemistry, offering much more emphasis on honing academic knowledge in one particular direction. Written assignments and tests become significantly longer and more detailed, and teachers stricter and more demanding.

In order to successfully complete high school, and thus their entire grade school education, students must pass provincial exams in several subjects. These are written by the provincial government and intended to provide definitive assessment as to whether or not students have learned everything the government considers important. Failing to get decent marks on provincial exams can make it quite difficult to get admitted into a good university, while failing to pass them all is a pretty intense social taboo that can severely limit one’s ability to find decent work. With such high stakes, exam time is generally the most stressful period of a student’s K-12 education.

In order to protect the survival of French communities outside Quebec and English communities inside it, Canada's Constitution spends a fair bit of time establishing "Minority Language Education Rights." Basically, if a parent can prove their child belongs to a French or English minority community, they have a right to be educated in that language. If the community's size is "sufficient," the government must provide them with a school.

Canada’s provincial governments are supposed to avoid endorsing any one religion over another, and for this reason any religious school must be privately-run. The exception is Catholic schools, which are publicly-funded in the provinces of Alberta, Saskatchewan, and Ontario, a holdover from a time when Catholics were such a small and persecuted minority in Canada it was considered important for the government to protect their right to educate their children in their faith. Today, it’s not uncommon for secular families to enroll their kids in Catholic schools simply because their educational and discipline standards are assumed to be higher. In practical terms, the main difference between Catholic schools and non-Catholic ones is the former will include at least some religious studies classes as part of their mandatory curriculum.

A uniquely Canadian twist on traditional public education is French Immersion schooling, which is when a school in an English-speaking province teaches students entirely in French in order to help make them fluent in Canada’s second official language. Popular with highly ambitious parents who dream of their children getting high-paying government jobs, the programs tend to fill up extremely quickly and there are often long wait times before a student will even be considered. In French-speaking Quebec, English schools are equally popular, but a child’s ability to enrol in one is severely limited by provincial laws designed to discourage their use. Only children of parents who were also educated in English are able to enrol.

A very small fraction of Canadian parents opt their children out of both public and private schools and educate themselves at home, in a practice known as homeschooling. This is perfectly legal, though homeschooled kids must still eventually pass government-mandated exams in order to have their education officially recognized. Homeschooling tends to be most popular with religious Canadians, rural families, or those with very conservative or libertarian political beliefs. 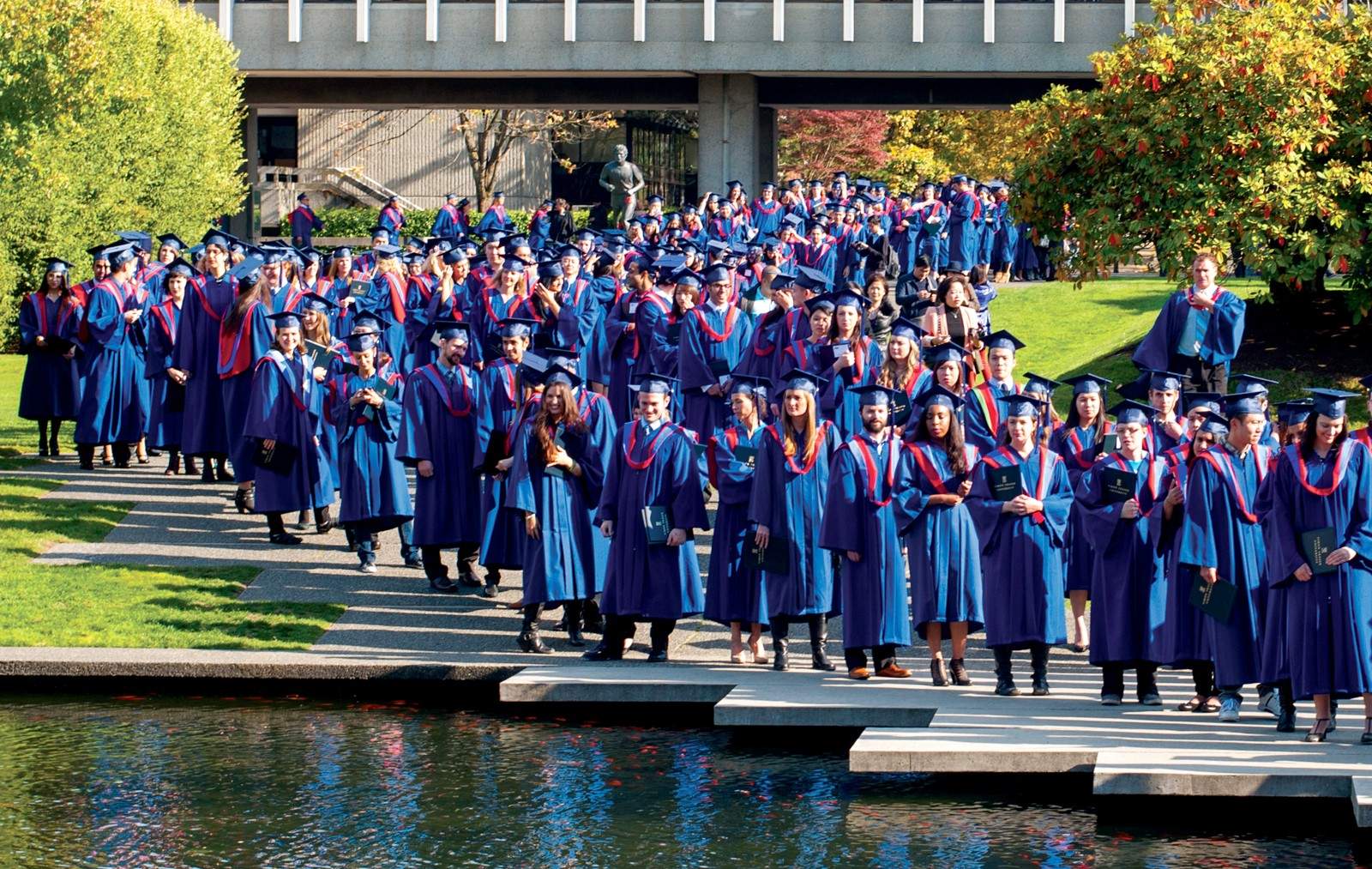 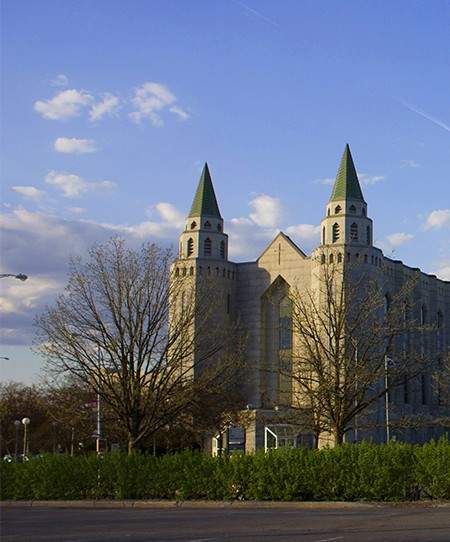 After graduating high school, a minority of Canadian teenagers proceed to enrol in college or university to continue their education for several more years. A college, in Canadian language, is usually a small community school mainly focused on vocational or trade training or granting university credits, while a university is an institution that grants degrees. It’s common to attend college for a few years before enrolling in university, especially if one’s grades were not high enough to earn admittance immediately after high school.

Canadian universities, like universities elsewhere in the world, issue degrees in a vast array of subjects, including art, science, education, medicine, and law. Degrees are sorted into three basic tiers: Bachelor’s (BA), Master’s (MA), and Doctorate (PhD). Broadly speaking, a BA will take at least four years to earn and will require taking a variety of fairly intensive classes that will require writing several long research essays and exams in order to pass. A master’s degree or doctorate will take considerably longer and will require the additional step of re-applying to the university’s graduate school program, which has much tougher standards for admission.

These days, more Canadians are attending college and university than ever before, both because most Canadian post-secondary schools have been physically expanding to accommodate greater numbers of students, and also because rising incomes and new student loan programs have made post-secondary education far more affordable — at least in the short term. A lot of respectable, white-collar jobs in Canada now require their employees to possess at least a BA, meaning the status is not nearly as elite as it once was. It’s currently estimated that around 50 per cent of Canadian adults hold at least some sort of post-secondary degree — a global high.

Canada's top five universities, according to the Times Higher Education 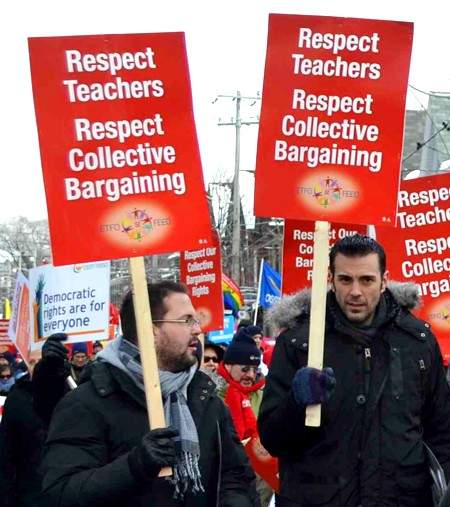 All public school teachers in Canada are unionized, and the relationship between the teachers' unions and their provincial government employers is often tense. Seen here, members of the Elementary Teachers Federation of Ontario protest a 2012 government-imposed contract.

Around five per cent of Canadian families choose to opt out of the public school system and enroll their kids in private schools, which are funded by tuition fees and thus cost money to attend. Though these schools usually have smaller budgets, they generally enjoy higher academic ratings and produce students with higher grades. They’re also quite expensive, however, and remain controversial for precisely this reason. How much of a role should family wealth play in determining one’s quality of education?

All public school teachers in Canada are unionized, and the relationship between the teachers' unions and their provincial government employers is often tense. Seen here, members of the Elementary Teachers Federation of Ontario protest a 2012 government-imposed contract.

Around five per cent of Canadian families choose to opt out of the public school system and enroll their kids in private schools, which are funded by tuition fees and thus cost money to attend. Though these schools usually have smaller budgets, they generally enjoy higher academic ratings and produce students with higher grades. They’re also quite expensive, however, and remain controversial for precisely this reason. How much of a role should family wealth play in determining one’s quality of education?